Don’t forget to share your own news with us by emailing Irene Kim at kimi@strose.edu.

Wari Isaac ’20 has begun working on his MBA at Saint Rose.

Henry Cumoletti G’17, a social studies teacher at Albany High School (Albany, New York), was featured in the “Perspectives in Learning” series of the City School District of Albany.

Karolyn Eberhardt ’14, Olivia Faure ’17, Rukan Khondker ’16, Robert Richburg ’76 G’89 (retired), David Bulan ’91 (retired), Dianne Rieck ’77, ’97, G’87 (retired), are all current or recently retired music teachers with the Ichabod Crane Central School District, which was recognized as a Best Communities for Music Education by national music-education organization The NAMM Foundation. According to NAMM, the designation is awarded to districts that demonstrate outstanding achievement in efforts to provide music access and education all students.

Justine (McGovern) Vaitas ’14 was named Teacher of the Year at River Ridge Academy (Bluffton, South Carolina). She was also in the news last June for her work with students with disabilities.

Lyssa Merle Irizarry ’13 and Timothy Irizarry ’12 were married on July 21, 2018, and counted several Saint Rose classmates in their wedding party. “We got together in March 2013, but met as friends in 2011,” they add.

Chelsea Izzo ’13, G’16, a fourth-grade teacher at Yates Elementary School (Schenectady, New York) received a Donors Choose grant to provide supplies to help her students learn at home during the COVID-19 shutdown. She slyly quizzed the students on what they most needed, and sent them packages full of books, games, and whatever else they were lacking, such as toothpaste and toothbrushes, and even a pair of sneakers. 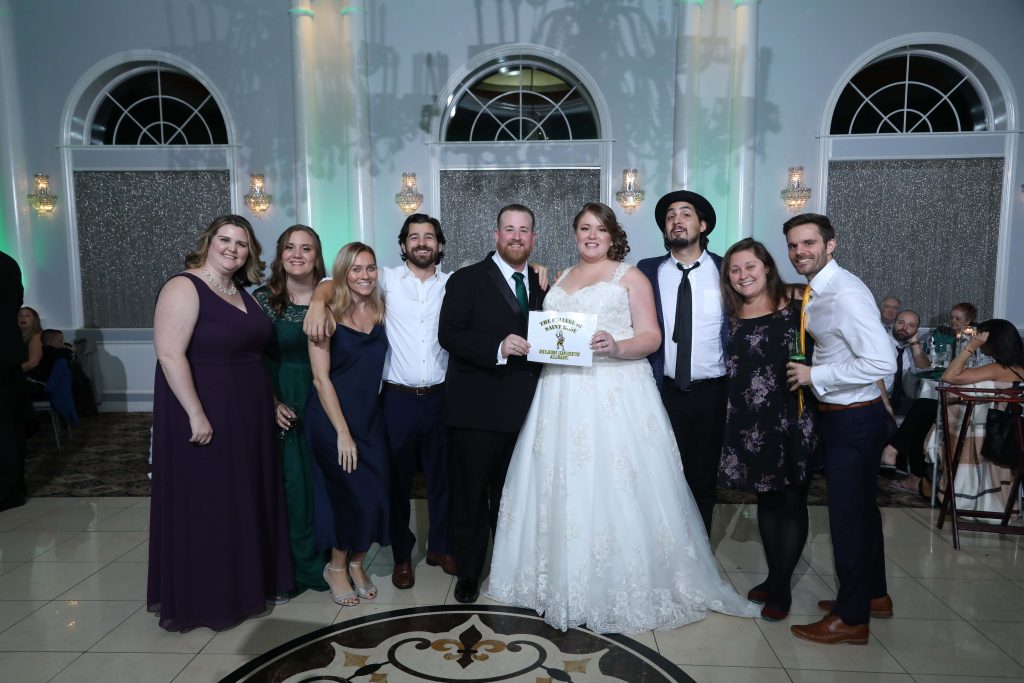 Erin Kilkenny ’12 reports: My husband, Kevin Ford ’10, and I got married on 11-9-19. We both attended and met at Saint Rose in February 2009. At our wedding, we took a Saint Rose alumni photo holding a Saint Rose sign. We left Saint Rose with great educations, friendships that will last a lifetime and each other. Also, in the picture with us are two other happily married couples that also met at Saint Rose. The photo includes: Lauren Gordon (Critelli), Kayleigh Bowles (Buboltz), Kaitlin Mangone (Roth), Anthony Mangone, Kevin Ford, Erin Ford (Kilkenny), Salvatore DeTillio, Mishelle DeTillio (Stapleton), and Tim Wentz.

Benjamin Lamb G’11 was interviewed as one of Businesswest’s “40 Under Forty.” He is director of economic development at 1Berkshire (Pittsfield, Massachusetts area).

Rachael Mann ’10, G’11, G’12 was in the news for converting her SUV into a pop-up classroom for a student who was having a little bit of trouble keeping up with the rest of the class. Mann, who had noticed that the student was falling behind and was having difficulty with remote learning, is a special education teacher for the Colonie school district (Colonie, New York).

Leah Ascher ’09 was featured in “Perspectives in Learning,” published by the City School District of Albany (Albany, New York).

Steve D’Agostino ’08 kept his Dags Basketball training enterprise going during the COVID-19 pandemic shutdown first by posting free workouts, and then adding paid videos and live Zoom group sessions as well. He found that engagement with athletes ramped up considerably, with young players sending him back videos of their own workouts and sharing them with their own communities.

Casey O’Connor ’98, head coach of Christian Brothers Academy (Albany, New York), was interviewed for his efforts to help his baseball players stay connected with college coaches for recruitment purposes, and his efforts to keep the Suburban Council baseball tournament going in the face of uncertainty.

Ken Trzaska G’97 was chosen as a finalist for the presidency of Lewis and Clark Community College (Godfrey, Illinois).

Jillmarie Murphy ’89 is a professor of English and director of gender, sexuality, and women’s studies at Union College (Schenectady, New York).

Ellen Keegan ’68 was mentioned in a newspaper article for her nonprofit organization, Books for Troops, in conjunction with a high-school student who began her own book drive.