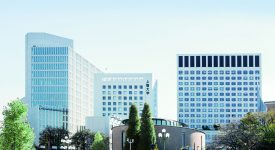 Sophia University, considered one of Japan’s top private universities, is a private Jesuit institution of higher education founded in 1913 and located in the heart of Tokyo. The university is home to more than 14,000 students and offers programs ranging from bachelor’s degrees to doctoral degrees. Sophia draws 1,148 international students from more than 60 countries and from all parts of the world. Its faculty includes members from more than 20 countries.

“Global connectedness is a strategic plan goal for Saint Rose, and we are pleased to have entered a partnership with another institution of higher education that places the same value upon learning across cultures,” Stefanco said. “The College’s Center for Global Affairs looks forward to working with Sophia University on many future initiatives.”

A report issued in Fall 2017 by the Institute for International Education noted that the population of students from other countries currently studying in the United States increased by 3.4%. The top two states to which international students come to study consistently remain California and New York, with the percentage studying in New York State increasing by 3.6% from 2016 to 2017.