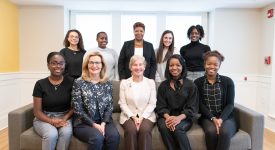 For the second time, The College of Saint Rose has received a grant for more than $1 million from The Pussycat Foundation to support the BOLD Women’s Leadership Network at Saint Rose.

The $1.2 million grant is intended to empower a select group of young women leaders, known as BOLD Scholars, to address important issues in their communities. The Pussycat Foundation was founded by Helen Gurley Brown, best known for reinventing Cosmopolitan magazine, and was named after Brown’s favored term of endearment.

The BOLD Women’s Leadership Network operates at six colleges and universities throughout the United States, including Saint Rose. Among other needs, the funding helps underwrite BOLD Scholars’ college costs, enabling them to focus on their education, leadership development, and career launch. Currently, 14 juniors and seniors at Saint Rose serve as BOLD Scholars.

“We are so proud to count the BOLD Women’s Leadership Network among our women’s leadership initiatives at Saint Rose, which, even though it is a co-educational institution today, was founded 100 years ago to provide greater access to higher education for women,” said Saint Rose President Carolyn J. Stefanco. “Our BOLD Scholars are incredible women, who are bright, driven, and determined to meet the needs of the times through excellence in education and later in their chosen careers, which speaks to the founding mission of the College. We are grateful to The Pussycat Foundation for its passion for developing the next generation of diverse women leaders.”

In April 2018, Saint Rose announced that it had received $1.1 million from The Pussycat Foundation – $100,000 for a Helen Gurley Brown Genius Grant awarded to Saint Rose President Carolyn J. Stefanco as a way to “champion women of superior accomplishment” and $1 million to establish the BOLD Women’s Leadership Network at Saint Rose.

The Borisenok House also serves as the hub for another Saint Rose initiative, the Women’s Leadership Institute, which supports the ongoing advancement of women leaders in the Capital Region of New York, the United States, and throughout the world, through education, advocacy, and collaboration. Launched with the opening of the Borisenok House, the Women’s Leadership Institute hosts workshops, speakers, and conferences.

Saint Rose will serve as the site for the 2020 International Leadership Association (ILA) Women and Leadership Conference from June 7 to 10, 2020, bringing together women and men from across the country and around the world. The Women’s Leadership Institute also has partnered with the Times Union’s Women@Work, the fastest-growing network of businesswomen in the Capital Region, on a first-ever national View on Women (VOW) poll. The poll will examine pervasive and underlying attitudes about women in order to address the social, political, and economic issues that impact them.

The first class of seven BOLD Scholars will graduate from Saint Rose in May 2020.

“Since I was in high school, I wanted to see more women in diverse roles in the music industry,” said Belinda Ligotino, a senior BOLD Scholar studying music industry at Saint Rose. “The BOLD funding provided me with the opportunity to intern with the international nonprofit organization Women In Music, which works to advance equality, diversity, and opportunities for women and individuals in the music industry.”

About The Pussycat Foundation: The Pussycat Foundation has been actively awarding grants since 2012 to organizations, programs, and individuals that align with the mission and values held by Helen Gurley Brown. Areas of concentration are empowering women, youth, and innovation. The organization was founded in Brown’s honor and is named after her favorite term of endearment.

About the BOLD Women’s Leadership Network: Including Saint Rose, the BOLD Women’s Leadership Network currently operates at six colleges and universities: Ithaca College; Middlebury College; Colby-Sawyer College; the University of Connecticut; and Rutgers University – Newark. The initiative envisions collaboration across institutions of higher education to address issues on their campuses, particularly those related to leadership development. Each partner institution is led by a woman president at the time of selection, who has demonstrated commitment to diversity and inclusion throughout her career. BOLD Scholars may apply for a Helen Fellowship which, if selected, allows them to provide their own salary for employment at a nonprofit organization.