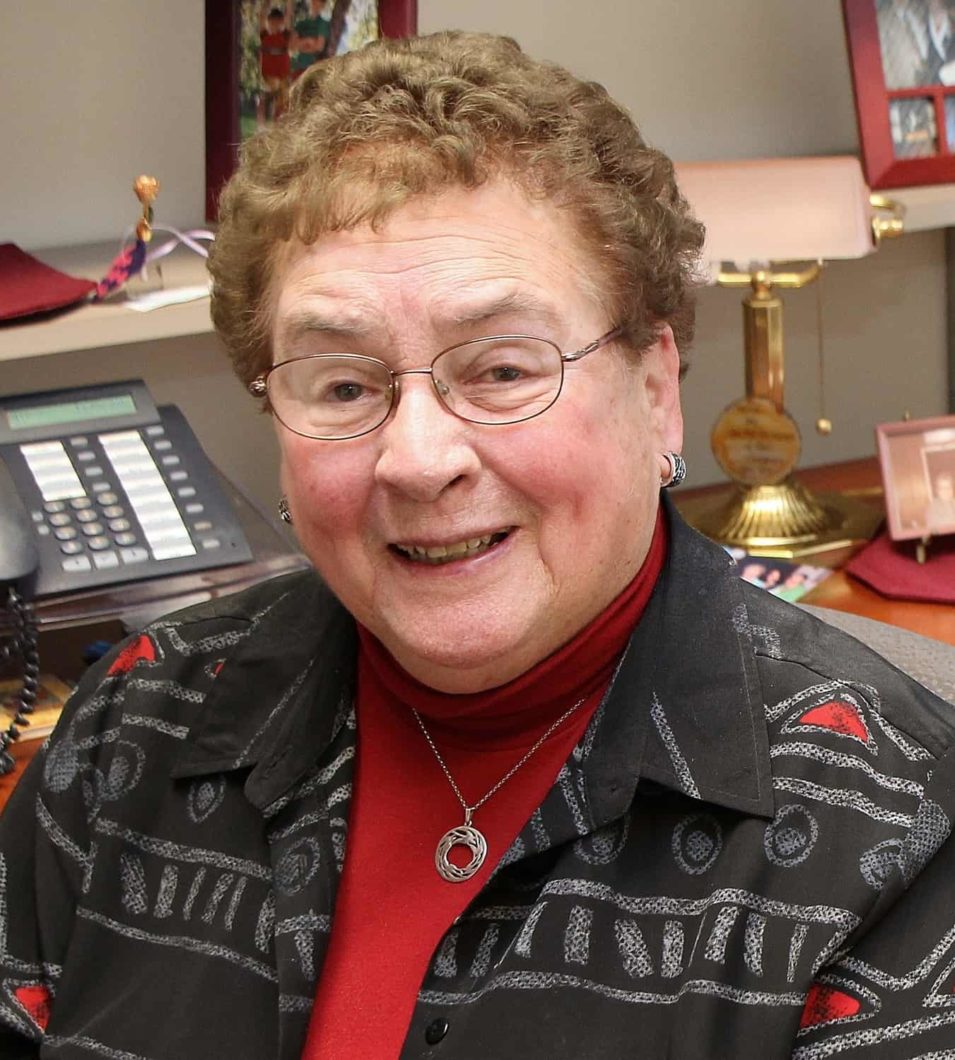 The College of Saint mourns the loss of Sister Charleen Bloom ’57, CSJ, Ph.D., who passed away on July 16 at age 83. Bloom, known as “Sister Char,” brought the communication sciences and disorders program at Saint Rose into prominence and established an intensive workshop for people who stutter that serves as a national model and continues to thrive after more than 40 years.

Under Sister Char’s leadership, Saint Rose became a premier center for students and those seeking help with communication disorders, including stuttering and other challenges to fluency. She founded the five-year communications and sciences disorder dual degree program and led it for 20 years. Sister Char also helped steer the program to coveted national accreditation with the American Speech-Language-Hearing Association (ASHA), created the College’s Council for Effective Communication, and was instrumental in establishing the Pauline K. Winkler Speech-Language-Hearing Clinic at Saint Rose, a facility where students gain required practice and community members receive crucial services.

An author, speaker, educator, and innovator, Sister Char not only shaped the education of countless students but influenced researchers and practitioners throughout the speech-language pathology landscape.

“Sister Char was a pioneer who continues to inspire generations of students and educators,” said Saint Rose President Carolyn J. Stefanco. “While we mourn her passing, her spirit remains ever-present throughout our community as she has helped so many people find their voice.”

Sister Char was born in Albany and grew up in a house on Partridge Street now owned by Saint Rose and re-named Bloom Hall in her honor. She came to Saint Rose to study education and soon became inspired by the Sisters of St. Joseph of Carondelet. She left the College following her sophomore year to enter the CSJ community, and, after taking her vows, she completed her undergraduate degree at Saint Rose.

She earned advanced degrees in communication disorders: a master’s degree from The Catholic University in 1967, and a Ph.D. from the University of Illinois in 1970.

Known for bringing together science and humanity, Sister Char pushed communication sciences and disorders to the cutting edge at Saint Rose, while ensuring that her teaching and practice would continue to benefit students, instructors, and patients for generations to come. When she felt that she needed to learn more about the clients and families she worked with, she earned a Master of Social Work from the University at Albany. She then added a required counseling course to the Saint Rose communication sciences and disorders curriculum.

Speaking about Sister Char in 2017 before she received the College’s highest honor, the Carondelet Medal, Dr. David DeBonis ’79, an audiologist and professor of communication sciences and disorders at Saint Rose, said “She is a combination of gentle and strong. She is a true humanist; her spirituality shapes her life. She also knows how to use her gentleness.”

She was the author of two books and numerous articles and book chapters. She presented at conferences worldwide and was a Fellow of the American Speech-Language-Hearing Association. Among her many honors, she was named among the Capital Region Chamber’s Women of Excellence in 2011.

A tireless advocate of excellence in learning, Sister Char continued working until her retirement in 2012, at the age of 77. Even as her mobility became more limited in recent years, she continued to engage in research on the cognitive wellness of members of the Sisters of St. Joseph as they age.

In her Carondelet Medal acceptance remarks during the 2017 Saint Rose commencement ceremony, Sister Char shared a quotation from CSJ founder Father Jean-Pierre Medaille that could easily describe her own dedication to the many people she helped throughout her career: “Dare to risk, dare to meet the needs of the time, dare to promote unity, and dare to love all people without distinction.”

The wake for Sister Charleen Bloom, CSJ, will be held in the chapel of the Sisters of St. Joseph of Carondelet Provincial House, 385 Watervliet-Shaker Road in Latham, on July 23 from 4 to 7 p.m. with the prayer service following at 7 p.m. The Mass of Christian Burial will be in the Provincial House chapel on July 24 at 10:30 a.m.