Saint Rose graduate Garth Joseph stood among hundreds of students in the crowded halls of the Times Union Center on Saturday, May 11, rattling off the various loved ones who came to support him at the 96th annual commencement ceremony for The College of Saint Rose.

His mom, sister, kids, mother-in-law, brother-in-law, adopted sister (a Saint Rose alum), coaches, and friends were there to cheer on his success — and for a good reason.

“It was a long time in the making,” Joseph said, an interdepartmental major who — at 7-foot-2 — left Saint Rose in 1997 to pursue a professional basketball career.

After more than two decades of playing basketball in the United States and around the world and starting a family, he came back to Saint Rose to finish what he began. Now, having earned his bachelor’s degree, he has aspirations to become a mentor, teacher, and coach to other students.

Joseph is one of nearly 1,400 undergraduate and graduate students to have their degrees and certificates recognized at the 96th annual commencement. A total of 1,609 bachelor’s degrees, master’s degrees, and certificates were awarded to a diverse group of students, who represent a student body hailing from 34 states and 61 countries.

A crowd of more than 5,000 people watched, while many others viewed the ceremony via livestream from their homes.

Before the ceremony began, the halls brimmed with students who wore decorative caps, snapped selfies, and wiped away tears before they marched across the stage and, eventually, into their futures. 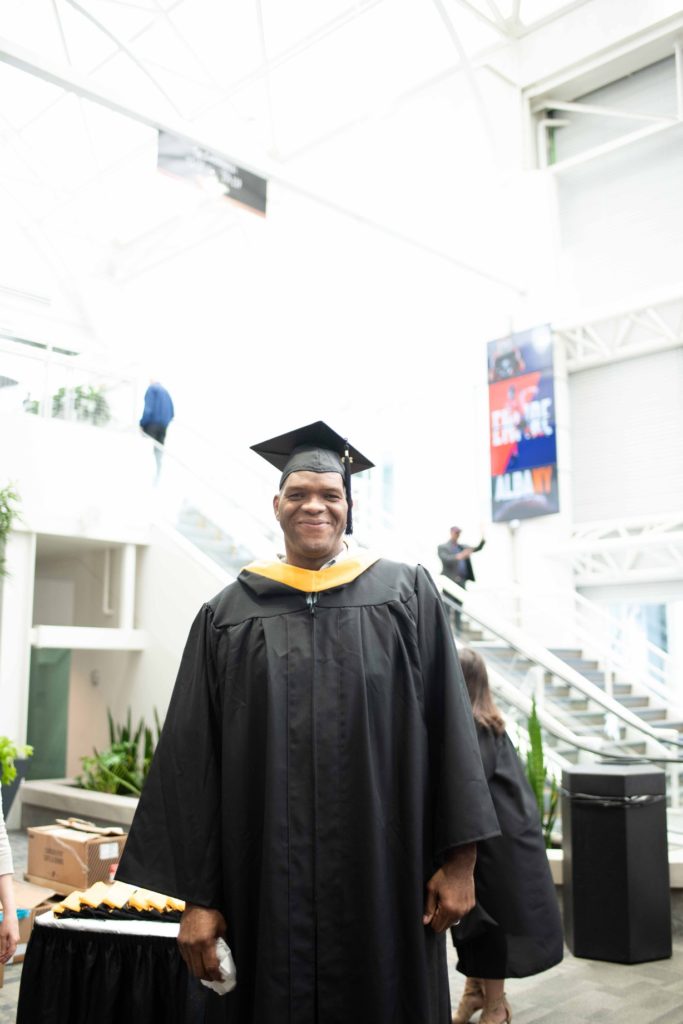 Among the excited soon-to-be graduates was Marys Christie ’19, a political science major who was beaming with pride while discussing the next steps in her career. After graduation, Christie will work full-time for New York State Assemblywoman Diana C. Richardson before continuing her education at law school.

“It feels amazing. It is bittersweet. There are so many memories that I made here and so many friends, and I am so excited for the possibilities after I cross that stage,” she said.

After the Class of 2019 took their seats on the floor of the Times Union Center, Saint Rose President Carolyn J. Stefanco greeted the students with an inspiring speech about her personal journey through higher education. First, as a first-generation college student and, then, as a woman leader.

Speaking about the importance of perseverance and women’s leadership, Stefanco celebrated the $1.2 million gift from alum and trustee Michelle Cuozzo Borisenok ’80 and her husband, to fund the building for the new Women’s Leadership Institute and BOLD Women’s Leadership Network.

President Stefanco noted that the College was not only growing more diverse in the racial and ethnic background of its students but was broadening its reach to student veterans and their families, as well as students from all over the country and the world.

She encouraged students to draw from the College’s social justice history and their individual experiences at Saint Rose to make a difference in their lives and the lives of others.

“Never doubt the value of what you have earned through your determination,” said Stefanco. “Your degree is yours forever and will pave the way for your future.” 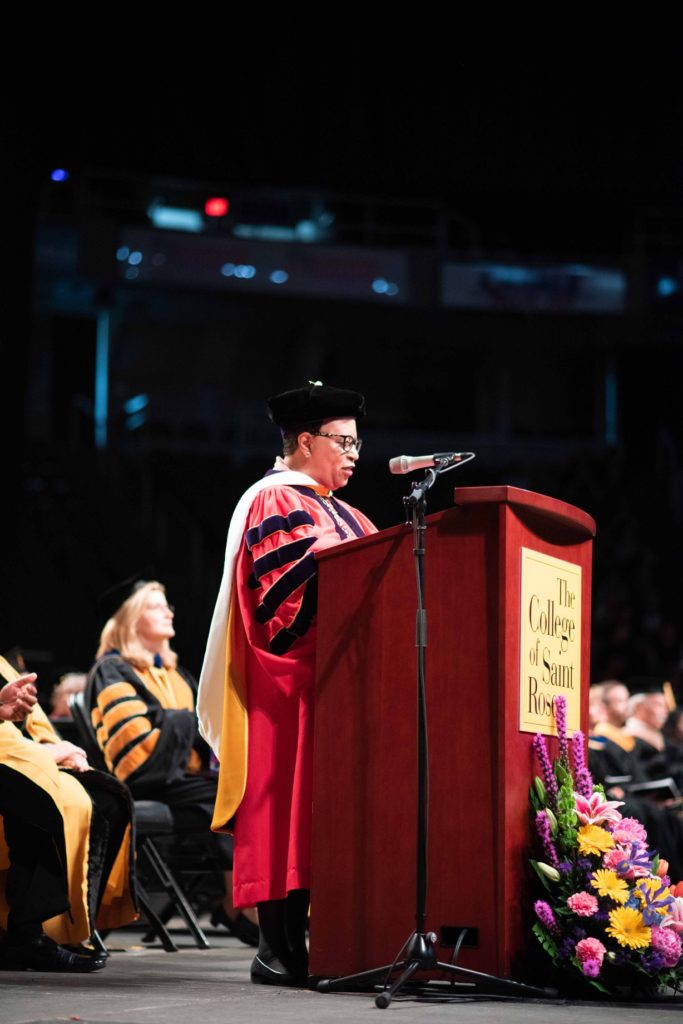 “What the world really needs is well-educated people, as many as possible, from all backgrounds and all disciplines to address our greatest challenges,” Jackson said. “The most meaningful of challenges that we can be immersed in are, of course, the ones that allow us to uplift others.”

She spoke of her own journey from segregated Washington D.C. in the 1950s to a career as a noted physicist, chair of the U.S. Nuclear Regulatory Commission, a National Medical of Science recipient and, now, president of RPI.

Along the way, she said she had suffered the indignity of having her classmates at MIT. exclude her, and a professor advised her that “colored girls should enter a trade,” but her academic excellence ultimately spoke for itself.

“And by the way,” she added. “I did so well in his class that this professor invited me to work in his laboratory. And I’d like to think that I taught him something, that physics is a perfectly appropriate trade for a young African American woman.”

The racism hurt, but Jackson explained that she figured out how to distinguish between what happens by chance and how she might choose to respond.

“Chance had made me an African-American female, a heritage I proudly embrace,” she said. “I also saw that I had a choice here. I could give in to ignorance or persevere and pursue excellence.”

“It was a wonderful speech,” said Joseph, who is now 45 years old, leaving the commencement with his wife, Alicia, and three young daughters. “As the father of bi-racial daughters, it was very inspirational. You are born a race by chance. The way you choose to live is a choice.” 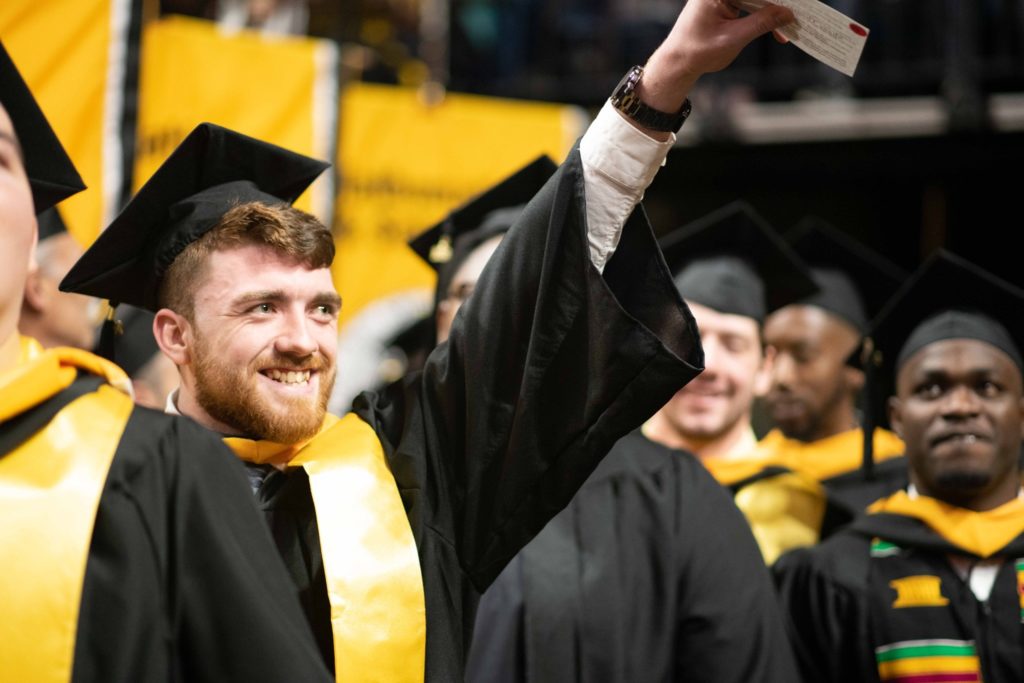 Myrdel Geffrard made the choice to leave her home in Haiti to pursue a B.S./MBA with a finance concentration, hoping to one day, after gaining additional work experience in the United States, return home and help build up the economy there.

“I will be the first in my immediate family to receive a graduate degree, so it means a lot to me,” said Geffrard, fighting back tears as she described what the day meant to her. “It has been a lot of hard work. I feel like when you work hard and you believe in your dreams it’s possible.”

After the ceremony, families and students poured out of the arena and onto the streets of downtown Albany, congratulating each other with hugs, flowers, and balloons.

Renee Kochinski, a communication sciences and disorders major, said she was proud to watch her friends walk across the stage. She said over the past four years, Saint Rose provided her with the opportunity to participate in community service and build relationships with her professors.

Next up for Kochinski is to continue her education and pursue a clinical doctorate in audiology at the University of Pittsburgh.

“I will be in school for four more years,” she said.

Nageshkumar Vyas, a student from India, earned his M.S. in Computer Science and reflected on his new accomplishment and future goals. Vyas plans to continue to work as a software developer for Mintex Tech in New Jersey. Although his family could not make it to commencement, he said he knew they were celebrating his achievement back home.

“This was a proud moment for me as an international student,” he said. “Everybody wants to progress in life, right?” 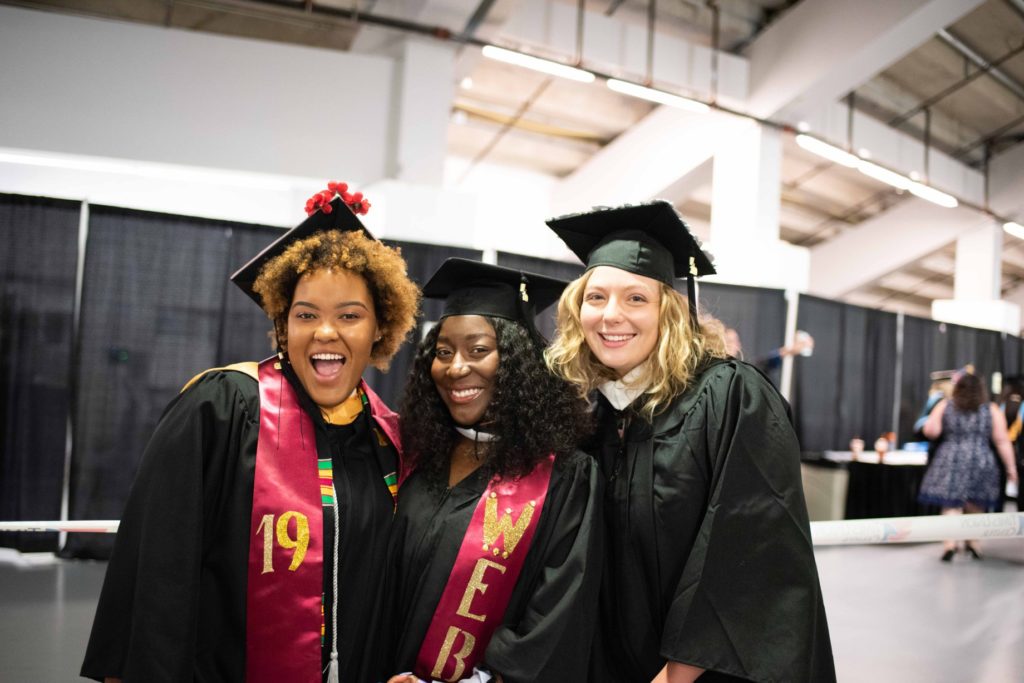