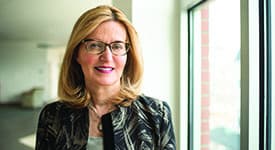 Carolyn J. Stefanco, president of The College of Saint Rose, is one of eight college presidents selected to join the Commission on Independent Colleges and Universities (CICU) board of trustees. CICU’s 26-member board is comprised primarily of presidents of member institutions as well as representatives of CICU’s sister organization, the Council of Governing Boards, which represents university trustees.

CICU has represented the public policy interests of New York’s 100-plus private, not-for-profit colleges and universities for more than 60 years. CICU advocates on their behalf with state and federal officials for student aid funding and other programs that help students achieve their college dreams.

Stefanco also serves on the board of the National Association of Independent Colleges and Universities (NAICU).

Founded in 1956, The Commission on Independent Colleges and Universities (CICU) in New York represents the chief executives of New York’s 100+ independent (private, not-for-profit) colleges and universities on issues of public policy. Member colleges compose the largest private sector of higher education in the world and confer 50% of bachelor’s degrees, 73% of master’s degrees, and 79% of doctoral and first-professional degrees earned in New York state.