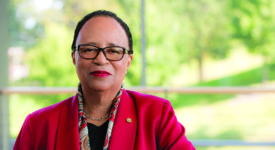 Dr. Shirley Ann Jackson, the 18th president of Rensselaer Polytechnic Institute (RPI) and the first African-American woman to earn a doctorate from the Massachusetts Institute of Technology (MIT) and to lead a top-ranked research university, will serve as the featured speaker at the 96th annual commencement for The College of Saint Rose on May 11 at the Times Union Center. She will also receive an honorary doctor of humane letters from Saint Rose.

Dr. Jackson, who became the first woman and first African-American president of RPI in 1999, will speak about her groundbreaking journey in the field of science and her rise to leadership as both a woman and a person of color. Her distinguished career includes senior leadership positions in academia, government, industry, and research. Time Magazine has called her “perhaps the ultimate role model for women in science.”

“In the same year that we launched the first cohort of our BOLD Women’s Leadership Network Scholars and our Women’s Leadership Institute at Saint Rose, we are thrilled that Dr. Jackson, a trailblazer in the world of science and for women everywhere, will be our commencement speaker,” said Saint Rose President Carolyn J. Stefanco. “In addition to being the president of a renowned Capital Region institution of higher education and a global leader, Dr. Jackson is also a valued friend. I am honored that our graduating students will have the opportunity to be inspired by her exceptional life and career, which has made a tremendous impact on the world.”

A theoretical physicist, Dr. Jackson holds an S.B. in Physics and a Ph.D. in Theoretical Elementary Particle Physics – both from MIT. In addition to the doctorate from MIT, she has been awarded 54 honorary doctoral degrees.

In 2016, President Barack Obama awarded Dr. Jackson the National Medal of Science, the nation’s highest honor for contributions in science and engineering. In 2014, Obama appointed Dr. Jackson as co-chair of the President’s Intelligence Advisory Board. The board assessed issues pertaining to the quality, quantity, and adequacy of intelligence activities; the effectiveness of organizational structure, management, and personnel; and the performance of all agencies of the federal government engaged in the collection, evaluation, or production of intelligence, or the execution of intelligence policy.

It was one of numerous presidential appointments under Obama as well as under President Bill Clinton, who appointed Dr. Jackson chairperson of the U.S. Nuclear Regulatory Commission (NRC) from 1995 to 1999. The NRC licenses, regulates, and safeguards the use of nuclear reactor byproduct material in the U.S. and is charged with the protection of the public health and safety, the environment, and the common defense and security.

Dr. Jackson also is a fellow of the American Association for the Advancement of Science (AAAS), having once served as its president and chair of the AAAS board of directors. She is a director for the IBM Corporation, FedEx Corporation, and Public Service Enterprise Group Incorporated.

The commencement ceremony will begin at 10 a.m. at the Times Union Center, 51 S. Pearl St., Albany.