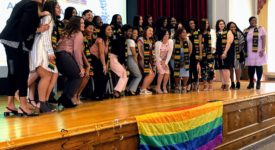 The College of Saint Rose Office of Intercultural Leadership hosted the ALANA and Lavender Reception on April 7 in Saint Joseph Hall Auditorium to celebrate historically underrepresented and/or traditionally marginalized students in one of their most important milestones – graduation.

The reception is an opportunity for the Saint Rose community to acknowledge and honor student achievements and contributions to Saint Rose and the broader community. The following students were honored: