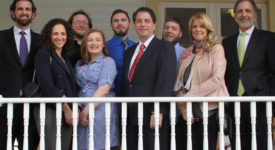 For the 10th consecutive year, The College of Saint Rose has been named a Military Friendly® School by Victory Media, publisher of G.I. Jobs and other publications for military personnel. The College also has been ranked No. 1 in the nation among “Gold Standard” private colleges not offering a doctorate. This is the fourth year in a row Saint Rose has been given the No. 1 designation.

The 2019-2020 Military Friendly® Schools list, which was announced online this month, will be published in the May issue of G.I. Jobs magazine. The list can also be found at http://www.militaryfriendly.com/.

The “Military Friendly® School” designation from Victory Media is based on surveys completed by colleges and universities, as well as veterans. The surveys cover academic policies and compliance, admissions and orientation, culture and commitment, financial aid and loan repayment, graduation and career outcomes, and military student support and retention. The rankings also factor in an analysis of key data that measure some of the same indicators.

“Last October, we were proud to hold a ribbon-cutting ceremony for our new Veteran Residence, which houses student veterans and service members,” said Saint Rose President Carolyn J. Stefanco. “That project was made possible through the generosity of the Massry Family, who have been longstanding supporters of Saint Rose and our student veterans, a commitment also evidenced by their $100,000 gift to support scholarships for those whose education is not fully funded by their military benefits. Together, we are a community that believes in supporting those who served. We continue to seek ways to ensure that our student veterans experience a smooth transition from military life to civilian life while furthering themselves through higher education.”

In 2018, Saint Rose hired a second veteran at its Veteran Center to double admissions and recruiting efforts. In Fall 2019, Saint Rose will begin hosting an Army Reserve Officers Training Corps (ROTC) leadership class on its campus so that ROTC students at Saint Rose no longer have to commute to attend it.

“I am a veteran as well as a graduate of Saint Rose, so I can appreciate what that transition period for members of the military means,” said Martin Dinan, director of veteran recruitment and enrollment, who served three combat deployments and in 2013 was promoted to Colonel in the New York Army National Guard. “It’s an honor to be a resource today to veterans, service members, and military family members, whether it’s helping them to navigate their military benefits or connecting them with a service at the VA Hospital located not far from campus.”

To find out more about the educational services Saint Rose provides to veterans and their families, visit www.strose.edu/veterans.