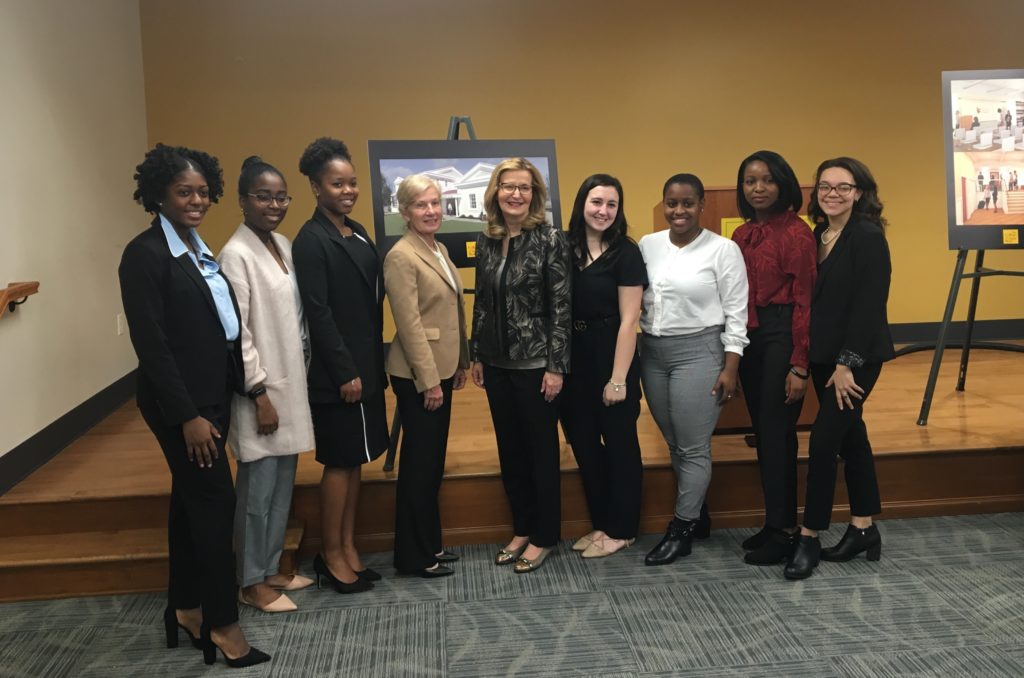 At a time when record numbers of women have been elected to Congress and the #MeToo movement has amplified the experiences of many, Dr. Carolyn J. Stefanco, president of The College of Saint Rose, has made two major announcements about women’s leadership and its role in the College’s future.

At a news conference on February 18, Stefanco announced a $1.2 million gift from community leaders Michelle and Walt Borisenok for a renovation to 1020 Madison Avenue, which will become the Michelle Cuozzo Borisenok ’80 House, home to the new Women’s Leadership Institute at Saint Rose. Stefanco also introduced the inaugural group of BOLD Women’s Leadership Network Scholars, seven students now part of a movement at an exclusive national network of colleges and universities seeking to empower women on their campuses to become change-makers. 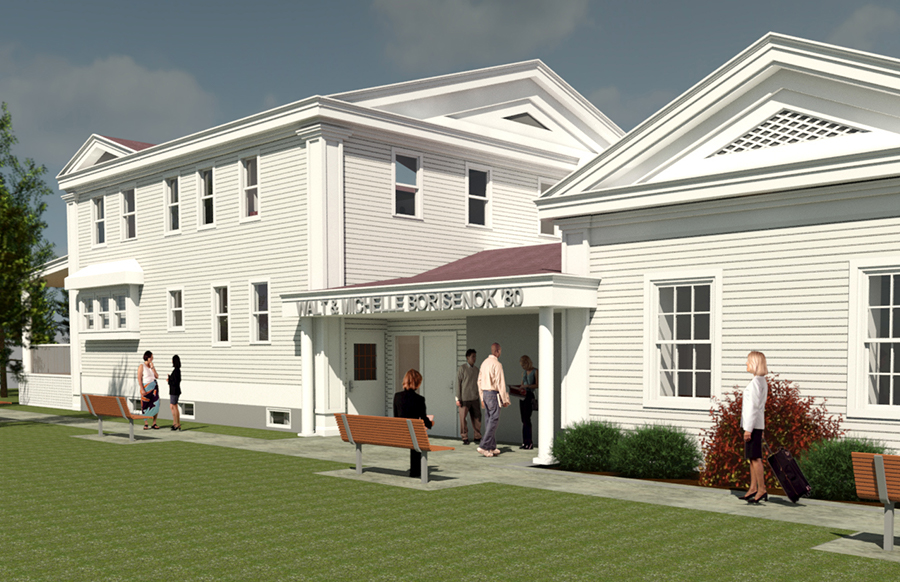 The Women’s Leadership Institute will support the ongoing advancement of women leaders through education, advocacy, and collaboration and will serve as a hub for dialogue and resources. The institute will offer students, alumni, faculty, and staff – and the broader community – distinctive, timely programming to build unity, develop skills, and gain perspective and experience to help women excel in their professions and serve as agents of change. Events will include speakers, retreats, and workshops, among others. An advisory board of global leaders will support development of the institute’s vision, mission, and programming. The Women’s Leadership Institute will offer a full range of programming by 2020, the centennial year for Saint Rose and the centennial of women’s suffrage in the United States.

“The College of Saint Rose was founded in 1920 because the Sisters of St. Joseph of Carondelet believed women deserved equal access to higher education,” Stefanco said. “What started with that first graduating class of women in 1924, has been followed by generations of Saint Rose students who proudly use their Saint Rose degrees to break ground in the arts, business, education, health professions, and the sciences; and to advocate for the underrepresented and for social justice. Since 1969, we have been a fully co-educational institution, and we remain committed to empowering and developing women leaders.”

“Women on our campus join with the students around them, regardless of gender, to continue the work of social transformation,” Stefanco said. “As a scholar of women’s history, and a researcher, speaker, and author on the topic of women’s leadership, I could not be more proud to guide this initiative at Saint Rose. I could not ask for better partners than the Borisenoks, who believe in the power of our students to live out the core values at Saint Rose in a way that will reverberate throughout the nation and the world. On behalf of the next generation of great women leaders at Saint Rose, I express our gratitude to Michelle for her vital role.” 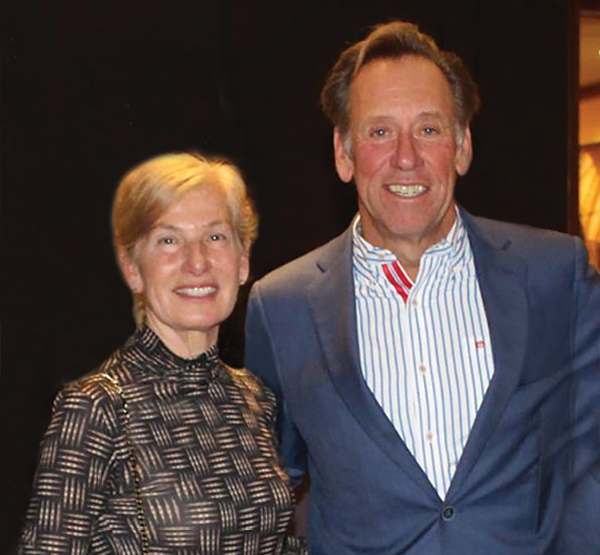 Michelle Cuozzo Borisenok and Walt Borisenok, supporters of the Women’s Leadership Institute through a $1.2 million gift to renovate the building that will house the institute beginning in August 2019.

Michelle Borisenok, a member of the Saint Rose Board of Trustees who graduated from Saint Rose in 1980 with a degree in business administration, is an entrepreneur and philanthropist, known throughout the Capital Region for her steadfast support of women’s leadership. Her love of equestrianism and passion for advocating women’s advancement fueled her latest venture, Brown Road Racing LLC, which brings women together to learn about racing and share in the camaraderie of horse-ownership partnerships.

Michelle is married to Walt Borisenok, who founded Fortitech in 1986. Fortitech developed and manufactured nutritional products for the fortification of food and pharmaceuticals and grew into a global supplier with four business units and seven manufacturing plants worldwide. The company was acquired in 2012 by the Dutch-based life science company DSM.

The Borisenoks lend their time and resources to numerous charitable causes, not only in the Capital Region but also in Florida, where they make their home part of the year.

“My time at Saint Rose had a profound impact on my life. I was a first-generation college student, who transferred to Saint Rose and commuted from my home in Troy,” said Michelle Borisenok. “Simply attending Saint Rose was achieving a dream. Many great women leaders shaped my experiences, and I am excited to help the College celebrate its centennial with such a special endeavor. Students come to Saint Rose from throughout the country and across the globe. I am honored to know that this gift lends power to the dreams these students hold when they arrive at Saint Rose, and that they will graduate ready to transform the lives of those around them.”

Including Saint Rose, the BOLD Women’s Leadership Network currently operates at six colleges and universities: Ithaca College; Middlebury College; Colby-Sawyer College; the University of Connecticut; and Rutgers University–Newark. Each partner institution is led by a woman president who has demonstrated a commitment to diversity and inclusion throughout her career.

Stefanco joined Saint Rose as its 11th president in 2014 after serving as vice president for academic affairs at Agnes Scott College in Atlanta. She holds leadership roles in American higher education organizations, and her academic research focuses on women and leadership. Globally, Stefanco is a trustee of the American University in Bulgaria, and a board member of the International Leadership Association. In the Capital Region, she serves on the boards of Albany Medical Center, Hearst’s Women@Work, and the Center for Economic Growth, where she chairs the workgroup on Interactive Technology. She earned a Ph.D. in history from Duke University, an M.A. in women’s history from Binghamton University, and a B.A. in history and a women’s studies certificate from the University of Colorado at Boulder.

The inaugural class of seven BOLD Scholars, all currently in their junior year at Saint Rose, will live together through their May 2020 graduation, as they develop their leadership skills, work to address issues they have prioritized, receive mentoring from women professionals, and learn from Stefanco’s research and experiences. 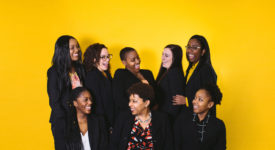 The seven BOLD Scholars at Saint Rose are:

The BOLD Women’s Leadership Network funding provides significant financial aid for the BOLD Scholars, allowing them to focus on their education, leadership development, and career launch. The BOLD Scholars will attend a leadership course spearheaded by Stefanco and be provided with the funding for an international, national, or regional internship or fellowship that aligns with their career goals. They also will attend an International Leadership Association conference with Stefanco; meet routinely as a group to hear from speakers and discuss initiatives; and receive mentorship from women leaders. The second cohort of seven BOLD Scholars will be named this spring.

The focus for the Saint Rose BOLD Scholars is “Inclusive Leadership: Preparing Women for Transformative Lives of Global Impact.”