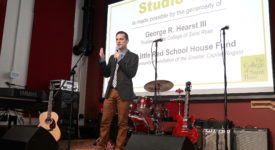 The College of Saint Rose celebrated the opening of Studio G3 – a freshly renovated rehearsal and performance space with cutting-edge sound, lighting, and video capabilities – with student and faculty performances and a ribbon-cutting ceremony on February 7.

The space is located in the Hearst Center for Communications and Interactive Media and was made possible by the leadership and philanthropic support of Saint Rose Trustee George R. Hearst III and The Little Red School House Fund of The Community Foundation of the Greater Capital Region.

“Our music programs draw students from throughout the United States and across the world to hone their talents at Saint Rose,” said Saint Rose President Carolyn J. Stefanco. “We are tremendously grateful for the generosity of the man behind Studio G3, Saint Rose Trustee George R. Hearst III, who previously supported the construction of the building that houses this beautiful performance space and has been a constant friend to Saint Rose. With The Little Red School House Fund of The Community Foundation of the Greater Capital Region also standing behind the project with its gift, our students see that our entire community is behind them as they pursue their dreams and find their voices through their music.” 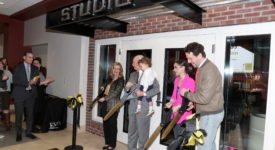 Included in the renovation was: a new steel balcony with a control room, increasing capacity in the venue from an audience of 140 to 238; a new television in the hallway outside the studio to broadcast to overflow crowds; updated and more energy-efficient lighting; and upgraded sound and video equipment. Improved soundproofing means the performance space and recording studio next door can now be used at the same time. And a new acoustic glass door system with sidelights offers an expansive view into the space from the hallway, while a new entryway with a brick façade and a metal canopy give the space a club-like feel.

“We have supported numerous activities and initiatives at the campus,” Hearst said. “This facility (the William Randolph Hearst Center for Communications and Interactive Media) and now Studio G3 … will create new ideas and generate new scholarship – this is what this is all about.” 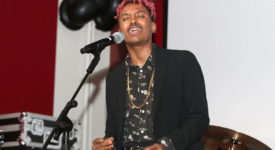 The stage in Studio G3, is now named Jack’s Stage, after Jack Fragomeni, a longtime jazz-guitar adjunct faculty member who passed away suddenly around the time the Hearst Center was renovated and renamed.

While used primarily by music industry students, the space is also open to students in other academic programs, including those pursuing communications and various business degrees, as the venue serves an ideal location for talks and presentations.

The Hearst Center for Communications and Interactive Media, home to Studio G3, is located at 996 Madison Ave., Albany.