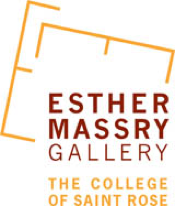 The Esther Massry Gallery at The College of Saint Rose continues its 10th anniversary celebration with the exhibition, “Revised Realities: Isidro Blasco + Elise Engler,” running from January 18 through February 23. (A reception with the artists will be held from 5 to 7 p.m. January 25.) Both artists presented solo shows in the former Picotte Hall gallery more than 10 years ago. Spanish artist and trained architect, Isidro Blasco combines architecture, photography and installation to explore physical and psychological terrains. A native New Yorker, Elise Engler considers her work a form of journalism. She is known for her intricate serial drawings that capture and document the material world in great detail.

Isidro Blasco combines architecture, photography, and installation to explore physical and psychological terrains. Digital images and raw building materials are used to create large- and small-scale architectural environments and three-dimensional reconstructions of neighborhoods, producing snapshots of cityscapes that challenge perceptions. Beginning with a viewpoint of a building, or an interior or exterior space, Blasco takes photographs and pieces together images into “photographic sculptures” that are reminiscent of Cubist collages with multi-faceted angles and planes. Blasco’s slight distortions of perspective produce revised scenes that can appear both recognizable and unfamiliar. The artist explains, “I connect my experience as an outsider who walks the streets and interacts with the city with my more intimate feelings about closed and private spaces.” 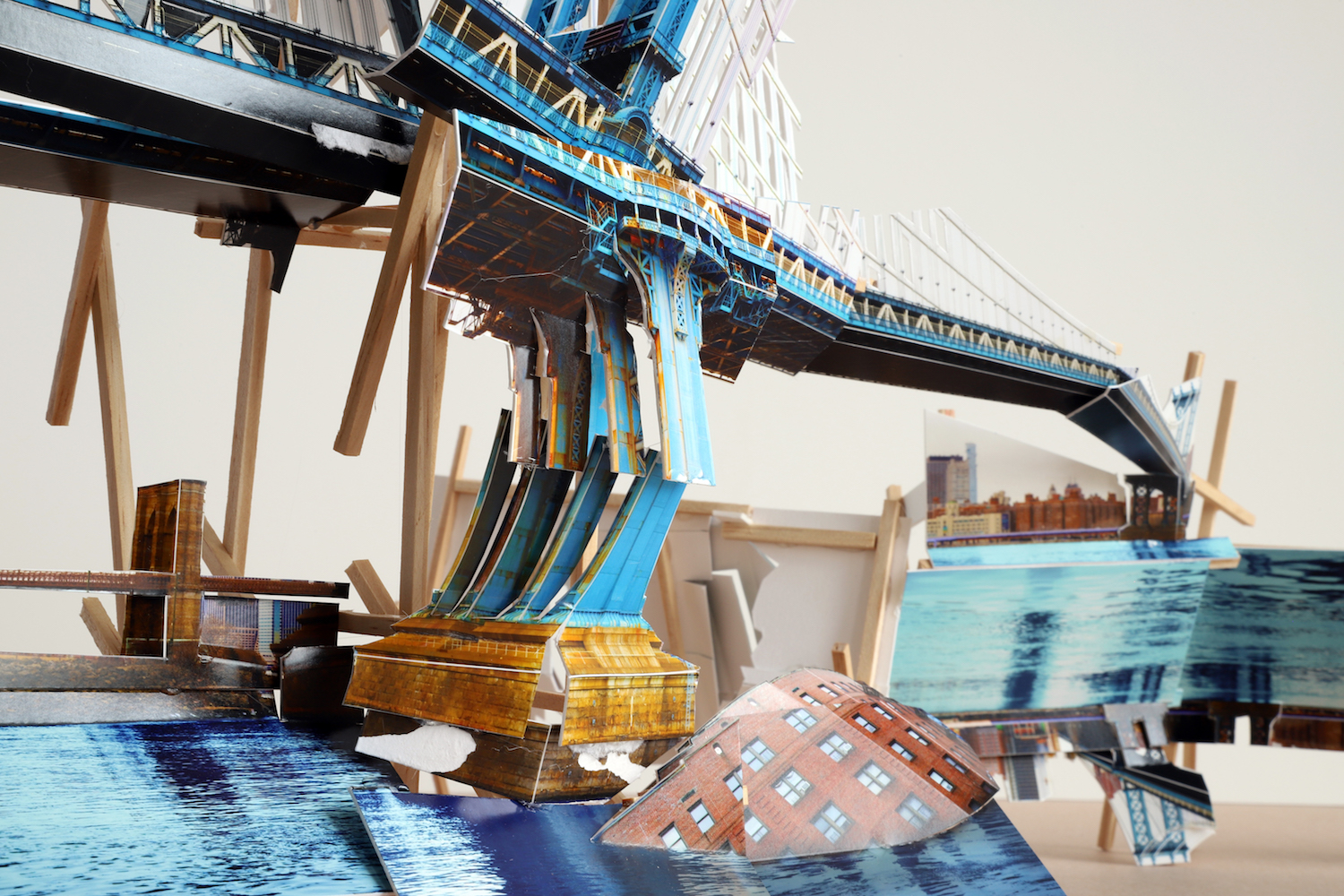 For the exhibition, Blasco has built a large installation of iconic New York City bridges. Titled “Adrift Houses,” this sprawling construction presents an unsettling narrative that reaches beyond its architectonic origins. In reality, bridges are physical structures that allow us to move from one place to another, overcoming geographical barriers. Conceptually, bridges built on consensus can bring opposing sides together.

Blasco’s bridges are fragmented and incomplete. They silently lay witness to the perilous effects of climate change and disjointed political rhetoric. Meanwhile, as water levels advance, homes, towns, and cities will be engulfed, drastically altering our habitat and way of life. In light of this, the artist envisions a New York nightmare where displaced houses are flooded, lifted off foundations, and cast adrift down river. It highlights the transitory nature of safety and security, breaking down memories of ‘home’ into repositories of fractured memories.

Blasco was born in Madrid, Spain and has lived in New York since 1996. The artist has exhibited widely throughout the world including Australia, Brazil, China, Austria, Portugal, and Spain. New York venues include Black and White Gallery, Smack Mellon Gallery in Brooklyn; and Wave Hill in the Bronx. Numerous awards include sculptor in residence at the Spanish Academy in Rome (1991); the Pollock Krasner Foundation Grant (2010, 1998); and the Guggenheim Foundation Fellowship in Visual Arts (2000). In the United States, Blasco’s works can be found in the collections of the Museum of Modern Art; Whitney Museum of American Art; Queens Museum of Art; Tweed Museum of Art; Chicago Institute of Contemporary Art; and Baltimore Museum of Art, among others. The artist maintains studios in Madrid, Spain; Brooklyn; and Hudson, New York. Visit Blasco’s website.

Elise Engler’s meticulous, pictorial drawings and paintings capture and document the material world in all its myriad details. Her projects are large in scope, but intimate in format. Her practice is a narrative investigation of the world seen through its innumerable, but countable, individual components, assembled in suites and series of works. In 2005, Engler held a solo exhibition at Saint Rose’s Picotte Hall. “Your Tax Dollars and Other Drawings” featured hundreds of drawings of public and private collections. These detailed pictorial inventories of things ranged from the personal, every day of all of her possessions to war paraphernalia and depictions of the soldiers who died in the Iraq War.

A Manhattan resident, Engler lives just off Broadway. In 2014, she set her sights on a documentary series working plein air, beyond the privacy of the studio. “A Year on Broadway” records all 252 blocks (13 miles) of this iconic road, which is the oldest north-south main thoroughfare in New York City. The small serial drawings were completed in 365 days. Combined they reach 120 feet in length. The project was the feature story on “CBS Sunday Morning.” 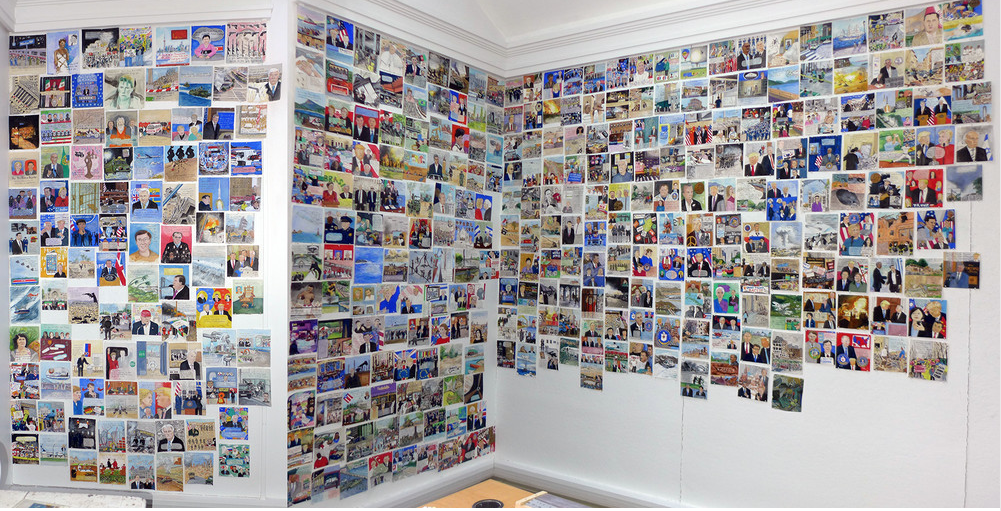 “The First Radio HeadlineS Heard of the Day Drawing Project” is a record of the first news items the artist hears on the radio each day, beginning as far back as November 22, 2015. NPR is the main source augmented by other stations. The headlines have ranged from significant events to the mundane, although the tone has grown darker following the election. The drawings are posted daily on Instagram and Twitter. They are often retweeted by the reporters whose headlines the artist quotes. “HeadlineS” was slated to be completed on December 31, 2016. However, as the news continues to unfold, the artist realized the significance of documenting a monumental trajectory in American history. Soon after the election, the plethora of news presented visual and contextual juxtapositions. The series has expanded to the “First Radio HeadlineS Heard of the Day Drawing Project,” with two or three headlines (and occasionally five or six) and related images depicted.

“A Year on Broadway” and “The First Radio HeadlineS Heard of the Day Drawing Project” will be shown in the exhibition at the Esther Massry Gallery.

“Saint Rose has a strong tradition of nurturing and celebrating great art, and we are proud to welcome back these important artists who have made such an impact on our community,” said Saint Rose President Carolyn J. Stefanco. “We’re especially happy that they are helping us celebrate a milestone in the history of the Esther Massry Gallery and the ongoing generosity of the Massry Family.”

EVENT DETAILS
What: Esther Massry Gallery 10th anniversary and reception for “Revised Realities” exhibition
Who: Artists Isidro Blasco and Elise Engler
Where: Esther Massry Gallery, Massry Center for the Arts at The College of Saint Rose, 1002 Madison Avenue, Albany
When: Reception is January 25 from 5 to 7 p.m. at the Esther Massry Gallery. The exhibit opens January 18 and runs through February 23. Gallery hours: Monday through Saturday from noon to 5 p.m.; closed Sunday. Open until 9 p.m. for 1st Friday, February 1.
Notes: Free and open to the public.