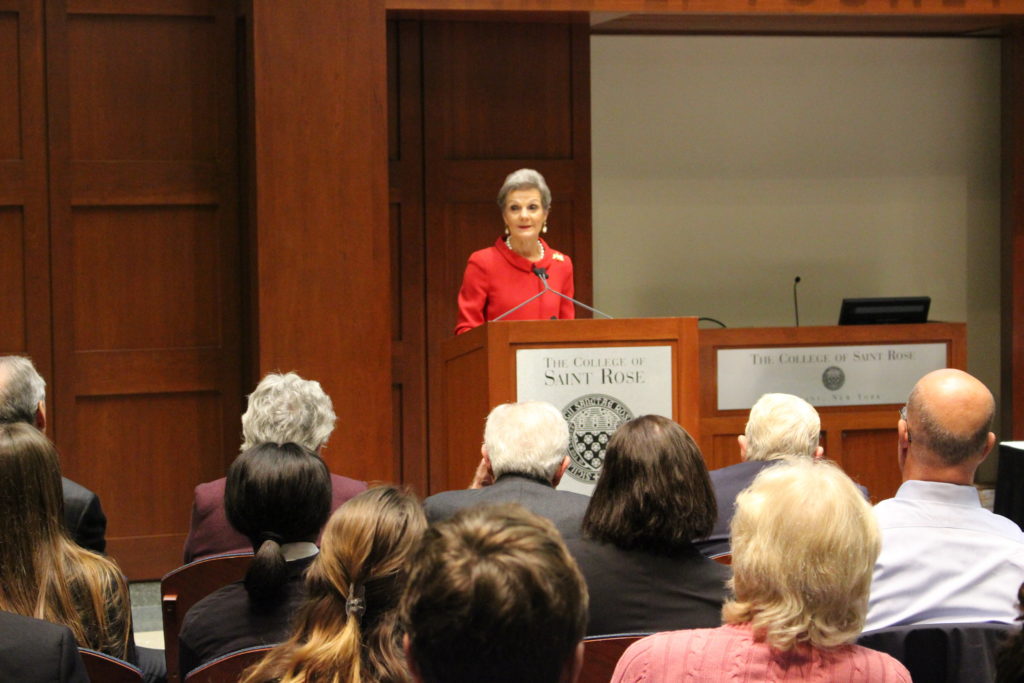 The College of Saint Rose will hold the 2018 Jurist in Residence Lecture “The World of Global Commerce – The Rule of Law and International Trade” at 5:30 p.m. November 8 in the Touhey Forum, Thelma P. Lally School of Education, 1009 Madison Avenue, Albany.

Saint Rose Jurist in Residence Loretta A. Preska, United States District Court Judge and 1970 graduate of Saint Rose, will give the opening address and serve as a panelist.

She will be joined on the panel by two attorneys, who are experts in international commerce: General Counsel Sheila O’Donnell, J.D., LL.M., of Valeo Powertrain Systems in France, and Alexandra R. Harrington, LL.M., D.C.L., adjunct professor at Albany Law School.

O’Donnell has authored several book chapters and articles covering an assortment of legal topics from a global perspective, including trade, arbitration, and intellectual property. She has taught courses and served as a guest speaker for conferences related to international trade and law. Prior to arriving at Valeo, O’Donnell was a partner at Thieffry & Associés, Société d’avocats au Barreau de Paris.

Harrington is serving as the 2018-2019 Fulbright Canada Research Chair in Global Governance at the Balsillie School of International Affairs in Waterloo, Canada. Her most recent publication is “International Organizations and the Law.” She currently serves as director of studies at the International Law Association of Colombia in Bogota, Colombia, and lead counsel of the Cross-cutting Program on Peace, Justice and Governance at the Centre for International Sustainable Development Law in Montreal, Canada.

Also serving on the panel will be Hugh Johnson, founder, chairman, chief investment officer, and partner at Hugh Johnson Wealth Advisors. Johnson’s work on the U.S. economy and financial markets guides the firm’s investment strategy. He joined First Albany Corporation in 1978 after serving as executive vice president of Hugh Johnson & Company, Inc. Hugh has more than 40 years of investment experience, and is an often-quoted expert on finance.

“Global Connectedness is part of the Strategic Plan at Saint Rose, and so, we are pleased to host this event, which looks at law and trade from an international perspective,” Stefanco said. “As always, we also look forward to having Judge Preska on campus, as she has long served as an advisor and as an inspiration to our students. This will be a particularly special day for our campus because prior to the lecture, we will have the opportunity to dedicate a new mock trial courtroom, the creation of which was made possible in large part due to Judge Preska’s generosity.”

Earlier in the afternoon on November 8, the College will celebrate the ribbon-cutting for the Honorable Loretta A. Preska ’70 Mock Trial Courtroom. Located in Albertus Hall, Room 103, the mock courtroom will enable Saint Rose and the Hon. Loretta A. Preska ’70 Mock Trial Team to host competitions on campus. The intercollegiate team helps students build the confidence and skills they need to be successful in competition, and prepares them for graduation, the rigors of law school, and beyond.

Preska, who mentors the team, is the inaugural Jurist in Residence.  The Jurist in Residence program is now in its sixth year. An endowment in Preska’s name, created when her former clerks wanted to honor her 20-year anniversary as a federal judge, provides funding for the intercollegiate mock trial team and the jurist program.

The Jurist in Residence Lecture at 5:30 p.m. is free and open to the public and will be held in the Carl E. Touhey Forum, Thelma P. Lally School of Education, 1009 Madison Avenue, Albany. Parking will be available in the Events and Athletic Center lot off of Western Avenue or behind the Massry Center for the Performing Arts, located off Madison Avenue.

Register online or by emailing specialevents@strose.edu.