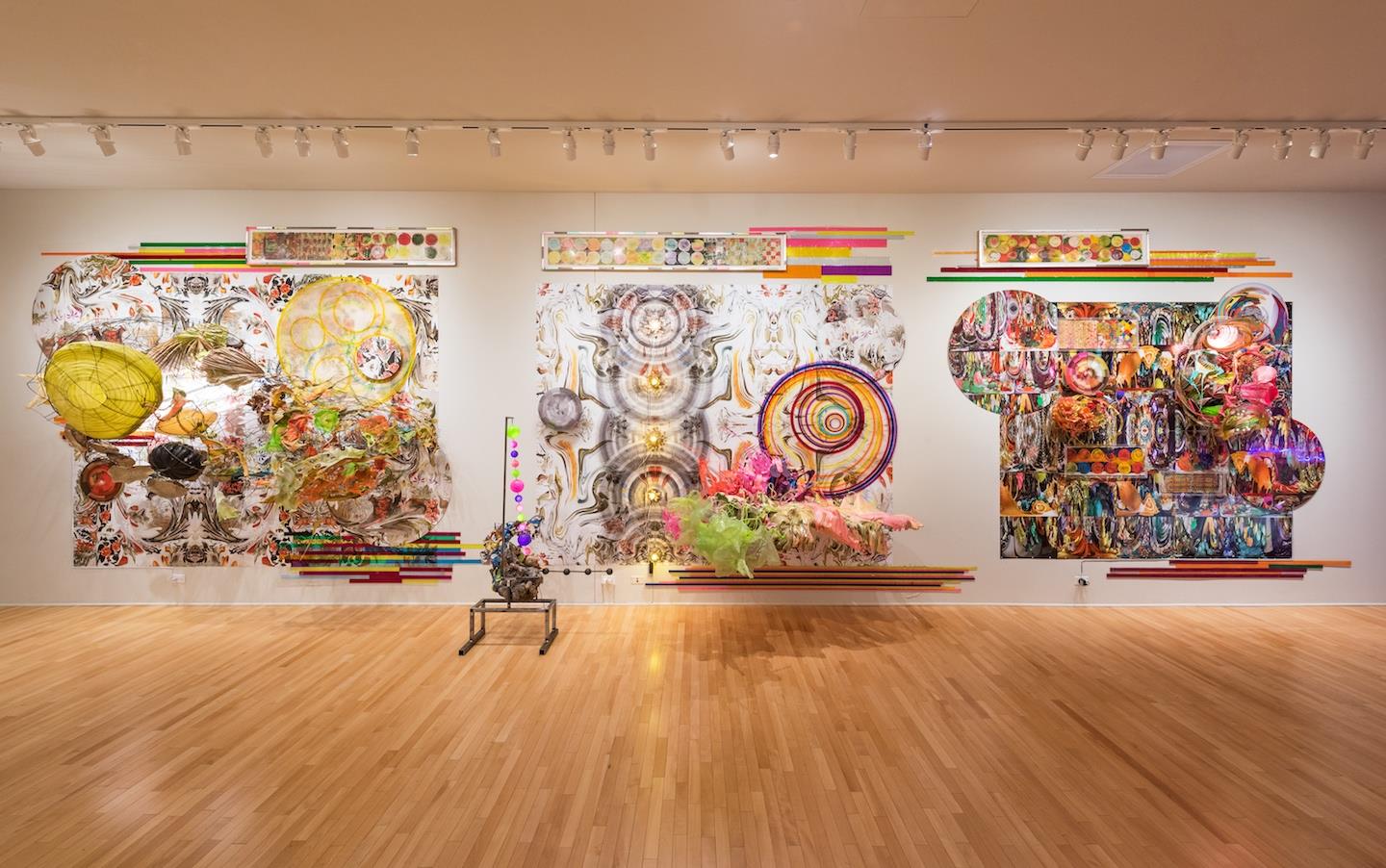 “These are three artists who have made an indelible, dramatic impression on our community and students,” said gallery director Jeanne Flanagan, who curated the show that runs October 5 through December 8. A 16-page exhibition catalogue will be available for purchase. It will feature essays by New York writers and curators, Jan Garden Castro and Howard Hurst. 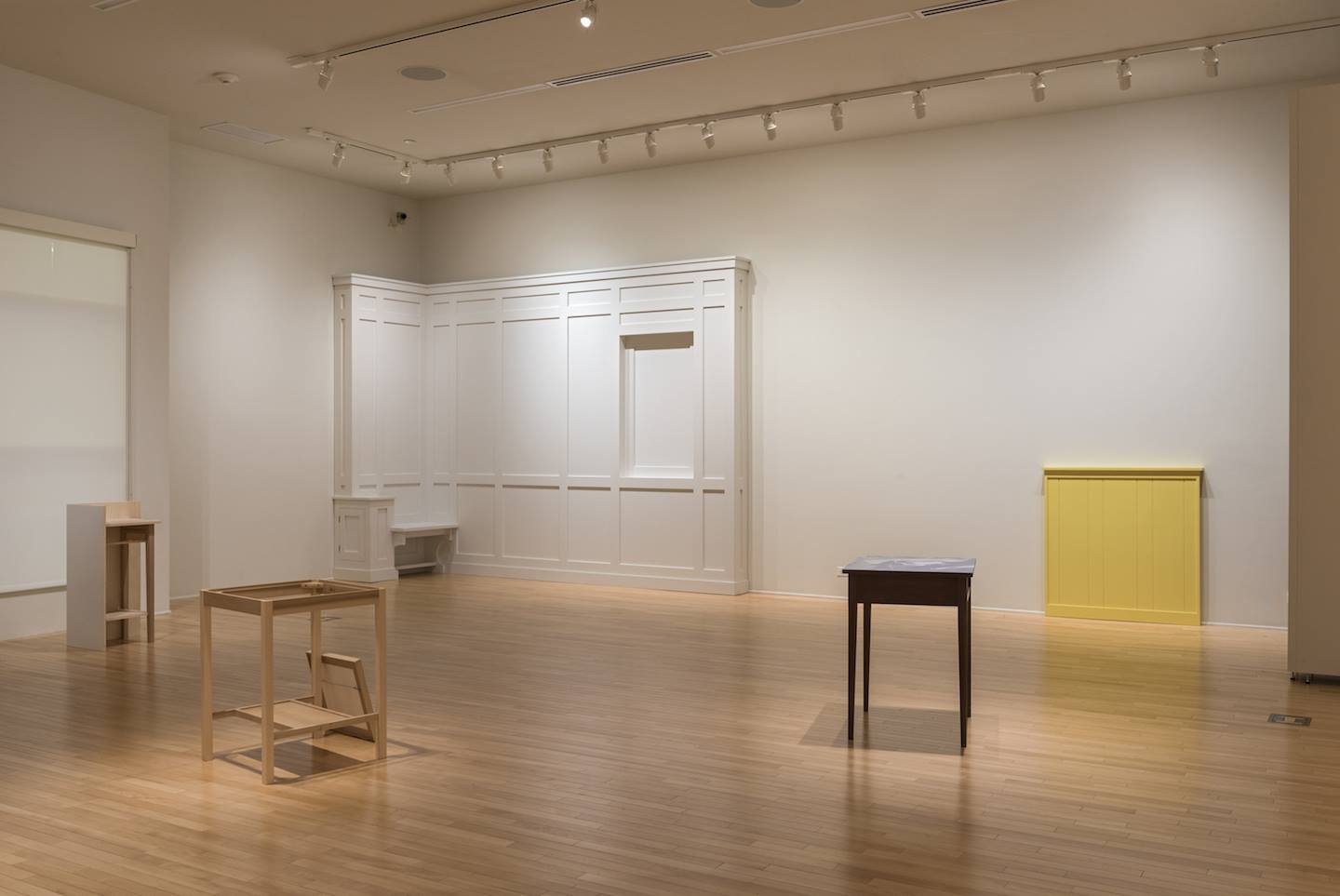 Francis Cape
The development of Francis Cape’s sculpture stems from his early training as a woodcarver and carpenter. Based on English Victorian vernacular woodworking, Cape’s cabinets are like familiar objects. The refer to doors, shutters, closets. The artist cites his personal experience growing up in nearly identical English Victorian row houses, their paneled interiors and clean, geometric exteriors, as having been a major influence on his esthetic. American forms, such as the unadorned simplicity of Shaker furniture and the elegant practicality of Federal-period design, also inform his sculpture. More recently, his work has taken on subtle social commentary.

Cape is referred to as a “kind of craft-oriented Minimalist” by New York Times art critic Roberta Smith, who describes his work as “hovering between furniture and architecture, painting and sculpture, and at least two centuries …” Yet, Cape’s sculptures are not fully understood in the context of Minimalism. Rather than imposing a fixed reading of the work, he intentionally creates a psychological space which can be occupied by the viewer. For more, visit his website. 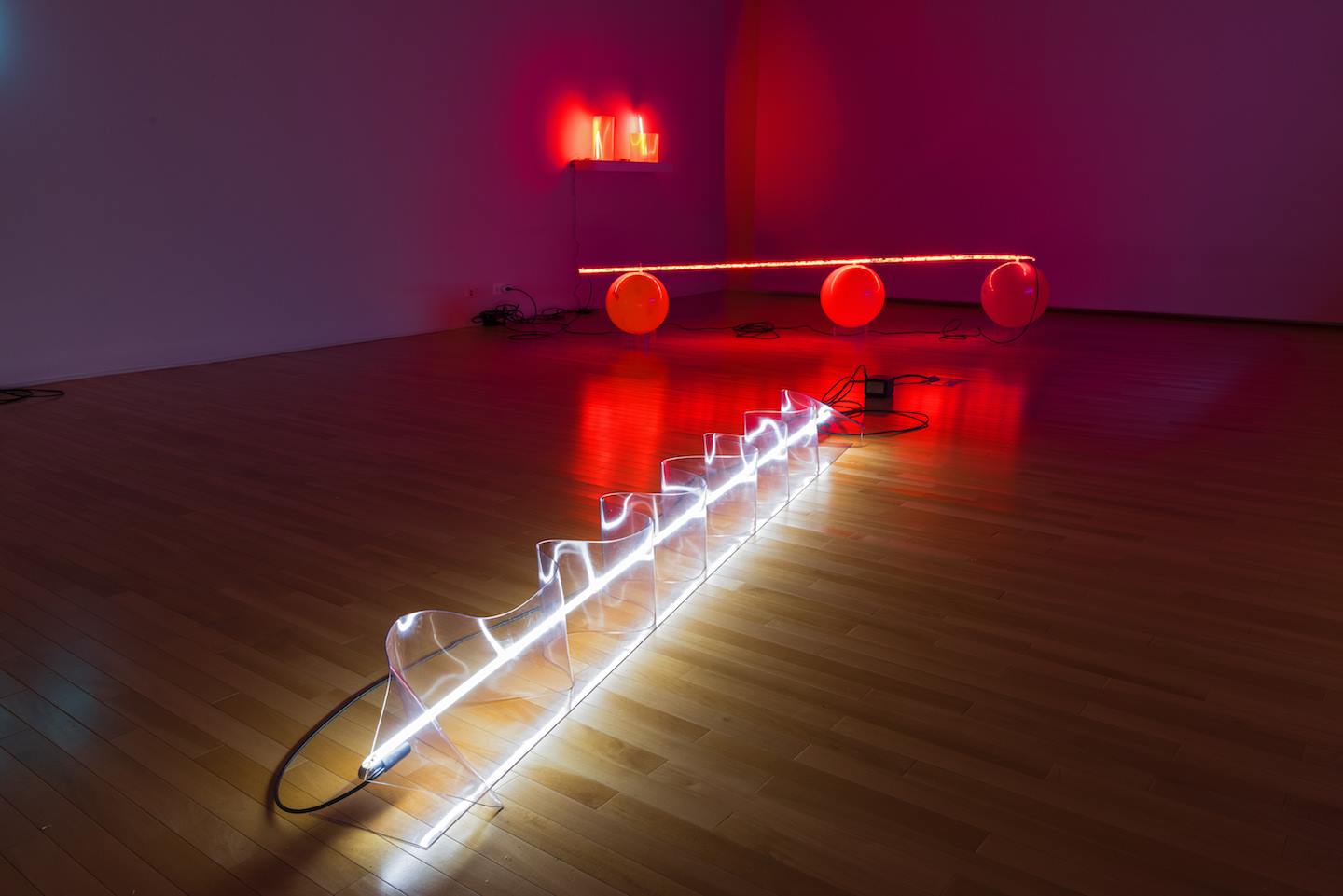 James Clark
For more than 30 years, James Clark has been making sculptural objects and installations from recycled industrial parts and quirky materials like balloons, neon, car parts, live chickens, bubble and fog machines, water, helium, and electroluminescent wire. The completed compositions can often suggest hybrids or cross combinations between machine parts and organic forms. His work is an exploration of conscious experience and stretches beyond objecthood. Clark’s work has been considered expressionistic, as in the work of Mark Tobey or early Barnett Newman. Its temporality emphasizes the spirituality of change and the beauty of conscious experience.

In the exhibition catalogue essay, New York-based writer Howard Hurst explains his reactions to the sculptures. “They demand sustained looking and, if they choose to, can reveal profound moments stashed away in unlikely corners. This is the imaginative realm in which James works, a zone in which one brushes up against forces that evade verbal or literary description.”

Judy Pfaff
Cited by critics as the pioneer of installation art, this oft-cited label for the sprawling career of Judy Pfaff provides an introductory sense of Pfaff’s legacy, but proves limiting to the ever-changing work she has been making for decades and still today. Her work spans across disciplines from painting to printmaking to sculpture to installation but is perhaps best described as painting in space. These spatial paintings inhabit and transform their environments, becoming ad hoc homes for viewers and the artist. Drawing upon a wealth of spiritual, botanical, and art historical imagery, Pfaff’s installations simultaneously and without contradiction reference the austerity of a cathedral and the temporality of a mandala.

Like a mandala, the life of Pfaff’s work is brief and burning, deconstructed and with sections discarded after a show comes down. Each installation considers the specific spatial geometries of the room, the ceiling, the street out the window, so that no two shows are ever alike. This tenacious generosity Pfaff offers her viewers, in which she and her crew labor for months or years for shows that last days or weeks, sets Pfaff apart from colleagues in other disciplines, who can rely on sales of discrete objects. Refusing to give narrative meaning to her work, this urgent and ferocious need to labor for the visual and tactile is remarkable in an era where language dominates artistic activity.

“Saint Rose has a strong tradition of nurturing and celebrating great art, and we are proud to welcome back these important artists who have made such an impact on our community,” said President Carolyn J. Stefanco. “We’re especially happy that they are helping us celebrate a milestone in the history of the Esther Massry Gallery and the ongoing generosity of the Massry family.”

The show opens on October 5 and runs through December 8; all three artists will be at the reception on November 2 from 6 to 8 p.m.

What: Esther Massry Gallery 10th Anniversary and Special Exhibit Reception for “Sculptors ReCollected”
Who: Sculptors Francis Cape, James Clark, and Judy Pfaff
Where: Esther Massry Gallery, Massry Center for the Arts, 1002 Madison Avenue, Albany
When: Reception is November 2 from 6 to 8 p.m. The exhibit opens October 5 and runs through December 8. It is free and open to the public.
Gallery hours: Monday through Saturday noon to 5 p.m., with hours until 8 p.m. Wednesday and Thursday; closed Sunday. Closed Thanksgiving (November 21 through 25). Open 1st Fridays, November 2 and December 7, from 5 to 9 p.m.