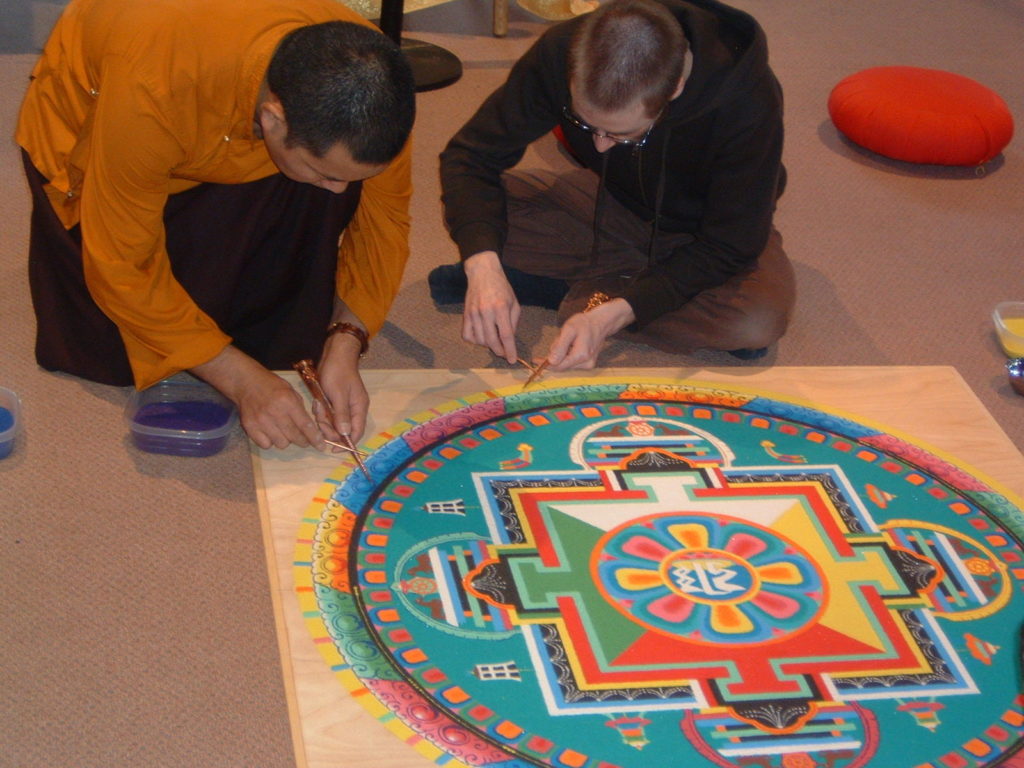 Lama Karma Chopal makes a mandala in 2010 at Saint Rose.

Revered Tibetan Buddhist Lama Karma Chopal will be at The College of Saint Rose on October 22 through 26 to construct a mandala – a sacred sand painting. The Hubbard Interfaith Sanctuary at Saint Rose will commemorate this rare occasion with a week of events celebrating Eastern traditions and culture, including an introduction to Buddhism, a lecture on art, and a performance of cello music.

A historical Buddhist tradition, a mandala, which means “circle” in Sanskrit, is a cosmic map of the universe meant to guide individuals to enlightenment. In recent times, monks have begun creating mandalas at community centers to bless the community. Lama Karma Chopal last performed the service at Saint Rose in 2010.

Making the mandala involves dozens of hours of carefully placing multicolored sand in an intricate, bright pattern on a horizontal surface. The result is a breathtaking work of art. The mandala is then swept up and poured into a flowing body of water, embodying the central Buddhist theme of impermanence and symbolizing the transitory nature of life expressed in many faiths.

Fewer than 100 artists worldwide are qualified to create true mandalas, according to the Venerable Losang Samten, who made the first public sand mandala in the West. Lama Karma Chopal, a Tibetan national who became a monk at age 11, studied Buddhist art with renowned artist Sonam Nyima for a decade, and completed his monastic training in India and Nepal. He came to the United States in 2001. 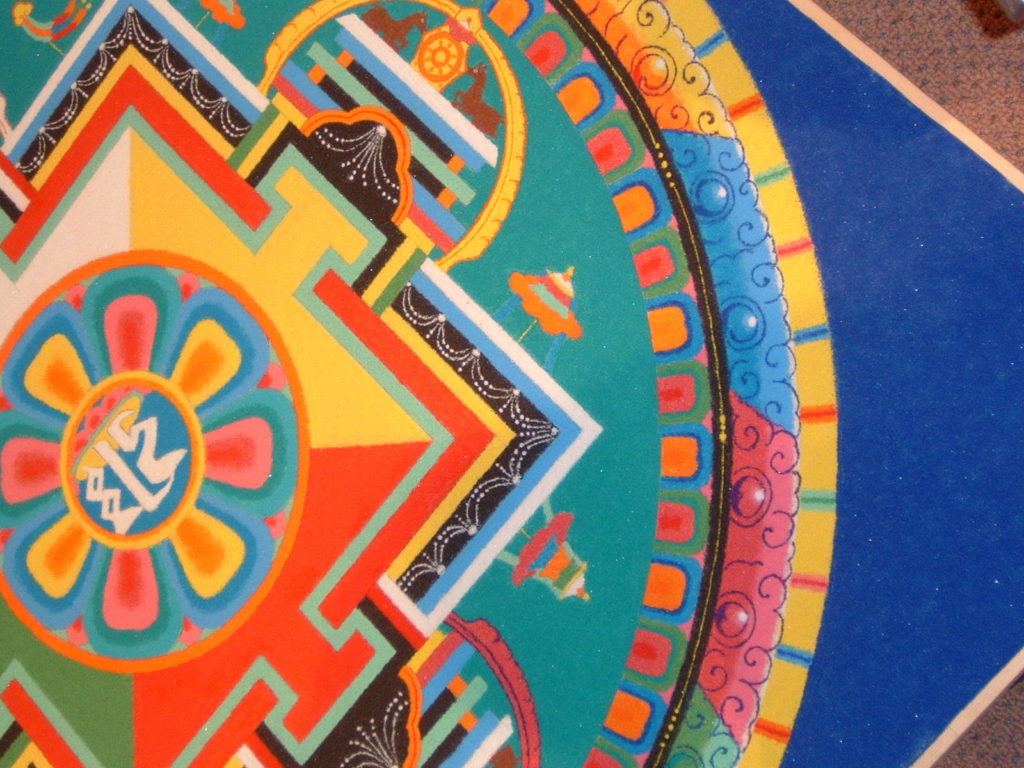 “These days, as we deal with an onslaught of demands and distractions from work and school, in the midst of global unrest and ongoing conflict, the mandala offers a way to disconnect from worldly cares and come together as a community,” says Joan Horgan, director of campus ministry at Saint Rose. “By being in the presence of someone’s deep devotion to creating a more peaceful world, some of that intention can transfer to those in attendance and cause us to act more carefully with ourselves, with those around us, and with our planet.”

Everyone is invited to observe the making of the mandala and attend the week’s special events at the Hubbard Interfaith Sanctuary, beginning with the opening ceremony at 9 a.m. October 22. The lama can be watched creating the piece during the hours of 9 to 11:30 a.m. and 2 to 5 p.m. daily. Other events include: Dr. Michael Brannigan, “Buddhism for Beginners;” professor and cellist David Bebe, selections from J.S. Bach’s suites to accompany the mandala; local artist and instructor Jeff Wigman, introduction to dharma art; Hudson Valley devotional artist Lee Mirabai Harrington, Buddhist mantra kirtan call-and-response chant; Mindfulness Meditation; and an evening of creating your own mandala with the Student Art League.

What: Creating a sand mandala for the community
Who: Lama Karma Chopal, Saint Rose faculty, artists from the Capital Region
Where: Hubbard Interfaith Sanctuary, 959 Madison Avenue, Albany
When: October 22 through 26, 2018
Ticket information: Free and open to the public.