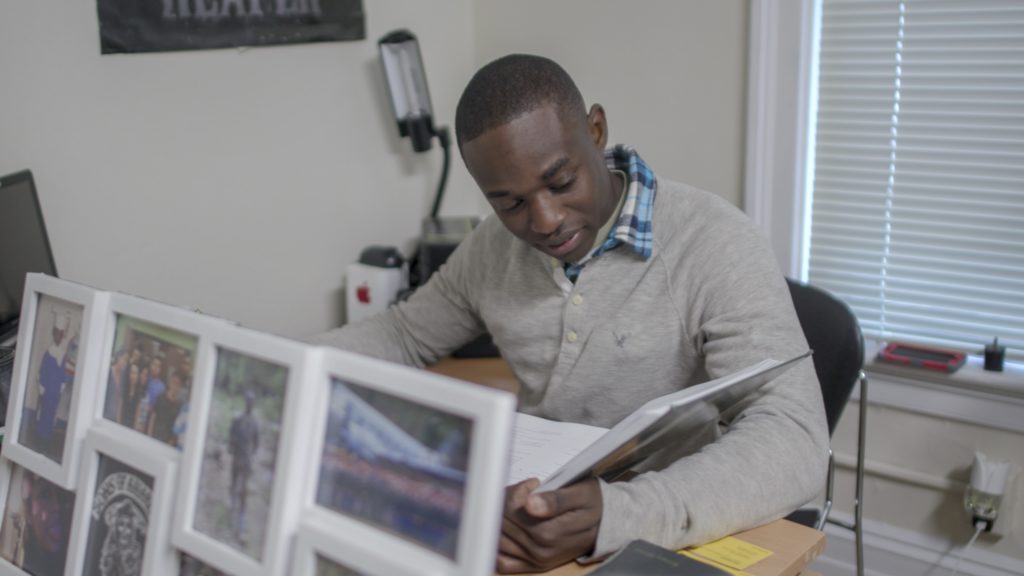 Among the students living in the Veteran Residence is Jevon Schmitz, a 26-year-old, first-year student in the Huether School of Business, who served eight years in the U.S. Army as an airborne infantryman. He deployed to Afghanistan in 2012 and 2014.

The College of Saint Rose, with a long track record of being named best among colleges in serving veterans, will dedicate its new residence hall specifically for student veterans on October 18 with a ribbon-cutting ceremony.

The renovation of the residence hall, now known as the Veteran Residence, was possible thanks to the generosity of the Massry Family, which includes Saint Rose Board of Trustees Vice Chair I. Norman Massry and Trustee Julie Massry Knox G’04, and the support of Tri City Rentals. Last year, the Massry Family also gave Saint Rose a $100,000 gift to support scholarships for veterans whose education at Saint Rose was not fully funded by their military benefits. Additional donors later matched their gift.

The Veteran Residence, a Victorian-style house at 971 Madison Avenue, has six large bedrooms and 2 ½ bathrooms, as well as a shared kitchen, living room, and laundry facilities.

“It is important to my family to support those who have proudly served our country as they transition from military life to student life,” said I. Norman Massry. “We felt the Veteran Residence at Saint Rose was a great way to help aid that transition and encourage student veterans in their pursuit of higher education.”

The house is for both men and women, and, unlike other residence halls at Saint Rose, there is no resident assistant (RA). Veteran students also are able to live in the house all 12 months of the year, rather than having to leave for the summer.

“When we dedicated the Veteran Center in November 2015, it became a hub where our student veterans and students who are military family members gather, study, and feel part of a special community within the larger Saint Rose campus,” said Saint Rose President Carolyn J. Stefanco. “We want to continue to build upon our efforts to value the unique experiences military-influenced students bring to Saint Rose by providing additional spaces that meet their needs.”

Martin Dinan, director of veteran enrollment for Saint Rose and a veteran himself, said the residential option helps to ease the transition from military to civilian life.

“A lot of our veterans are coming right off of active service. It’s hard to transition,” he said. “Something that’s veteran specific helps them because they’re already used to working and living among each other.”

Among the house’s residents is Jevon Schmitz, a 26-year-old, first-year student in the Huether School of Business, who served eight years in the U.S. Army as an airborne infantryman. He deployed to Afghanistan in 2012 and 2014. Schmitz is currently in ROTC and plans to return to the military after graduating from Saint Rose. His goal is to be commissioned into the military intelligence field.

“(Choosing to live in the house) came down to my age and the new mentality I picked up when I was in the military,” Schmitz said. “I wasn’t fully adjusted – even though the Army gives you two weeks of adjustment training. I didn’t want to risk going into an environment with 17- and 18-year-olds and losing myself, if that makes sense.”

For the ninth consecutive year, Saint Rose has been named a Military Friendly® School by Victory Media, publisher of “GI Jobs” and other publications for military personnel. The College also has been ranked No. 1 among “Gold Standard” private colleges with fewer than 10,000 students for the third year in a row.

The dedication event will begin with a formal program in a tent on the campus green behind the Veteran Residence at 5:30 p.m. on October 18 and continue with the ribbon-cutting ceremony on the steps of the building, followed by tours of the space and a reception inside the Saint Rose Veteran Center, located next to the Veteran Residence.