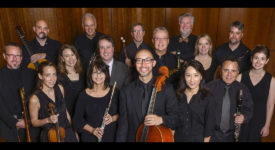 The Saint Rose Camerata opens its 2018-2019 season with the music of Leonard Bernstein (1918-1990). A beloved and influential conductor, composer, and musician who shaped the way we hear music, Bernstein led the world’s greatest orchestras for nearly half a century and penned compositions for Broadway, Hollywood, and the concert hall. To commemorate his 100th birthday, the faculty musicians of Saint Rose have developed a program of vocal and instrumental selections that celebrate Bernstein’s life and work.

The program features selections from Bernstein’s most famous work, “West Side Story” (1957), including a suite for violin and piano (arr. Raimundo Penaforte) that combines popular strains from one of the best-loved musical soundtracks of all time with virtuosic fireworks from both performers. Also included from “West Side Story” is a four-singer rendition of “Tonight.”

The song cycle “Arias and Barcarolles” (1988) for two singers and piano-four-hands, one of Bernstein’s most personal works, offers a glimpse into the composer’s thoughts about love, marriage, music, and family. “I Hate Music!” (1943) for soprano and piano includes narratives about the origin of babies, celestial bodies, classical music, and the relationships between children and adults.

Also featured are songs from Bernstein’s 1956 comic operetta “Candide.” Although the work was a box-office bomb in its Broadway premiere, it has since gained enormous popularity. After Bernstein’s death in 1990, the New York Philharmonic paid tribute to its Conductor Laureate by performing the overture to “Candide” without a conductor.

EVENT DETAILS
The Saint Rose Camerata
When: 7:30 p.m. September 22, 2018
Where: Massry Center for the Arts, The College of Saint Rose, 1002 Madison, Avenue, Albany
Cost: Free and open to the public