The College of Saint Rose’s 95th annual Commencement Ceremony kicked off on Saturday, May 12, at Times Union Center in downtown Albany. Students eagerly lined-up inside the arena, sneaking a quick selfie with friends or FaceTiming with long-distance family members, before marching toward their seats and, later, their futures.

“I’ve been counting down for a couple of weeks now, but it didn’t feel real until this morning,” said Rhina Allende, who received her B.S. in Social Studies: Adolescent Education.

Allende will be leaving for Memphis, Tennessee, in three weeks, where she will participate in a Teach for America program. She said her experience at Saint Rose helped prepare her for her upcoming journey. 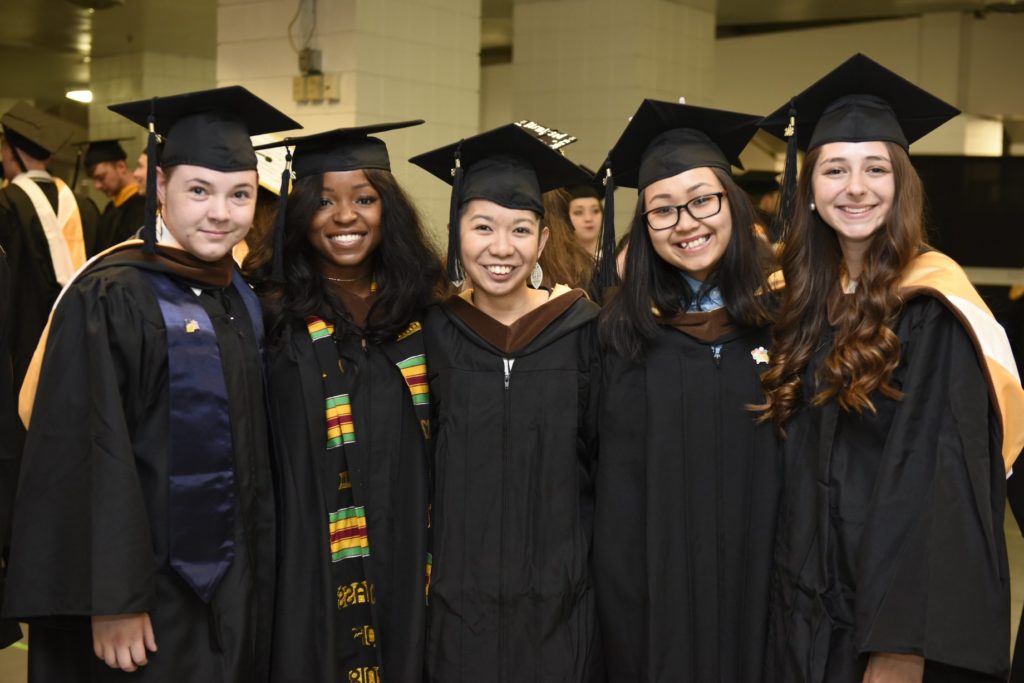 Students pose for a picture at the Times Union Center.

“I was able to build relationships with my professors,” she said. “I got to do two internships, which helped me build up my resume and allowed me to do this program.”

“Only 7 percent of the world’s population has a college degree, and you are now part of this small percentage.”— The College of Saint Rose President Carolyn J. Stefanco, Ph.D.

Before the ceremony began, Tay “Firefly” Fisher, a Harlem Globetrotter and go-getting graduate student, stood on the floor of the Times Union Center and posed for pictures with his mother.

His mom did not get to see him walk at his last graduation ceremony, because she was having problems with her legs and, since then, had them amputated. He said seeing him walk at the Saint Rose Commencement ceremony was the greatest Mother’s Day gift he could think to give her.

“I feel awesome. Everybody knows about my accomplishments on the field playing basketball. But it’s more than just basketball. I’m more than a basketball player,” said Fisher, who earned his M.S.Ed in Childhood Education. “My academic achievements have stated that. And I’m just trying to do this not just for myself and my family but for the children as well.” 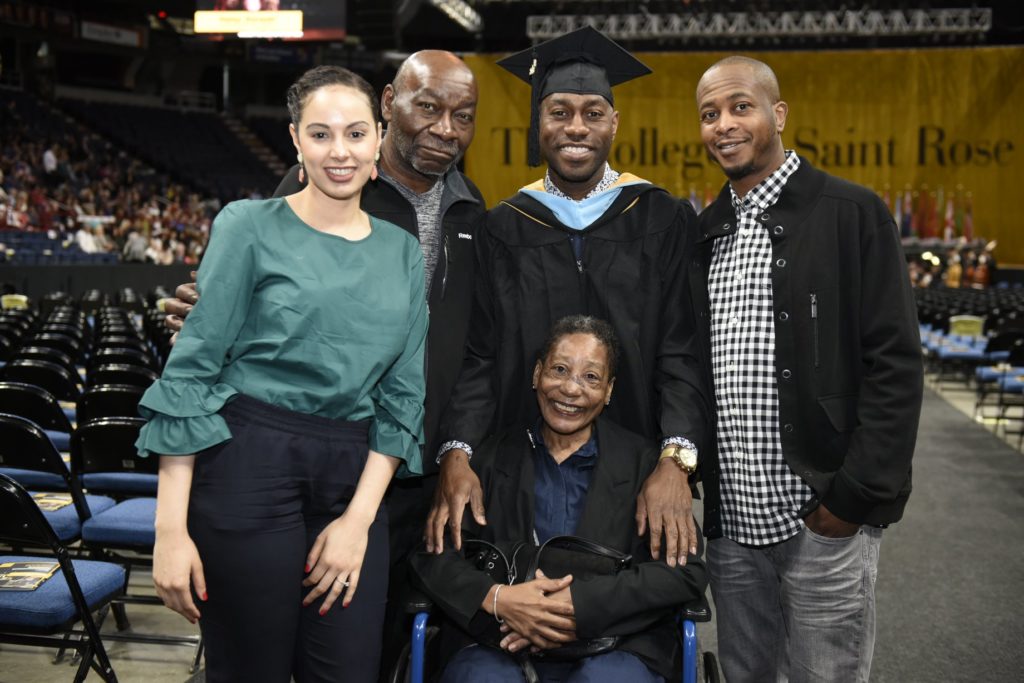 Tay Fisher with his family.

The Class of 2018 was greeted with an inspirational speech from College President Carolyn J. Stefanco, Ph.D., who implored them to use their Saint Rose education to make a difference in the world, to take action, to right a wrong, to join a nonprofit, or donate to a cause that they believe in.

“Do not assume that someone else will do this work, and that your voice and vote do not matter,” Stefanco said. “Our country and our world face such critical issues, and we need you to be active and responsible citizens.”

She congratulated the class on their accomplishments, and reminded them it is a special achievement to receive a degree.

“Only 7 percent of the world’s population has a college degree, and you are now part of this small percentage,” Stefanco said.

She gave a special acknowledgement to first-generation students, who might have lacked support from their family members or friends throughout their academic careers. Stefanco, who was also a first-generation college student, noted that some of these students might not even have anyone at Commencement to witness this huge milestone in their lives, and that she was once in their shoes.

“For all first-generation students, we applaud your strength and commitment, and the energy and focus that enabled you to achieve this amazing milestone,” Stefanco said. 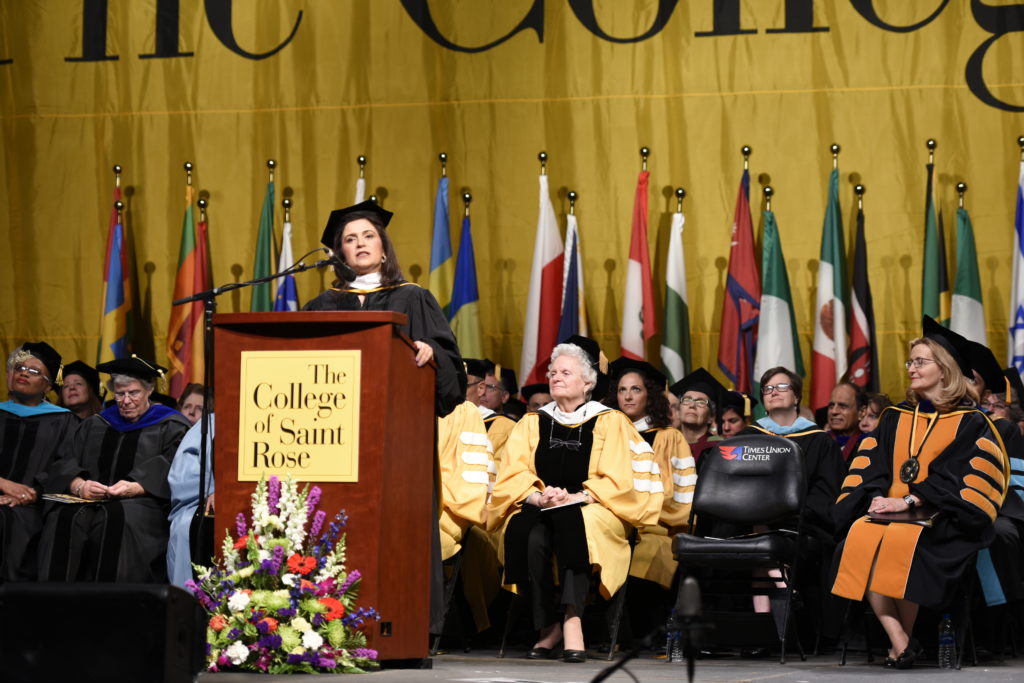 Commencement speaker and award-winning journalist Parisa Khosravi commanded the arena with a thoughtful speech about persistence, perceptions, and compassion.

She spoke about the revolutions she witnessed as a journalist and how to adapt to unforeseen challenges during life’s journey.

She spoke passionately about her teenage son, who is on the autism spectrum and is non-speaking. He now spells to communicate, expressing profound thoughts and emotions letter by letter on an alphabet board.

“We never know what is inside someone until we give them a chance.  Perception is not reality,” she said.

Khosravi was also awarded the honorary degree of Doctor of Humane Letters, honoris causa, with all its rights and privileges. 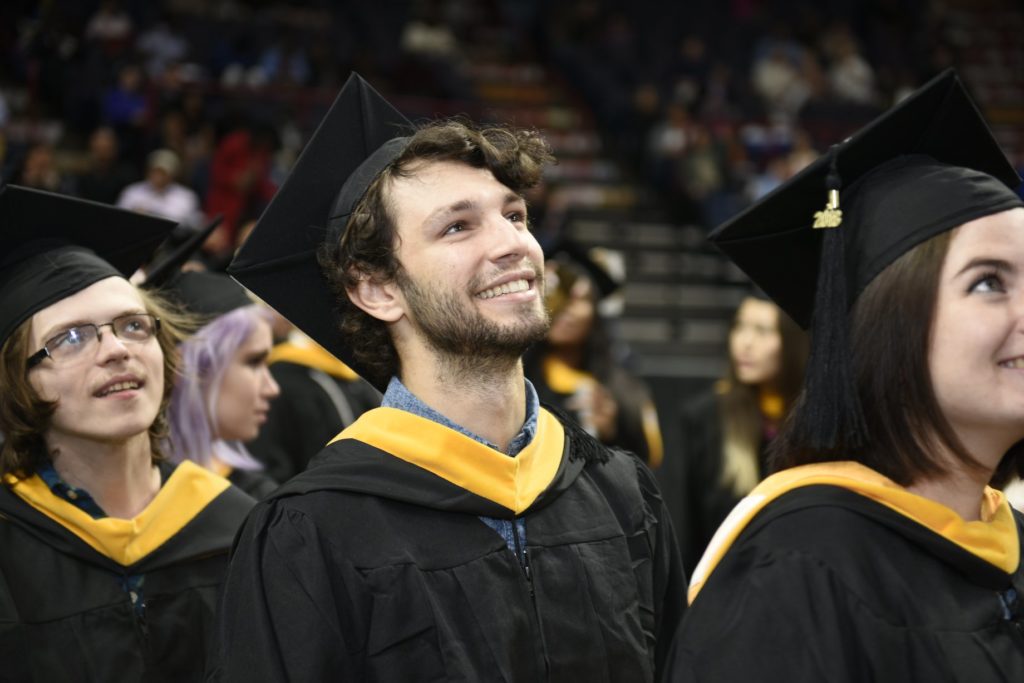 A total of 1,476 degrees were awarded to a diverse group of students from 14 states and 20 countries.

After the ceremony adjourned, students and their families, along with faculty, staff, and administration, poured out into the Times Union Center Atrium and onto the streets of downtown Albany.

“I was looking forward to the day and seeing my family and being surrounded by everyone that I love and who has been there for me throughout all my accomplishments, and I’m glad they were able to be here today,” said Meganmarie Morea, who graduated from the Criminal Justice, Behavior, and Law program. “I feel great. It’s nice to finally to have it all done. I’m going to law school: Pace (University School of) Law.”

Also among the students was Simone Murray, who wore a decorative cap with a pink ribbon that said, “Survivor.”

When Murray, who has taught for 11 years in New York City, enrolled in the School District Leader and School Building Leader programs, she was diagnosed with breast cancer. She took some time off from her education to focus on getting healthy again, which included a double mastectomy, chemotherapy, and radiation.

Her dream of helping to improve education and the lives of students helped push her through her illness and motivated her to receive her advanced certificates.

“I knew I wanted to make a bigger impact in children’s lives, so I knew I needed my advanced certificate to become a district leader or principal,“ she said. “I feel amazing.” 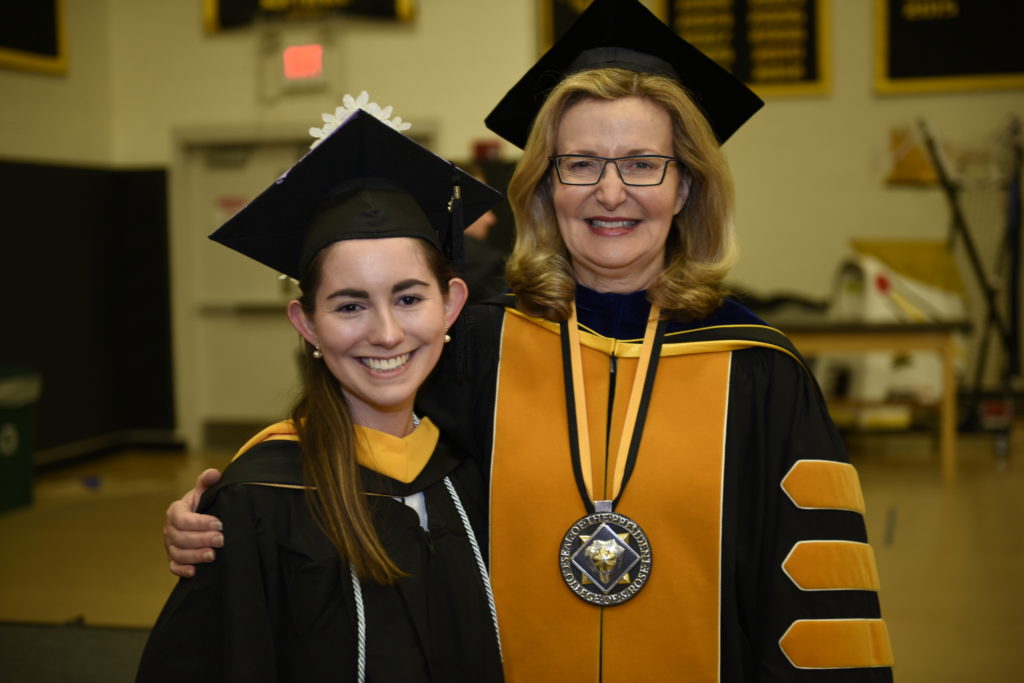