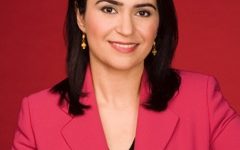 Parisa Khosravi, an award-winning international journalist, will be the featured speaker at The College of Saint Rose 95th commencement ceremony on May 12 at the Times Union Center.

In addition to her professional pursuits, Khosravi is the proud mother of a son who has autism. She devotes much of her time and energy to addressing issues surrounding youth with autism and has been particularly focused on finding alternative ways for those on the spectrum to communicate and interact with the world. Her powerful TEDx Talk on the subject of “silent champions” can be found here. Her son will accompany her to Saint Rose for the commencement ceremony.

“I have known Parisa since we both were selected to participate in the year-long Leadership Atlanta program,” said Saint Rose President Carolyn J. Stefanco. “She is an inspiring woman leader, and global citizen, and someone I am truly proud to call a friend.”

Khosravi, whose family immigrated with her to the United States from Iran in 1979, visited Saint Rose in 2015 to speak at the ribbon-cutting ceremony for the Center for International Programs. In addition to the ceremony, she talked with communications students about journalism during her visit. Today, she is a member of the International Programs Leadership Council, a group of friends and alumni of Saint Rose who help guide the institution on its path to global connectedness, one of the goals in the College’s strategic plan.

“There is no better example of someone who sees the world through a global lens and believes in being a champion for the voiceless, as a journalist, citizen advocate, and mother,” Stefanco said. “I have no doubt that her words will inspire us and the students at commencement, the day that is truly the heart and centerpiece of all that we do as an institution of higher education.”

The commencement ceremony will begin at 10 a.m. at the Times Union Center, 51 S. Pearl St., Albany.