Milhaud (1892-1974), a famed and prolific French composer known for his jazz-inspired works, traveled to Harlem in 1922 to listen to jazz in the clubs and learn from the city’s jazz musicians. He was captivated by the experience, and his music immediately showed the influence of his trip. One year later, he put the finishing touches on “La Création du Monde” (1923), a multi-part ballet score for chamber orchestra. Marked by bluesy riffs, driving syncopated patterns, and swinging rhythms, the piece is structured around African creation myths, and is the perfect piece to welcome the coming of spring. 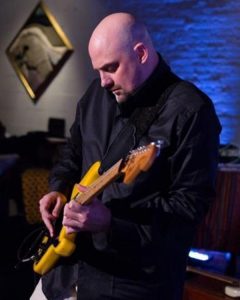 Stitt’s (b. 1972) “Alphabet City Cycle” (2009), a fusion of music theater and art song, is based on poems by Marcy Heisler. Reminiscent of the great tradition of Broadway musical theater, the songs chronicle everything from a student recovering from a breakup to a widow struggling to recall details of her deceased spouse’s appearance.

Lee’s (b. 1974) duet for electric guitar and cello, “Jun” (2012), is named after the composer’s cellist friend Jun Jensen, who composed the pizzicato cello line that opens and is developed throughout the piece. “He generously let me ‘have’ the idea and run with it, which I have with great enthusiasm,” Lee says. “Unfortunately, due to changing geographical circumstances, Jun and I never had the opportunity to perform it together; I am grateful to David Bebe for helping me put it together for this performance.”

Join the talented musicians of the Camerata, and their musical guests, for an energetic, joyous evening to celebrate the Camerata’s 15th year.

The Saint Rose Camerata
When: 7:30 p.m., March 24
Where: Massry Center for the Arts, The College of Saint Rose, 1002 Madison Avenue, Albany
Notes: Free and open to the public