Sometimes, students leave Saint Rose with more than a great education – they find a life partner, too. Getting acquainted at jazz rehearsals, spotting each other at a campus event, or noticing each other at orientation – these alumni found love with a fellow Golden Knight. 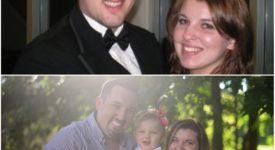 How did they meet?
Both being music majors, they crossed paths for the entire 2007-2008 school year without having a single meaningful conversation. The following summer, they were both playing in the pit for a musical production in Schenectady, and by November, they were a couple. First impressions are hazy: Greg remembers Caitlyn’s bright eyes, and Caitlyn remembers Greg’s one-liners.

What’s an important Saint Rose memory they share?
Their families used to come see their Wind Ensemble concerts. Greg was ready to introduce Caitlyn to his family and told his dad ahead of a concert that he would meet her that day. After the concert, Greg’s dad said he hoped it was the brunette flute in the middle: He picked Caitlyn out of the crowd on the first try.

When did they know they were meant to be together?
After Saint Rose, they both moved to Old Forge where Greg was teaching, but wound up attending summer graduate programs in opposite ends of the state: Greg in Potsdam, Caitlyn in Ithaca. It was during Caitlyn’s visit to Potsdam, after the couple had been separated for just a few weeks, that it became clear that being apart was not an option, and being together was just right.

Where are they today?
The couple currently lives in Deerfield, New York, a suburb of Utica. They both teach music in the Whitesboro Central School District. Greg teaches fourth- and fifth-grade band in three elementary schools, and Caitlyn teaches sixth-grade band and orchestra at Parkway Middle School, where she gets all of Greg’s students. Their daughter, Penelope, will be 19 months by Valentine’s Day, and she is expecting a little brother or sister this July. 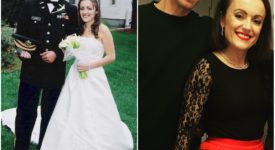 How did they meet?
They met at what once was Filene’s Department Store, where they both worked. When they first met, Anduena thought Michael was very goofy and way too playful, which she found a bit annoying. He says he was intrigued by Anduena’s beauty and the fact that she was from another country.

“He claims he knew I was the one the second he saw me,” Anduena says. “I do not know how much of that I believe, but it is sweet, so we roll with it.”

What’s an important Saint Rose memory they share?
While basketball games, lunch on the lawn, events at Wellworth Hall, and reunion weekends all make the list, there are two memories that stand out. They both involve Father Chris DiGiovine, former dean of spiritual life at Saint Rose. They were married by him in 2004, and in 2006, Father Chris officiated the baptismal for their first daughter, Sophia.

When did they know they were meant to be together?
When the couple started dating, Michael was already serving in the U.S. Army. They had been dating for about a year when the terrorist attacks of September 11, 2001, happened.

“When Michael was called to respond, I was sick to my stomach with anxiety and fear for his safety; I knew then I could not live without him,” says Anduena. “Years later, I joined the military myself, and one of the biggest reasons for my decision was to be able to understand his job in order to support him better.”

Where are they today?
They are living in Albany. Anduena is a National Guard Regional Medical Plans Officer for FEMA Region II, U.S. Air Force, New York Air National Guard; Michael is a Blackhawk helicopter pilot in the U.S. Army, New York Army National Guard. “We got married on August 14, 2004, and have three beautiful daughters, Sophia (2006), Nahla (2011), and Lucy (2014),” says Anduena. 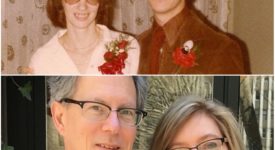 How did they meet? What are some Saint Rose memories that they share?
Mary and Ed met in Fall 1981. They were both Music majors, and they met at a Jazz Ensemble rehearsal in the evening.

That Saturday, there was a mixer in the gym, and Ed introduced himself again. That time, they talked for quite a bit longer. Ed somehow convinced Mary to go to a music festival the next weekend that was held on the Empire State Plaza. The band Blotto played, and there were fireworks at the end, and they walked all the way down and all the way back.

Where are they today?
Mary Alice is in her 28th year teaching music for grades K-8 at the Gardner-Dickinson School (the only school in the Wynantskill Union Free School District). Ed, currently the band director at Hackett Middle School, is retiring at the end of this year after teaching music and co-chairing the music department for the City School District of Albany, for 34 years.

They are looking forward to Ed’s retirement so that he can spend more time hiking in the Adirondacks. Mary plans to work another year or two at Wynantskill, and then they plan to spend their time traveling the back roads in their camper. 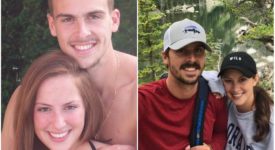 How did they meet?
Emma saw Eric playing saxophone in a Battle of the Bands competition, and he saw her at the gym. Not long after, a mutual friend of theirs introduced them.

Emma later realized that she had actually noticed Eric for the first time at first-year student orientation. “When my mom and I walked into the reception, we saw two cute boys playing guitar and saxophone,” she says. “She immediately nudged me and said, ‘Maybe you could meet one of them!’”

What’s a Saint Rose memory they share?
“There are so many!” says Emma. If they had to pick the place that holds most of their memories, it would be the Campus Green. From throwing football, to dancing to Whitney Houston, to playing manhunt, to simply running into each other after class. “I remember that being the greatest feeling of all,” says Emma. “Even just seeing each other for a few seconds between classes made my day, and his, too.”

When did they know they were meant to be together?
At first, they had no idea. “I only saw what was on the surface, and it was hard to see anything deeper than that, or get past his love for his craft,” says Emma. “I don’t think it was any specific moment, but rather, time. The more we learned about each other, the closer we became. We have so much in common, and truly became best friends. We think what makes us ‘meant to be together’ is the fact that since the day we met, we have always been excited for that moment in our day when we finally get to see each other, even after seven years.”

Where are they today?
They moved to Park Slope, Brooklyn, a year after graduation and have been there for four years. Emma is currently a third-grade special education teacher in Crown Heights, Brooklyn, and Eric is a band teacher in Borough Park. 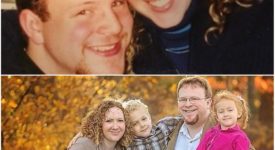 How did they meet?
In August 2000, Bryan was visiting a friend who was housesitting for Ann and Mike D’Attilio, executive director of government and community relations at Saint Rose. Bryan noticed Mary’s picture in the living room, and the friend pointed out some photos Mary had taken in photography class. With the friend’s encouragement, Bryan left a note complimenting both her portrait and her photos.

When Mary returned, she called the housesitter to find out who Bryan was and why he left a note for her. The housesitter assured her that Bryan was not some crazy guy. For the couple’s first date, Bryan took Mary to Starbucks – where he discovered she was not a coffee drinker. Coffee for him, tea for her, a couple hours of good conversation, and the rest is history.

“We discovered many mutual friends on campus, students and staff alike,” Bryan adds. “We certainly shared experiences at Silver Bay (what used to be the Silver Bay Experience) on Lake George, where we were both engaged and married.”

When did they know they were meant to be together?
“We were both very comfortable with each other from the first date on,” says Bryan. “Our lives, personalities, interests … it all just fit.”

Where are they today?
They were married in October 2003 and have two children: Connor, 9, and Mackenzie, 7, who both attended the preschool and pre-k programs at Saint Rose. 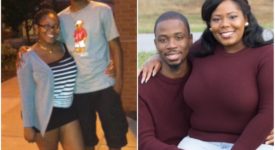 How did they meet?
They met in passing in Saint Joseph Hall, but it wasn’t until two weeks later that their true connection started. “There was a party on campus in the Standish Room,” Draneé says. “We danced together and exchanged numbers. We became inseparable.”

What’s an important Saint Rose memory they share?
“Saint Rose is where everything started for us; we’d never imagined falling in love so young, but that’s where we started our lives together,” Draneé says. “We met our best friends and people we consider family at Strose.”

The couple is busy making plans for a summer wedding, and many friends from Saint Rose who supported them from the start will be standing beside them in the ceremony.

When did they know they were meant to be together?
It was pretty clear after the two started spending all their time together – between classes, work study, and off-campus jobs – that they were probably together for the long haul. Their birthdays are just a day apart, and that is only one of the common bonds they share.

Where are they today?
The couple currently lives in Philadelphia and works in the banking industry. Steven is a relationship investment manager, and Draneé is an anti-money laundering investigator. They recently built a house, and their wedding is set for August 18, 2018. 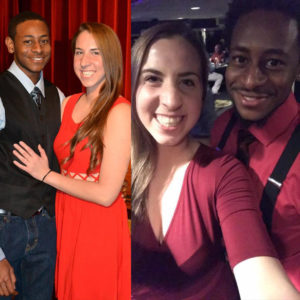 How did they meet?
They first met at the Fall Community Leadership and Student Service in College (CLASSIC), where they sat next to each other during a get-acquainted activity, a “cup song” game involving a lot of people. “It’s a wonderful icebreaker,” says Gerald. “Relying on others and keeping rhythm at the same time is a little challenging, though.” He thought she was pretty cool; she thought he was really funny.

What’s a Saint Rose memory they share?
Their most important memory from Saint Rose was attending each other’s graduation ceremonies for their master’s degrees.

Where are they today?
Currently they are living in Albany. Erica is working as a Teacher at LaSalle School, right across the street from Saint Rose, and Gerald is an accountant at Albany Molecular Research, Inc. (AMRI).