Mike Tiscione '12 learned he loved social media marketing as a student at Saint Rose. Now, he's applied that love to his Jacksonville Jaguars, and it's landed him some social media (and ESPN) celebrity. 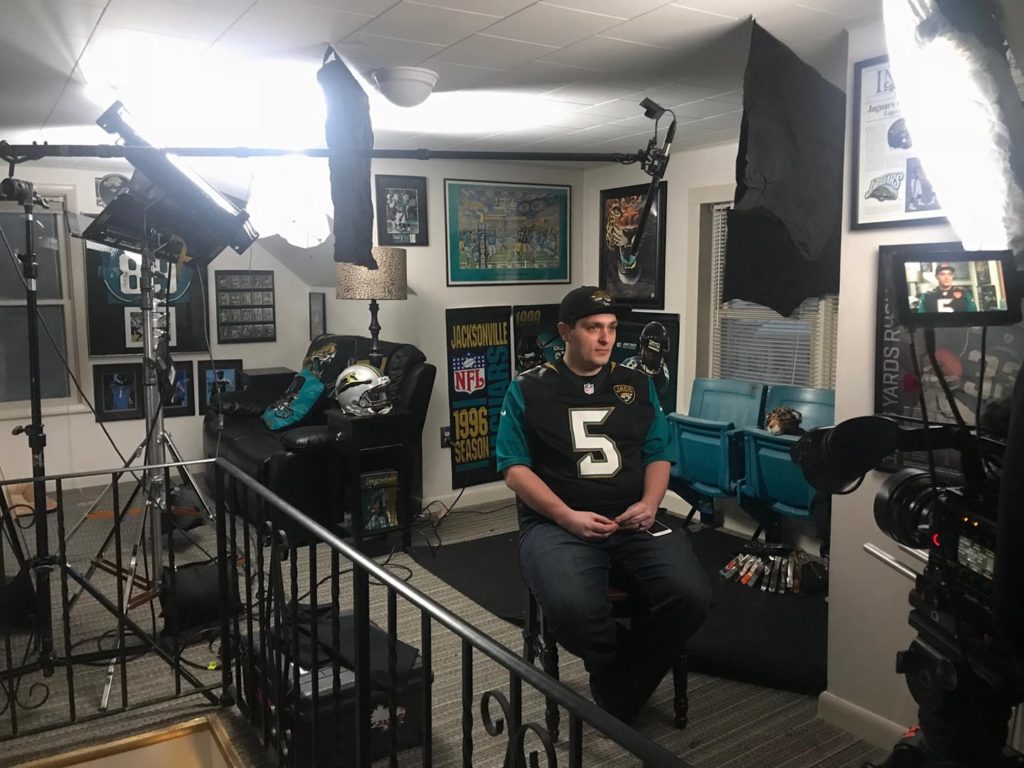 Mike Tiscione ’12 is the author of @BortlesFacts, a humor account centered on the Jacksonville Jaguars quarterback that brought Tiscione some media attention and an awful lot of Twitter followers.

Blake Bortles Fact: The guy who created the Bortles Facts Twitter account (@BortlesFacts) – which has attracted enough attention to land him an interview with ESPN, an article in The Wall Street Journal, and a question posed to the real Bortles during a press conference – is a Saint Rose Communications graduate.

And like Jacksonville Jaguars quarterback Blake Bortles, who faces the Patriots in the AFC Championship game this weekend, Mike Tiscione ’12 is also undefeated in 194 countries. You’ll find that fact about Bortles at @BortlesFacts.

Tiscione works as a social media manager for Internet Marketing Ninjas, a Clifton Park-based company. That explains why he could hit it big with a humor account that started a few years ago when Tiscione, a fan of the Jaguars since he was 8 years old, had to find a way to cope with his frustration over their dismal play. 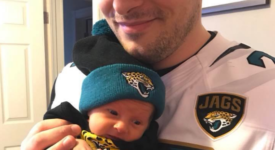 Mike Tiscione can celebrate a great Jaguars season and the birth of his daughter, Aria, who is already a fan.

But it wasn’t until September last year, when sports journalist Bill Simmons mentioned @BortlesFacts on his podcast, that Tiscione saw a flurry of notifications for the first of what would become many times.

“I was out shopping for baby furniture, and my phone blows up – hundreds of notifications every hour, hundreds of followers. It was mentioned on Bill Simmons’ podcast. I listened to the clip and he said ‘There’s this account out there. It’s criminal it only has 3,000 followers. You need to check that out. In four or five days, it went from 3,000 to 30,000,” Tiscione says. “Last month, I was contacted by The Wall Street Journal, and they wanted to do a feature on it. It came out right before Christmas. It’s spiraled out of control. I can’t believe it.”

The account has about 80,000 followers and is ever-growing. Bortles was recently asked about @BortlesFacts during a press conference and said, “I haven’t seen it. I’ve heard some of it. I think some of them are pretty funny. … It’s awesome. I appreciate it.”

The number of people who know about it will grow this Sunday when Tiscione is expected to appear in a segment at 1:15 p.m. during “Sunday NFL Countdown” about how Bortles doesn’t get a whole lot of respect. An ESPN crew came to the Capital Region this week to film Tiscione and asked him read some of his best Bortles Facts, tweets like: “Blake Bortles has a better winning percentage in the Playoffs (100%) than Tom Brady (73.5%). @Patriots” and “Blake Bortles needs 16,966 rushing yards on Sunday against the @49ers to become the @NFL’s all-time leading rusher (@EmmittSmith22: 18,355).”

Blake Bortles has never been suspended by the @NFL for deflating footballs. @Patriots pic.twitter.com/ArciJW7w9u

And, really, we can say this all started at Saint Rose, where Tiscione’s concentration was in public relations and marketing. @SaintRoseFacts

“I took an internship while I was at Saint Rose for PR specifically, and I hated it. Right when I realized that, I was just starting a round of classes where we dove into Twitter and FB marketing, and I knew right at that moment, that that’s what I wanted to do. I don’t remember the name of the class, but it was with Karen McGrath, and it was a project with Twitter,” he says. “My whole education there through that program in general – but especially with the social media aspect – definitely helped me a great deal where I am now.”

“I haven’t seen it. But I appreciate it.”@Jaguars QB @BBortles5 feels the support from @BortlesFacts 😂

By day, Tiscione specializes in social media marketing, a job he landed right out of college, with a focus on clients in the financial, sports, and automotive sector. Ever since his @BortlesFacts account became big, he’s tried to squeeze in three tweets a day. On game day, he’s living for every play like any other die-hard fan, except that he always recognizes moments with Twitter potential.

“I’m the biggest fan at heart, and I would rather all day see them win on Sunday 100 times over than any of this. Any of this that’s happened, I would rather just see them win. Because it’s been a long time. Even though they’re still a relatively new franchise, it’s not fun being one of four who have never been to a Super Bowl,” says Tiscione, who will be at Sunday’s championship game. “Mostly everyone who has contacted me about this the past couple of weeks tells me what a great story it is. And I think that, to me, I can’t grasp why. I’m just a fan with a Twitter account.”