Artist looks at identity – racial, social, and psychological – in abstract work meant to make you feel a little bit uncomfortable. 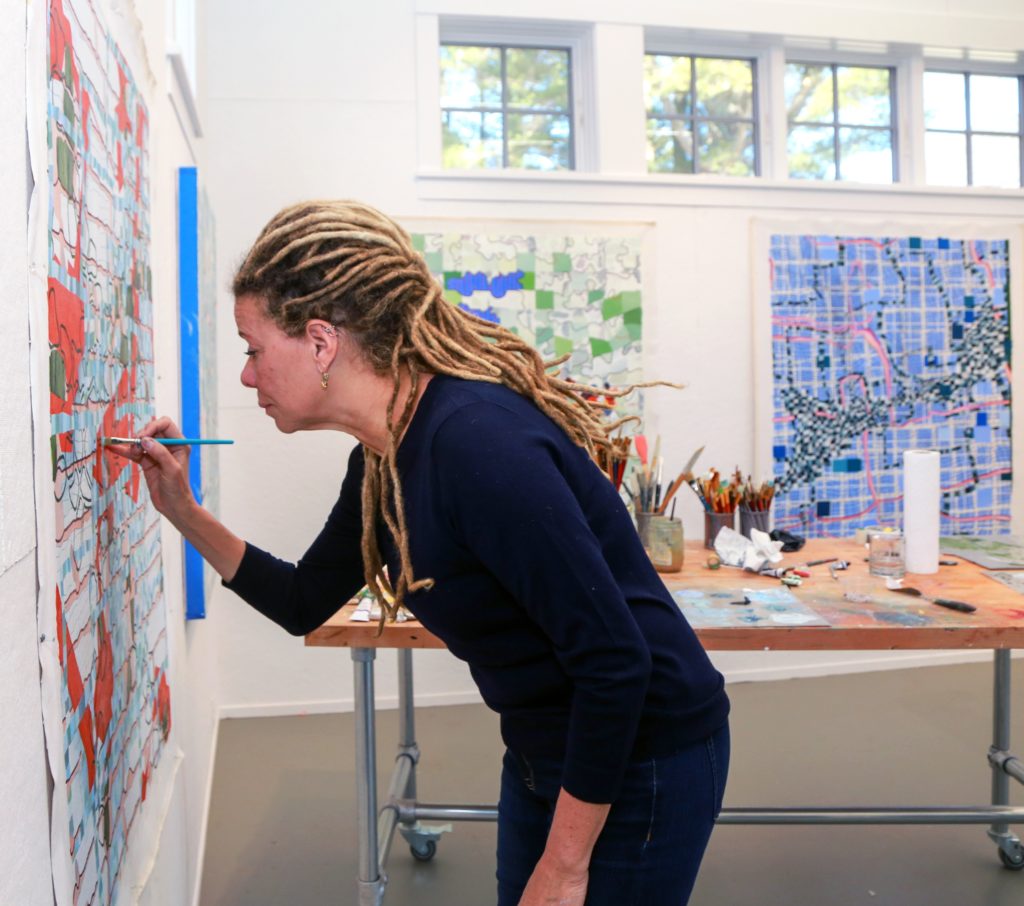 Lisa Corinne Davis work will be exhibited at The Esther Massry Gallery at The College of Saint Rose from January 20 through February 24. (Photo by Joanna Eldredge Morrissey)

Looking at Lisa Corinne Davis’ oil paintings, you may be first struck by the intricate patterning and detail, or by the startling contrasts in color and motif. Bright, multicolored DNA-like ribbons weave through monotonous gridlines. Tumescent cells, the color of dried blood, swell within cool quilt blocks. Nerve-like growths splotch across what looks like a creased roadmap. There is something familiar here, yet unnamable; the result is arresting and unsettling.

Provocatively juxtaposing the artificially ordered and the organic, Davis’ work represents her exploration of identity: racial, social, and psychological. As a light-skinned African-American woman working in the art world, Davis says she is only too conscious of how our desire to label and categorize can limit our own identity. Her art expresses the complexity and conflict inherent in being an individual in the modern world.

Her many awards include the Louis Comfort Tiffany Foundation Grant, a National Endowment for the Arts Visual Artist Fellowship, and two New York Foundation for the Arts Visual Arts Fellowships. She was inducted as a National Academician into the National Academy Museum and School. Currently a professor of painting at Hunter College in New York City, Davis has taught at Parsons School of Design, the Cooper Union, and Yale University. She holds a B.F.A. from the Pratt Institute and a M.F.A. from Hunter.

Her exhibition, “Turbulent Terrain,” shows at The Esther Massry Gallery at The College of Saint Rose January 20 through February 24.

Q: What is the concept behind your paintings?

A: I work with a vocabulary that has two parts. The first I call “objective,” meaning there are things you trust more than other things: straight lines, grids, maps, information systems. The second I call “subjective,” which is more psychological: organic forms, spills and drips, toxic or artificial colors. In every painting, I mix the two, so the viewer is caught between whether this is information or facts they’re receiving, or something they have to interpret as an individual.

Q: What is your process?

A: I have no plan. I start with one or the other side of that vocabulary – I’ll put a grid down, or some organic shapes. And the conversation begins. I go back and forth with these vocabularies, weaving the two together, until the space is hard to settle in – what’s the top? Bottom? Forward? Back? What’s macro? Micro? I don’t want my paintings to be pretty. I want them to be a little disturbing.

I like the malleability that oil provides. I try to navigate the breadth of what the medium itself implies and can do. Sometimes it’s very thin and transparent; sometimes more caked on the surface. It takes time to dry, which gives me a decision-making timeframe I really need. I work on four, five, six paintings at a time. 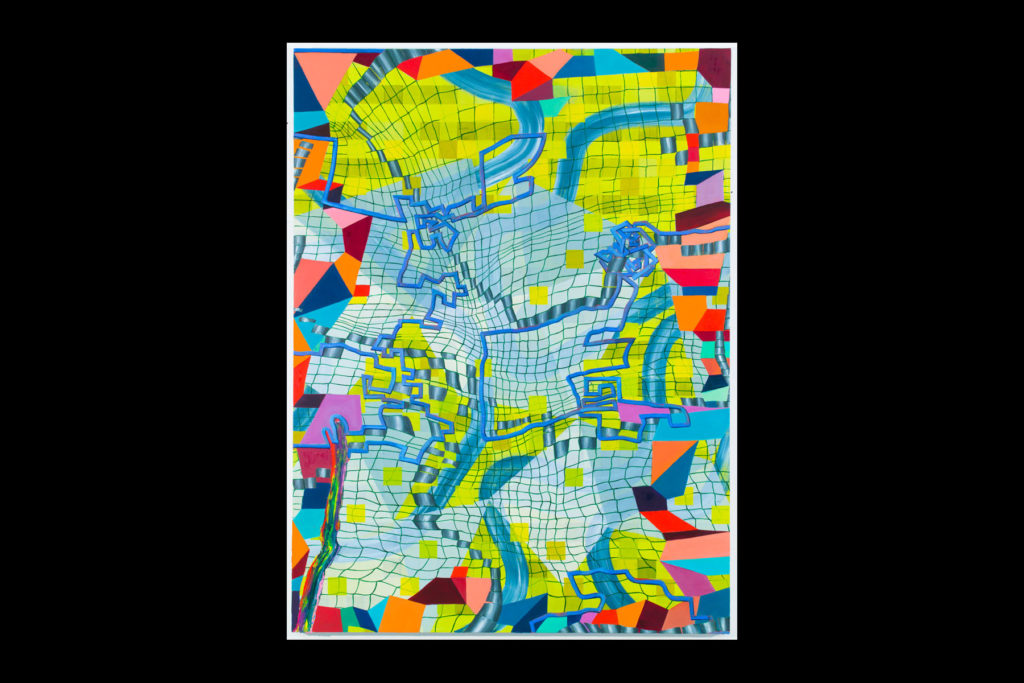 Q: How does identity figure in your work?

A: The point where my work actually became my work was when I began questioning my own position in the world and how I was read and understood by others. I realized that some people had an impulse to label me. I became aware that humans have this tendency to organize, categorize, simplify complex things. We have these nice little titles to describe people’s identities, which are really more individualized and valuable.

I’m interested in this idea of what we trust, the desire to have things be simpler, but also: What is truth, what is fiction, and how can we all see things on the same page when we’re all so different?

Q: How did you develop your style?

A: I’d had my first child, from a white husband, and this question of identity came up. I did little ink drawings of myself, which I would cover in graphite, then draw on top of that, in white pencil, an object from a culture like an African mask or Greek vase. The first thing you’d see was this object you could clearly identify culturally, then this reflective graphite surface, with this person lurking in the background. The question I was setting up: Is there a relationship you can make between the person in the background and the object in front?

I did other works dismantling old history books, writing stories in the margins, and redrawing the drawings. That got a little dogmatic and preachy, and I wanted people to wander more in the work, ponder and question, and so abstraction became the perfect route for me.

Q: Is it useful to define artists by demographics, like “black” or “female?”

A: Sometimes we create comfort zones by pulling outsiders into a group, but sometimes that group becomes just as rigid as the group we’re outside of. So, while I understand, I also question the impulse to do that. If you’re not accepted in the art world writ large, the way it has been, white and male, the tendency is to say, “OK, I’m going to create my own thing.” But if that zone doesn’t even talk to the other zone, and they’re two completely separate worlds, what’s the value of that?

What is the value of a firm, defined identity? Doesn’t that cliché or oversimplify individual identity – even eradicate it?

Those are the kinds of questions I toss around in my paintings.

Q: How did you discover art? 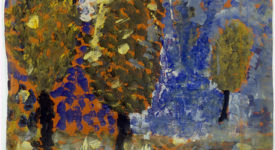 The process of creating this painting in second grade inspired Lisa Corinne Davis to become an artist.

A: When I was in second grade, the teacher took us outside with some sponges and paint, and told us to paint a landscape. I made this painting where the trees in the back were small and the trees in the front were big (somehow I intuited operations of perspective at that age). I was amazed that somehow that medium of paint, and that tool of a sponge, could mimic leaves. The idea of translating a world onto a page with those two tools seemed like magic to me.

I was hooked from that moment on. I was really interested in creating these worlds on that two-dimensional surface. Nothing seemed to be a better thrill than that.