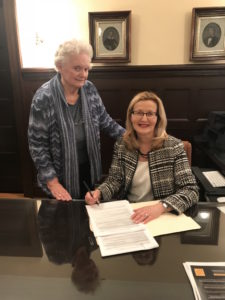 Sister Mary Anne Heenan, CSJ, shown here with President Carolyn J. Stefanco, was elected chair of the College’s Board of Trustees on December 6, 2017.

The College of Saint Rose Board of Trustees announced on December 6, 2017, that Sister Mary Anne Heenan, CSJ, has been elected Chair of the Board. An alumna of Saint Rose, Sister Mary Anne is the director of the Albany Province of the Sisters of St. Joseph of Carondelet, the religious order that founded Saint Rose, and a former school superintendent.

“We are so fortunate to have in Sister Mary Anne deep educational and administrative experience, distinguished community leadership experience, and a direct tie to our beloved founders, the Sisters of St. Joseph of Carondelet who established Saint Rose nearly 100 years ago,” said Carolyn J. Stefanco, Ph.D., president of The College of Saint Rose. “Sister Mary Anne has twice served on our Board of Trustees, from 1988 to 2004 and again since 2010. To the position of first vice chair, she has brought a passion for educational excellence and for Saint Rose’s continued evolution to serve the changing needs of our students. Our entire community will benefit greatly from her leadership.”

Norman Massry, the longest-serving member of the Board of Trustees, has been elected as first vice chair. Mr. Massry, a partner in Tri-City Rentals, is a distinguished Capital Region business leader and philanthropist. He joined the Saint Rose board in 1988.  “Sister Mary Anne is deeply committed to the mission of Saint Rose and will keep our Board of Trustees very focused on strengthening the College for the next 100 years,” Mr. Massry said.

Sister Mary Anne is the former superintendent of the Catholic Schools of the Diocese of Syracuse and a senior consultant with Wisconsin-based Meitler, a strategic consulting firm serving Catholic and other faith-based schools nationwide. In 2013, she was elected director of the Albany Province of the Sisters of St. Joseph of Carondelet. The order, founded in France, was established in the United States in 1858 in New York State; its 1,500 members today serve in the United States, Peru and Japan. In Upstate New York, the Sisters of St. Joseph of Carondelet have long served as teachers, parish ministers, hospital chaplains and in other public ministries.

Sister Mary Anne is a former chair of the Board of Directors of St. Mary’s Hospital in Amsterdam; former chair of the New York State Catholic School Superintendents Council; and a former member of the boards of the Saint Francis Adult Day Care Center in Syracuse; Support Inc. of Syracuse and Junior Achievement of Central New York. She is currently serving as secretary of the St. Mary’s Hospital Board and as a Director of the African Sisters Educational Collaborative.

Sister Mary Anne succeeds Judith Calogero who has served as a member of the Saint Rose Board of Trustees since 2007 and as chair since 2014. Ms. Calogero, also a Saint Rose alumna, received a bachelor’s degree in sociology and social work in 1980. She earned a master’s degree in urban planning from Rensselaer Polytechnic Institute. She is a former commissioner of the New York State Division of Housing and Community Renewal and is president of Calogero Partners, a real estate consulting firm.