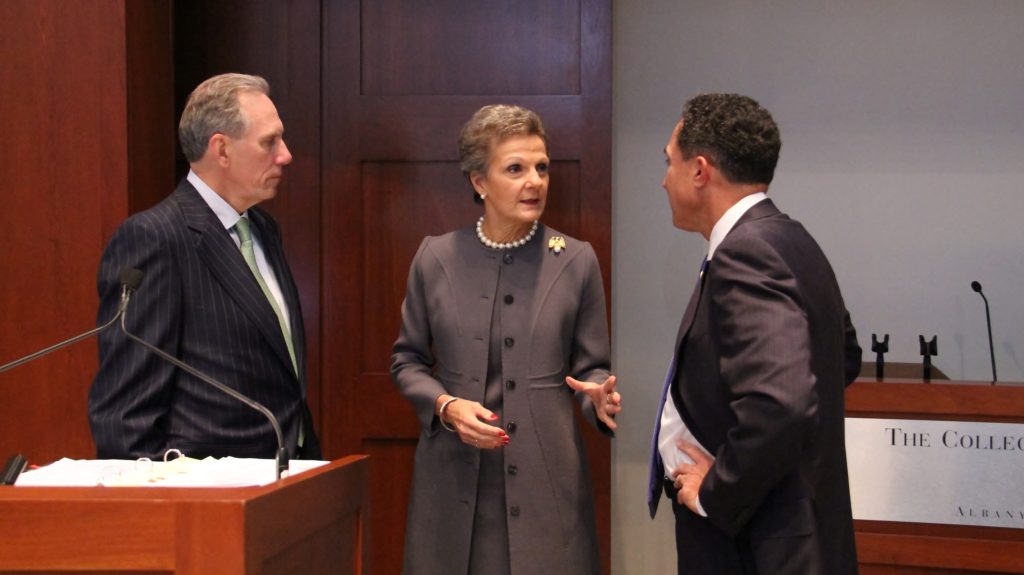 Judge Loretta A. Preska will participate in a panel discussion on the First Amendment on November 9.

Is the First Amendment really a license to say anything? Does voicing an opinion always have to set off an argument?

“The protections and limits of the First Amendment are at the forefront of many discussions and debates in higher education and across American society,” said Saint Rose President Carolyn J. Stefanco. “Our role at Saint Rose is to educate students about these issues, and to serve the community by providing a forum on how to improve discourse about divisive subjects. We are excited to have such an esteemed panel of experts guide us in this exploration.”

Burton has overall responsibility of day-to-day management for Hearst’s Office of General Counsel, which provides legal services to all of Hearst’s businesses around the world. The Office of General Counsel has a dedicated initiative to the ongoing protection of First Amendment rights for its journalists and the preservation of a free press. For its work, Burton’s office was awarded a lifetime First Amendment Award from the Reporter’s Committee for Freedom of the Press in 2016.

Chapleau was a chief assistant district attorney for Schenectady County for 18 years. In addition to being a tenured faculty member at Saint Rose, he is an instructor and curriculum advisor for the New York State Office of Court Administration, Office of Justice Court Support, who assists in the training and development of certification and continuing education for approximately 2,100 town and village justices throughout the state.

The panel will be moderated by Daniel P. Nolan, Esq., partner and CEO of Hugh Johnson Wealth Advisors, with opening remarks by Rex Smith, vice president and editor of the Times Union. The event is free and open to the public and will be held in the Carl E. Touhey Forum, Thelma P. Lally School of Education, 1009 Madison Ave., Albany. Parking will be available in the Events and Athletic Center lot off of Western Avenue or behind the Massry Center for the Performing Arts off of Madison Avenue. Register by emailing crastoc@strose.edu.