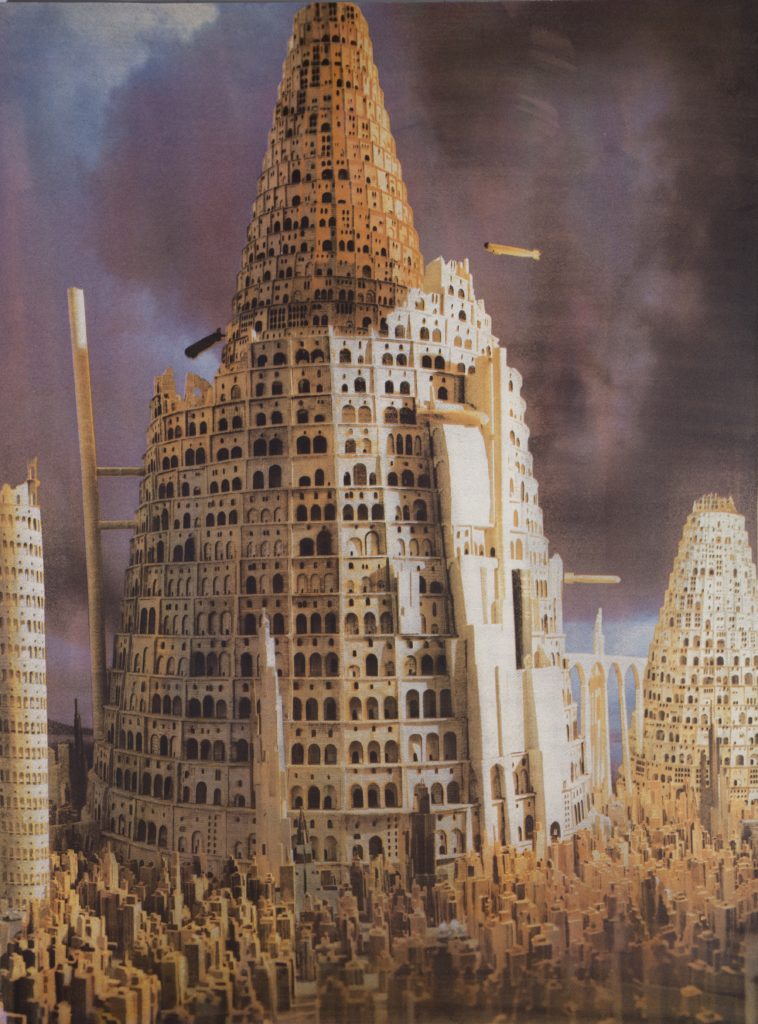 What inspired German artist Lothar Osterburg to create a dream world equipped with a 27-foot tower covered entirely in books in more than 25 languages? As a German immigrant, his artwork is a window into his past as well as into the future.

Osterburg creates his artwork in stages. He takes found materials and builds small-scale models of imaginary cities and worlds. He then photographs these models and prints them in the 19th-century photographic process of copperplate photogravure. The result is a multi-dimensional world caught between reality and fantasy.

When he isn’t imagining new worlds, the award-winning artist teaches printmaking and photographic printmaking at Bard College in Dutchess County. His work is held in numerous collections across the country, including the Metropolitan Museum of Art, Library of Congress, Art Institute of Chicago and New York Public Library.

His exhibition, “Reaching for the Sky,” will be on exhibit at the Esther Massry Gallery at The College of Saint Rose Oct. 6 through Dec. 2.

Q: “Tower of Babel” is a 27-foot sculpture made up of books. What inspired it?

A: While looking on the streets of Brooklyn, I found (books with) over 25 different languages. People putting books on the sidewalk for people to pick up or in recycling bins.

(Tower of Babel) that’s basically the celebration of diversity and the celebration as an immigrant. For the first 20 years, I wanted to be an American. It is very typical for immigrants to want to fit in and not be an outsider. Everyone is an immigrant to some degree even if it’s five generations back, but in New York where there are so many first-generation immigrants, I felt, why am I hiding this? I should just accept it as it is. I finally have come to terms with it. I am an immigrant, I still have an accent, so what?

Q: How did emigrating from Germany influence your work?

A: This “Tower of Babel,” I don’t think could have happened if I hadn’t embraced my own heritage as an immigrant and made this the subject of it. Before (“Tower of Babel”) I actually made a series called “Yesterday’s City of Tomorrow,” which is … how a person that has never seen New York (City) perceives it. You can travel anywhere in the world and say, “I live in New York,” and everyone has a very strong and vivid reaction to that. Because they have a clear idea of what New York is. Even if they have only seen it in the movies and are maybe completely wrong, it’s very vivid. So I worked with that notion of the perception of New York from the outside as this ideal place – the city where the streets are paved in gold, the opportunities, the city that never sleeps, the romanticized and dangerous and wondrous place that is kind of more mythical than real.

It was all created with models, but there are no models of that in (the exhibition). They are prints. Most of the time in the past, the models were not a part of my artwork, they were just a step to make a photograph to make the prints from.

Q: Can you describe the exhibit as a whole?

A: It is a trajectory of my artistic development toward the “Tower of Babel,” which I am showing here, too. The very earliest piece, which is relevant to that is … inspired by 18th-century Italian artist Giovanni Battista Piranesi and his imaginary prisons, which is a series of etchings he did. We share the same birthday. He emigrated from Venice to Rome when Venice was a different state from Rome.

Piranesi made etchings of huge imaginary spaces and vaults. He drew from imagination. He did this because he couldn’t get a job as an architect. He became a printmaker using his architectural draft skills to draw scenes of Roma to sell to the booming tourist trade that happened in the 18th century. 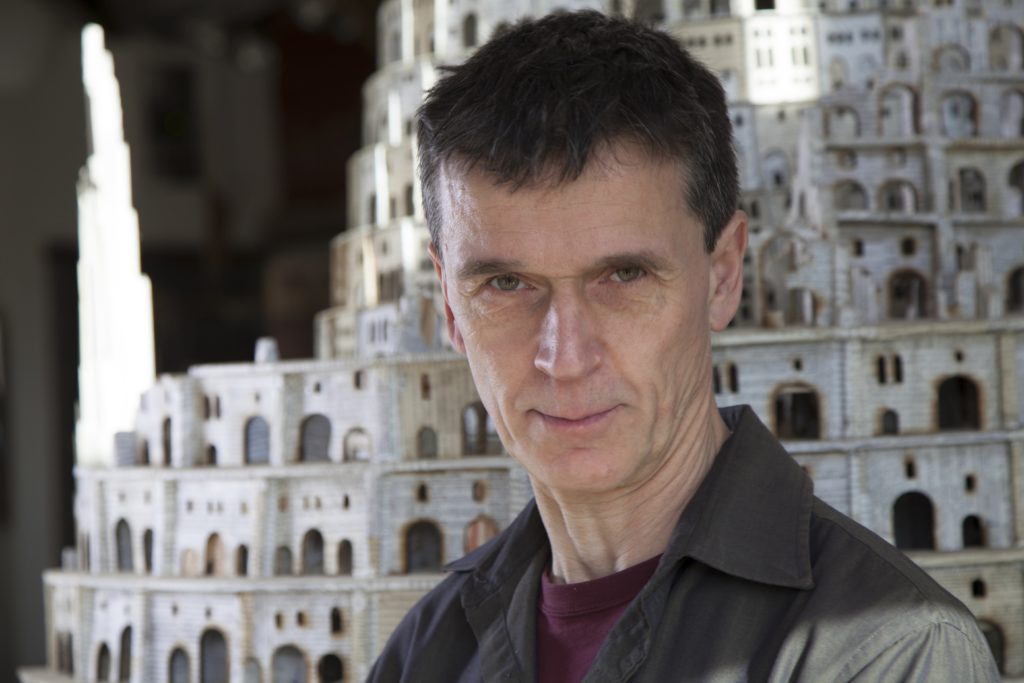 Q: How would you explain your artistic style?

A: Copperplate photogravure is a 19th-century photographic printing process and intaglio printing process. Intaglio means any area that has been etched deeper into the surface, in this case a copperplate, will hold the ink. The deeper an area is etched, the more ink it will hold, and the shallower it is etched, the lighter the area will be. It is a continuous tone photograph rather than the half-tone photograph we see in any kind of photographic production today.

A lot of my work is not necessarily of the present, but of a dream world, of another time, of an alternate time, and I find that the photogravure is a non-contemporary process that really fits the subject.

Q: What is it like to teach printmaking to younger generations of artists?

A: Printmaking, just as a city, is a historic process, which was always driven by faster, cheaper and easier. Before we had printmaking, people were handwriting Bibles – one Bible a year and that is very expensive to produce. With the invention of the movable type by Gutenberg (it was) a revolution, but people weren’t ready for that. So he carved every letter slightly different to give it a handwritten look.

Fast-forward- (to) those big companies developing highly sophisticated, mostly computer-driven new technologies like print on-demand. It is amazing. It is accelerated still to this day for the sake of printmaking faster, cheaper, easier, but what falls by the wayside is the quality. … How can we invent new technologies if we have lost touch with the knowledge of how we do the potato print – even as simple as that is – and everything in-between? I am not just teaching printmaking for the beauty, but for the knowledge and results, also as a historical preservation, basically as an art historian of practice rather than the artifacts.

What: “Reaching for the Sky,” an exhibition by photogravure artist and printmaker Lothar Osterburg

When: Oct. 6 through Dec. 2. Gallery hours are: noon to 5 p.m. Monday through Saturday (and until 8 p.m. on Wednesday and Thursday). The gallery is closed Sunday and for academic holidays.

Where: The Esther Massry Gallery at The College of Saint Rose, 1002 Madison Ave., Albany

Notes: An opening reception will be held from 5 to 7 p.m. Oct. 6. Osterburg will present a lecture at 7 p.m. Oct. 6 in Saint Joseph Hall Auditorium, 985 Madison Ave., Albany. All gallery events are free and open to the public.