Finding Answers in the Lab 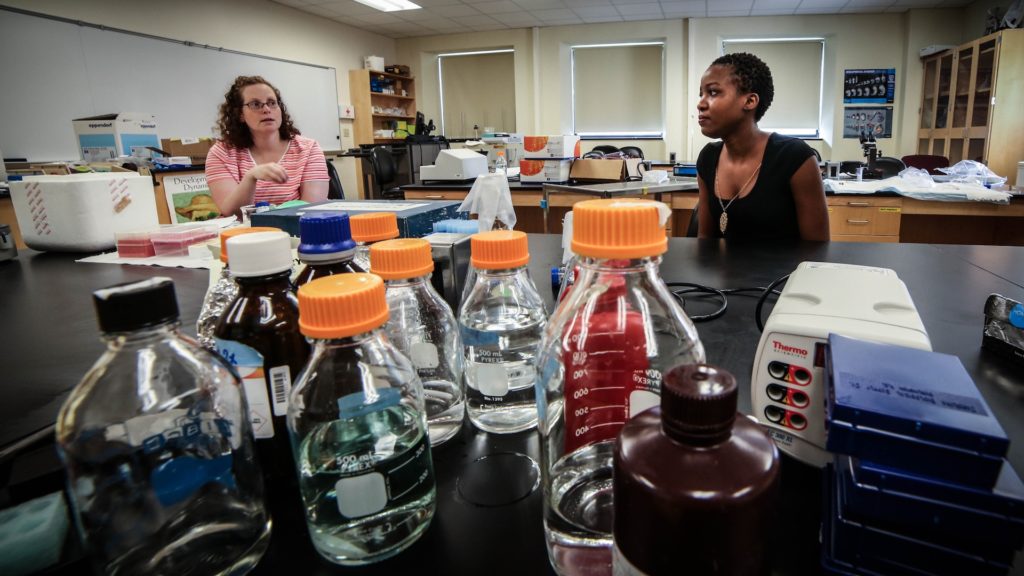 Dr. Rebecca Landsberg, at left, looks for signs of fetal alcohol syndrome in less-explored regions of the brain. Her Saint Rose students, including Hellen Jumo, assist.

Scientists have long known that women who consume alcohol during pregnancy greatly increase their risk of having babies with physical or cognitive delays. They also know that the damage can be observed in the cerebellum, the region of the brain that controls balance and motor function.

But as she studied brain development, Dr. Rebecca Landsberg, a Saint Rose biology professor, noticed researchers focusing on fetal alcohol syndrome seemed to look at the cerebellum without considering the lesser-known system it relies on.

“The cerebellum is the region of the brain everyone looks at because it regulates coordinated movement,” noted Landsberg.

A developmental neurobiologist who earned her Ph.D. at the Massachusetts Institute of Technology, Landsberg has studied the precerebellar system for 14 years. Since her arrival at Saint Rose six years ago, she has investigated how the system is damaged in individuals with fetal alcohol syndrome. Now, scores of her students have benefited from her work.

During labs, at conferences and over the summer, Landsberg has engaged motivated students in primary research on fetal alcohol syndrome, an illness that is completely preventable. They have presented posters at the College’s annual undergraduate research symposium and before the Northeast meeting of the Society for Developmental Biology.

Some have also leveraged these experiences to gain the attention of graduate schools.

“It was on my resume, and that definitely had a role in Quinnipiac’s decision,” said Travis Townsend ’17, a biology major who will soon pursue a master of health science at Quinnipiac University in Hamden, Connecticut.

Townsend, who took part in the campus research symposium and the developmental biology society meeting, said doing so added a dimension to his role as a student.

“I learned how to work independently and to have a good eye for detail,” he explained. “You have to have these tools to help you when no one else is around.”

As he and his classmates have gained valuable skills and knowledge from the close collaboration, Landsberg said the students have helped her balance her roles as professor and research scientist. 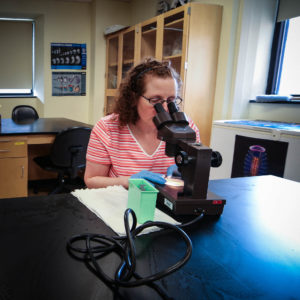 “This is every professor’s dream, to take talented students and give them the opportunity to do bench work,” she noted recently, on a quiet summer afternoon in a third-floor lab in Albertus Hall. “And hopefully, we can get some data that could go on a poster or into a paper.”

Assisting her that day on the painstaking work was Hellen Jumo, a biochemistry major entering her sophomore year. Jumo, who had earned a six-week College summer research grant, said the experience meant doing something different every day – and sometimes waiting long stretches for results.

She learned to use a crytostat to obtain sections of tissue, and then conduct experiments to assess any molecular changes caused by  alcohol exposure. Professor and student watched to see whether neurons in the samples treated with alcohol responded differently than those not exposed to alcohol.

Though the overall research will take years to complete, the experience was already a game-changer for the student.

Jumo came to Saint Rose a year ago from Zimbabwe, where she grew up in a town with no medical resources. When she was 10, her mother contracted tuberculosis, and the only treatments were pain medicine and traditional healing remedies. Neither worked, and her mother died.

“That changed the way I was thinking. I knew then, if I could, I wanted to make a change,” said Jumo. “I knew I wanted to be a doctor.”

She said the ability to work closely with a faculty member was beyond what she could have imagined. Landsberg, in turn, said she was pleased to have a talented student distinguish herself so early in her College career – effectively giving them four years to collaborate on the research. 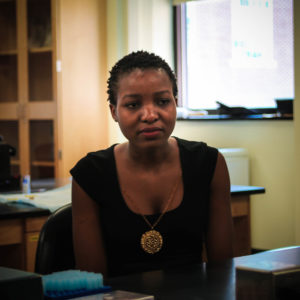 Like Jumo and many other students she works with, Landsberg had an early interest in science and in curing diseases. She studied biochemistry at Wellesley College and planned to go to medical school until she spent time in the lab and became hooked on research.

A turning point came when she worked in the lab as a doctoral candidate at M.I.T. She examined mice that were expected to develop tumors but instead wound up with developmental defects, including problems in the cerebellum. The findings inspired Landsberg to pursue postdoctoral work in brain development at Harvard Medical School.

Ultimately, she chose to teach at a small college instead of a research university so that she could work closely with students. The collaboration has gradually produced results. Landsberg said she and her students have documented the direct effects of alcohol on the precerebellar system and the fact that these effects surface early in pregnancy.

“We need to have a general understanding – and not just on the obvious regions of the brain,” she said, “because if there is ever some type of intervention or therapy, you need to know everything that is affected by alcohol.”