He Grew Up Poor in Zambia. Now Edson Chipalo Goes from a Hut to the Ivy League and Beyond

May 10, 2017 — People who struggle to meet their day-to-day needs don’t often spend a lot of time strategizing about how to get into college. But from adolescence, Edson Chipalo laid plans to enter the classroom and immerse himself in his studies, even as he scrambled to light his house and feed himself. 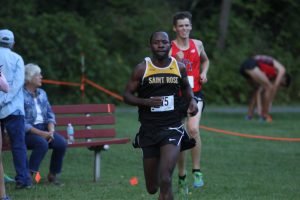 A sharp intellect, inborn optimism and single-minded focus on higher education have paid off. Against the odds, Chipalo, 29, has visited 15 countries and distinguished himself as a student, leader and athlete.

At Saint Rose, he won the Class of 2017 Academic Excellence Award and was named Senior Male Scholar Athlete of the Year, recognizing his GPA.

Here, he discusses a background of hardship most Americans only read about, his love of Saint Rose and his knack for memorizing maps 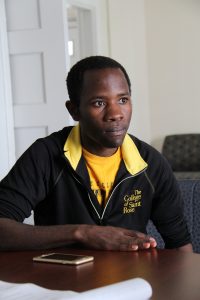 On childhood: I was born in Zambia (in southern Africa) in a small village.  My dad died when I was little and later my mom also died, of malaria. I was around seven. My grandparents had custody of me. They were subsistence farmers who produced maize, beans and peanuts.

By the time I was in eighth grade, I was kicked out of school because my grandparents couldn’t afford it. I started doing farming, taking care of goats. I was devastated. I knew from the early stage of my life that education was the only way I would get out of poverty.

On his aunt’s clock: Although my grandparents had never been to school, they tried to help me. Things worked out. I got back in a year later. My aunt had a very big wall clock she sold to pay school fees and the fees to sit for required ninth-grade exams.

On how high school was a mixed bag: I grew up with a lot of people discouraging me, bullying me and making me feel like I’m not going to go anywhere because of living in poverty with grandparents who were illiterate. I never had a parental experience. I never lived in a house with electricity or running water. We had a hut.

I never slept on a bed. We used to take a sack and put dried grass in and sew it in. Also, my clothes were not the best. I sometimes walked barefoot.

What motivated me was when I read Nelson Mandela’s words. He said, “Education is the power we can use to change the world.” I looked at what he himself went through to become president. I thought I could resurrect my dreams through education.

Most kids who grew up orphaned ended up living in the streets. I was determined. I said, “I’m gonna change my life no matter what.” 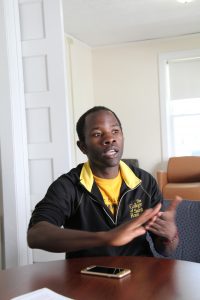 On the magic of maps: I found I was very good in geography. Each time we had an exam I got 100.

It opened up possibilities for me, knowing more about the world. I could draw a map of the world in my mind. I could tell you the countries, the capitals the populations, the cultures. Even now, I can still do it.

On what it took: To study at night I made my own light, called a kolaboi. You take a bottle and remove the cap and drill a hole in the cap. You put kerosene in the bottle, replace the cap, put a thread in it and light it. I used to buy a box of kerosene and it would last a week.

My grandfather worked as a security guard and my geography teacher connected me to social welfare and they helped pay for school. I used to sell corn, beans and peanuts. I did well and graduated from high school.

On wanting, and waiting: College was the next step, but I couldn’t afford it. I moved to Lusaka, the capital of Zambia. I couldn’t find a job. In Zambia, they don’t have many jobs. For three weeks, I slept in the bus station.

I used to go embassies and get the addresses of colleges abroad. I applied to 10 or 20 every month by snail-mail. I didn’t know about the internet. The first time I touched a computer was 2006.

The colleges sent applications and asked about the application fee. I never had money to pay the fees of $100 or more. It didn’t stop me from trying. For four years, I tried everywhere: U.S., Canada, U.K., Norway, Japan, Australia, New Zealand. 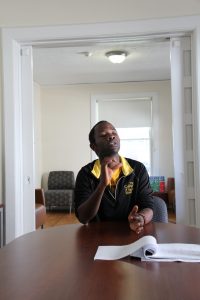 On college, at last: Finally, I started working for the electric company. I was digging trenches, making just enough to survive, renting one room with friends. That’s when I started saving to go to college. I went to the University of Zambia.

Sometimes, my job wanted me to be there when I was at class. The job kicked me out. So I started working as a security guard. Sometimes, I abandoned the site to attend classes. After a year I had to quit that job because it conflicted with school. I would go hungry, sometimes for three days.

I started volunteering with Children in Crisis. My role was to identify orphans and put them in the program. I graduated from the university with a diploma in social work, equivalent to an associate’s degree.

At first, I wanted to become an engineer. But after contemplating my experience as an orphan, I wanted to do something related to helping people. I chose social work.

(Chipalo traveled to the United Kingdom and New Zealand as a volunteer with the Camphill organization, assisting elderly individuals and people with disabilities. He eventually came to the Camphill campus in Columbia County and from there started at Berkshire Community College. He graduated with a 4.0 GPA, having served as student trustee and statewide and community college state representative. )

On Saint Rose: After Berkshire, I applied to 10 schools. I chose Saint Rose. They were very responsive, unlike some colleges that would take weeks to respond. I loved the college so much, I liked the location. It was small. I said, “I’m not going anywhere else, this is my destiny.” They transferred my credits and I was given merit scholarships.

I received so much support from the professors: Maureen Rotondi, Janet Acker and Deborah Reyome. They are like family. Also, Colleen Thapalia (director of the Center for International Programs.) Anytime I needed anything, she’d step in. Having this unwavering support is a reason I have succeeded in my academics. 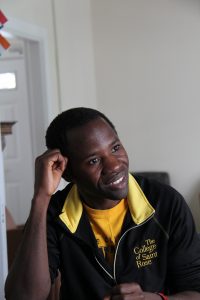 On the classroom: Certain topics I’ve been able to relate to because of my horrible background and coming from a different culture. I shared my story, and the misconceptions people have about Africa. I grew up in poverty, but not everyone in Africa does.

On branching out: I am a college tour guide and orientation leader. I’ve been very involved in cross country and the track and field team. It’s helped me make friends and I like the discipline. I have learned a lot from my coach, Andrew Rickert.

It took months before NCAA could confirm my eligibility because of coming from another country. I was very optimistic, though I missed the whole semester before I could run. Giving up is something I don’t believe in.

On helping others: I have an internship with the U.S Committee for Refugees and Immigrants. I help people from all over the world who don’t speak English have access to healthcare, language services and other important services.

I tell them, “You are going through this but I can tell you, you can make it.” Helping less fortunate people gives me much joy because I know what it means to struggle. 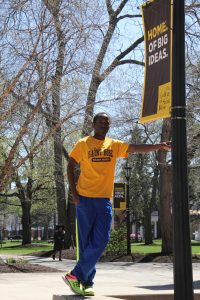 On going from a hut to the Ivy League: I will study for my MSW at Columbia. After graduation, I hope to work with international organizations such as the United Nations and, eventually, I want to go to law school to study immigration or international law.

My life has been a journey from grass to grace, pessimistic to optimistic and despondency to hopefulness, from far-fetched dreams to reality. I didn’t want to continue in the cycle of poverty I never chose to be born into.

I am geared to join the cause – to be the agent of change society needs.