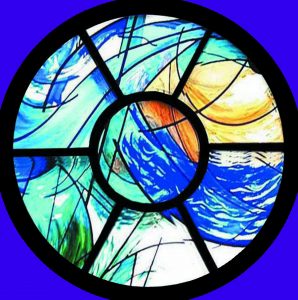 May 2, 2017 — On his second day at Saint Rose, Sean Butler was lonely. It was a Sunday, and quiet. He walked around campus and, eventually, he heard singing coming from a small brick building along Madison Avenue.

“A Mass choir was rehearsing. I poked my head in and they invited me to sing,” said Butler, a freshman studying music. “I said ‘Wow.’ I hadn’t sung in so long. That moment was when I got involved in the community, the Sanctuary community.”

Students who visit the Hubbard Interfaith Sanctuary often have stories like this. It is singular space that seems to draw them whether they are looking or not. They find a quiet place in which to study, socialize, plink on the Steinway, take in a lecture, gather after a sad event or share a meal – as well as to worship as Christian, Hindu, Muslim or Jew.

The Sanctuary turns 20 this year. That means 20 years of coming for solace or prayer, to plan a service trip or attend a lecture. Over the years it has evolved into a regional center for interreligious dialogue, a place that area religious and elected leaders seek out when they want to hold discussions or vigils among the Capital Region’s interfaith community.

Foremost, though, it represents the softer side of college. 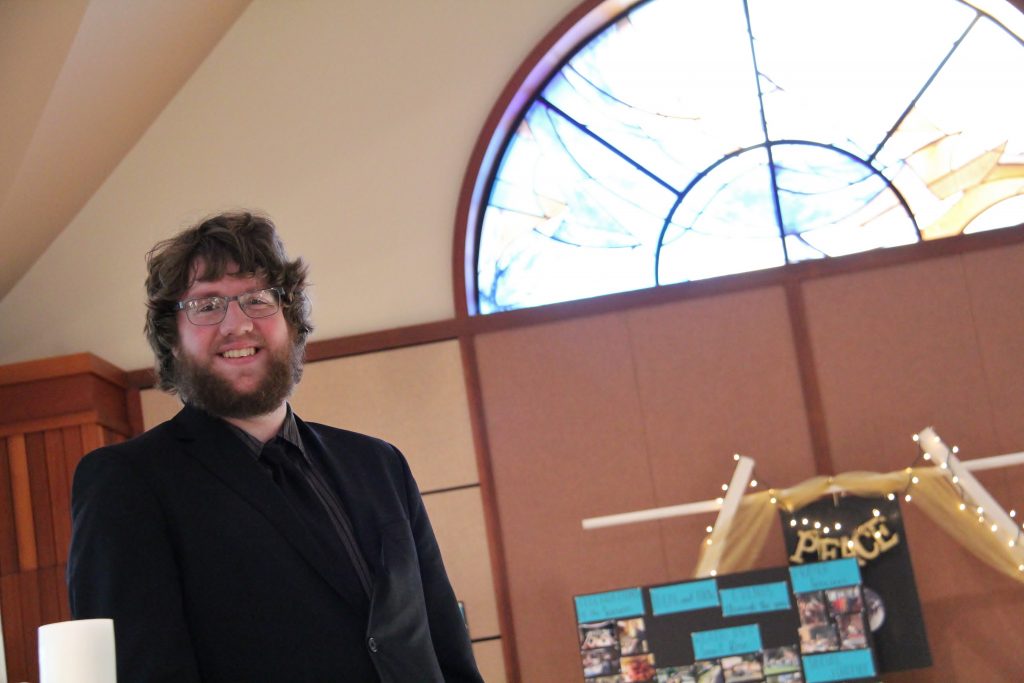 On his second day at Saint Rose, Sean Butler found a welcome in the Sanctuary.

Visitors who sign the Hubbard Sanctuary guest log share thoughts that are both secular and spiritual. “I am Muslim and I came to pray;’’ “Trying to Find God – Thought I’d look here first;” they have written recently, along with “Friendship was found in this place,” signed by six.

At not more than 2,000 square feet, the two-story center packs in a great deal. On the upper level, a room on the west side dedicated to Christian prayer includes a tabernacle for those of Catholic faith and stained glass windows showing angels. To the east, a prayer room facing Jerusalem and Mecca holds sacred books of Judaism, Islam, Hinduism and Confucianism. Absent are depictions of people or animals, which some faiths consider idolatry.

“It’s a place to be still,” said Maria Hartz, a senior and leader of Better Together, who said she has relaxed there “ever since I was a freshman and I needed a place to go to cry when my roommate was in the room.” 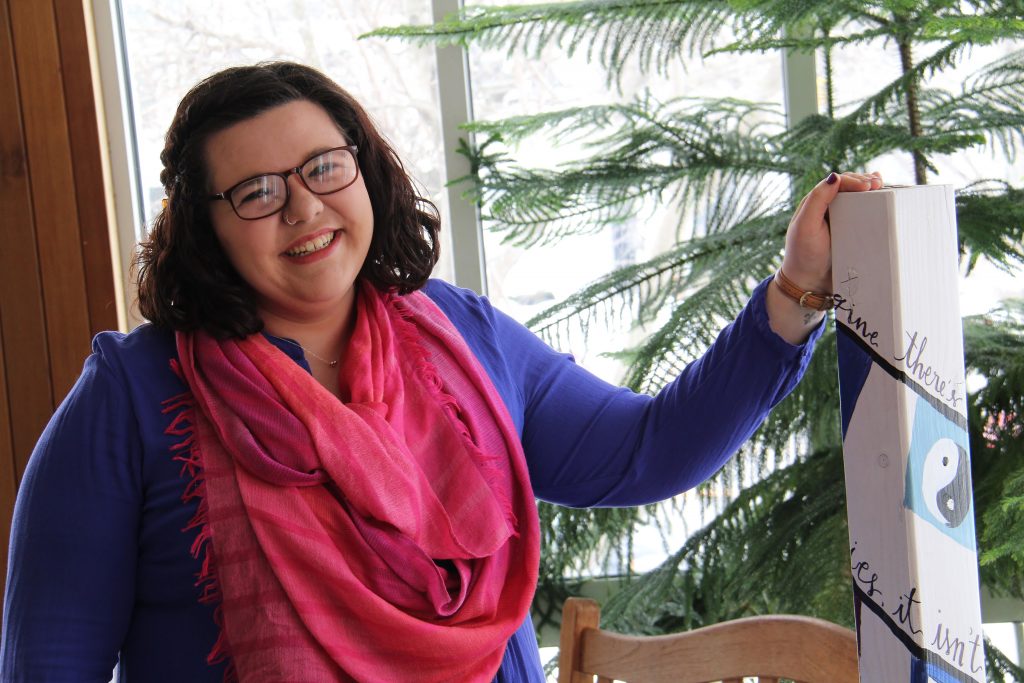 When Maria Hartz needs a quiet place to be herself, she finds sanctuary in the Sanctuary.

Before the Sanctuary opened in 1997, worshippers prayed in a Catholic chapel in Saint Joseph Hall. The Rev. Christopher DeGiovine, a priest and campus chaplain for 25 years, said the College was just starting to draw a good number of students of other faiths.

The region’s rabbis, priests, imams and ministers, he noted, had launched a dialogue that would become nationally known. And Saint Rose President Louis Vaccaro wished to create an interfaith gathering place in the center of campus.

DeGiovine surveyed students, who unambiguously said they wanted a sacred space that reflected all faiths, honored the College’s Catholic heritage and provided room for quiet reflection. He wondered if this could be achieved in a small building along a busy city street. Then, he found an architect, James Hundt, who came up with a design that supported each goal. The cost was estimated at $1.5 million.

“I had never even raised $10,” joked DeGiovine. “But the students were getting very excited. And I was told if I was excited, people would give money.” 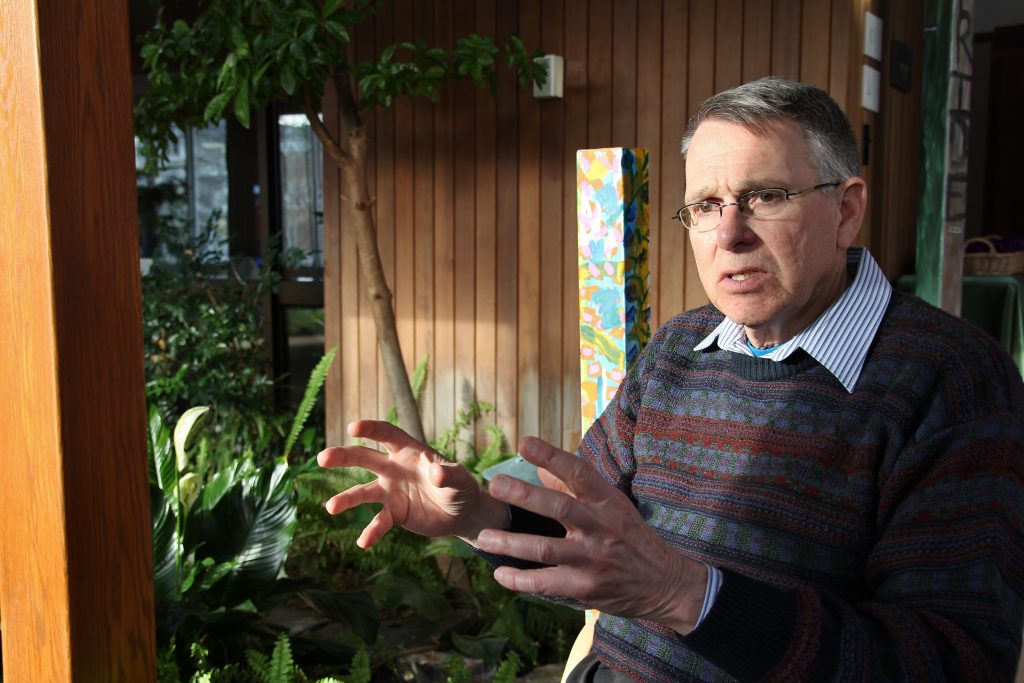 Fr. Chris DeGiovine had never raised money before taking on the task to fund the Sanctuary.

The project gained momentum as Beatrice and Sidney Albert and Frank and Josephine (Schillaci ’50) Farinella contributed $250,000 each. Construction began in 1995 and took a year. The College’s new president, R. Mark Sullivan, with broad community support, suggested naming the Sanctuary for The Most Rev.Howard J. Hubbard, the bishop of the Roman Catholic Diocese of Albany who was known for building bridges between religions.

From nearly the day the Sanctuary opened its doors, the impact was apparent.

“A Muslim student just arriving in Albany who had a big academic load and felt she was alone came in and said ‘Can you tell me where I can pray to Mecca?”’ recalled DeGiovine, during a recent visit to the space he helped steer to fruition.  “When I showed her that she could do that here, she started to cry. I was sure we had built something very special.”

September 11, 2001, left no doubt of the Sanctuary’s position and importance to the students.  The Student Affairs and Spiritual Life offices planned a candlelight vigil there the next night to enable students to express their grief and offer their prayers to those who perished or had their lives touched by the tragedy.  So many students came out that the vigil had to be moved outside onto the Campus Green.

Clearly, students needed a place to go.  The Sanctuary provided it. 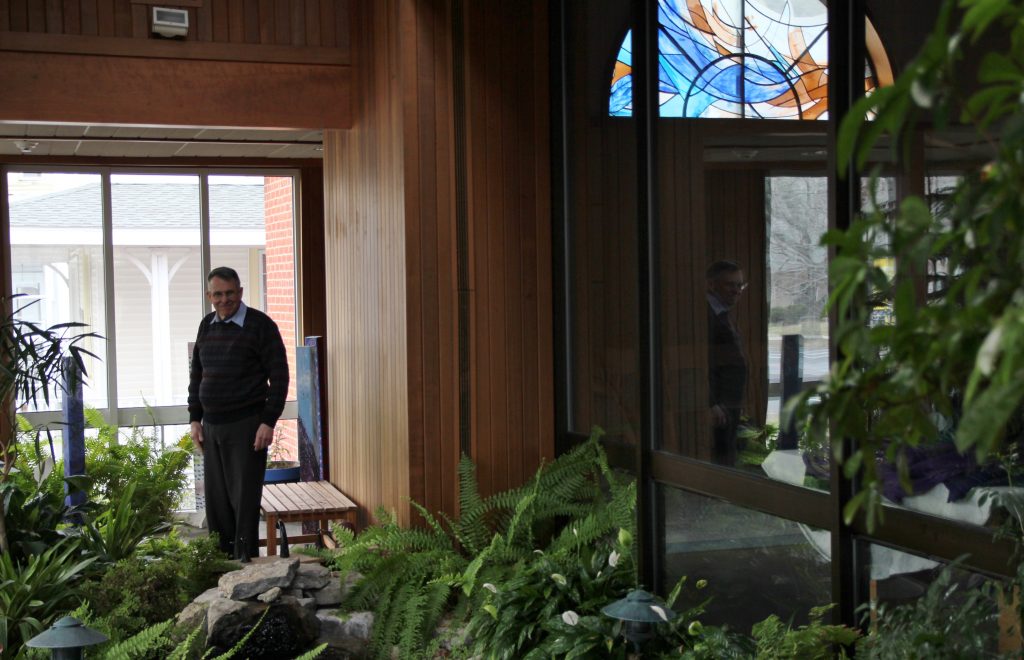 Fr. Chris pauses in the Sanctuary garden during a recent visit to the College.

This spring the Sanctuary has marked its 20th anniversary with a birthday party, an art show and a visit to a local mosque.

Students and staff also continued the usual activities, such as planning service trips to Guatemala and New Orleans and holding meetings of Better Together, an organization devoted to discussion among students of different faiths. The annual Sidney and Beatrice Albert Interfaith Lecture took up interfaith relations before and after Vatican II.  Students took part in the annual ethics roundtable.

In its path, the Sanctuary has built up programs and clubs that contribute a distinct identity to campus. A yoga class offered occasionally, for instance, was so well-attended it became a weekly offering. Not one but two gospel choirs now rehearse there. The Sanctuary has contributed to the evolution of the College’s signature service program, Reach Out Saint Rose, a day in which more than 900 students assist 50 local service agencies.

“The building created a new, broader understanding of what we are as a community,” noted Joan Horgan, director of campus ministry, whose office off a cozy gathering space in the lower level is a hub for students. “By virtue of there being a building, we need to live up to its purpose. It is a place of worship for people of different backgrounds and a place for students to feel welcome.”

Under direction of the College’s Office of Spiritual Life, the space that is a second home to scores of Saint Rose students also bears witness to their spiritual journeys.

Often, they come to take part in a program or event only to find themselves examining their beliefs. Sister Sean Peters, CSJ, who works on the Spiritual Life staff, sees this trend increasing.

“I think 20 years ago students who are Methodist would stay Methodist, those who are Catholic or any other religion would stay with their religion,” said Peters, who works on service programs and activities that integrate the College’s mission.

“Today,” she added, “they want to know ‘What else is there? What do other people believe?’ At the Sanctuary we provide the space and the programming to say ‘It’s okay to ask those questions.’” 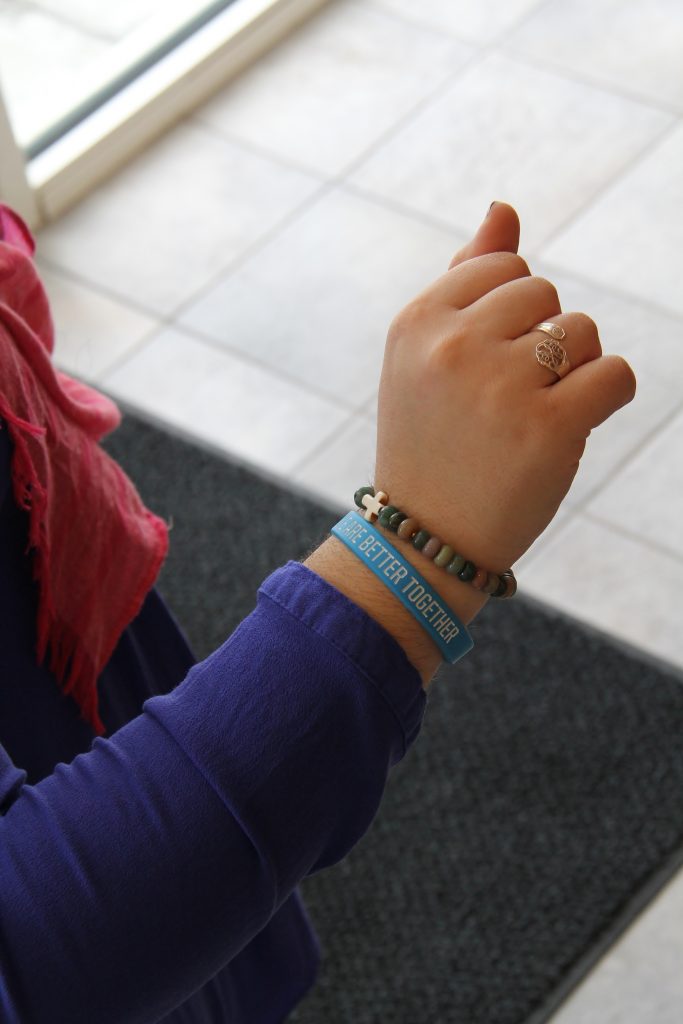 Scroll down for photos from the Sanctuary’s 20th anniversary programs. 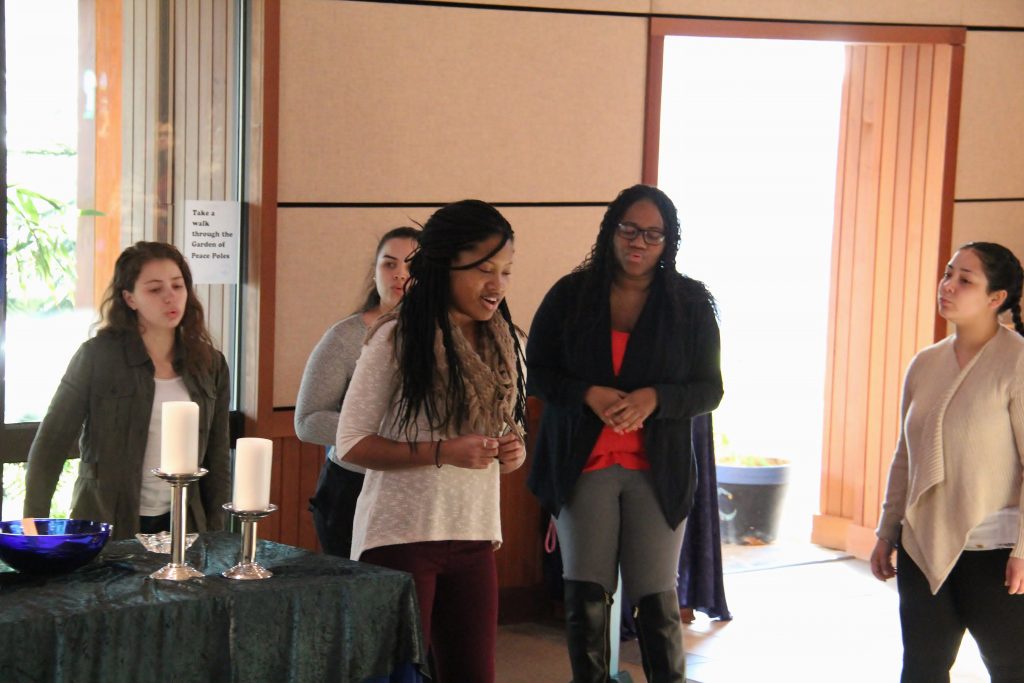 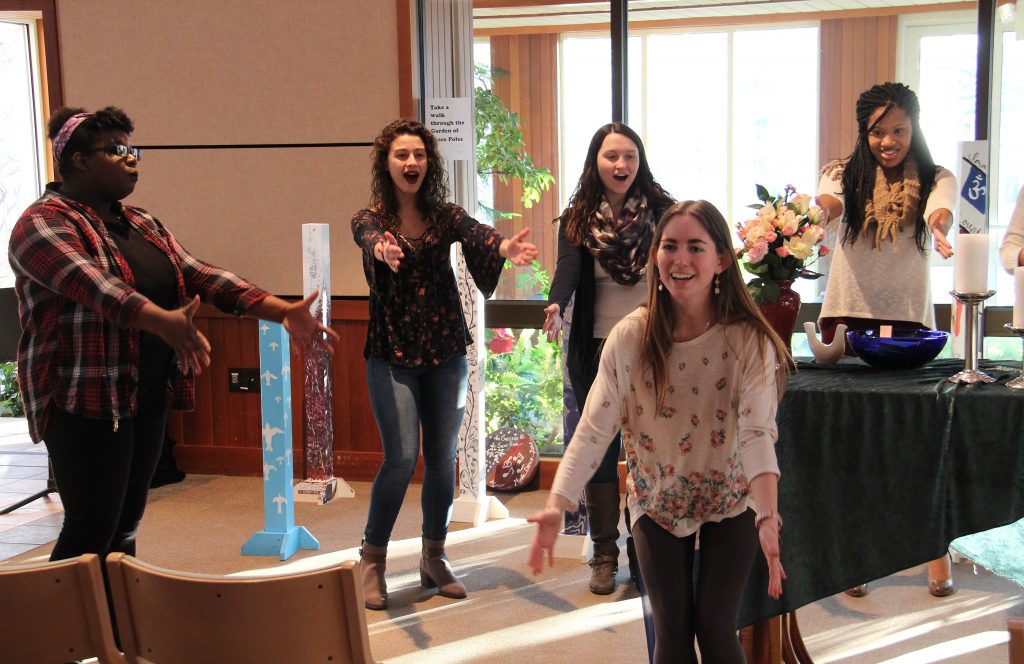 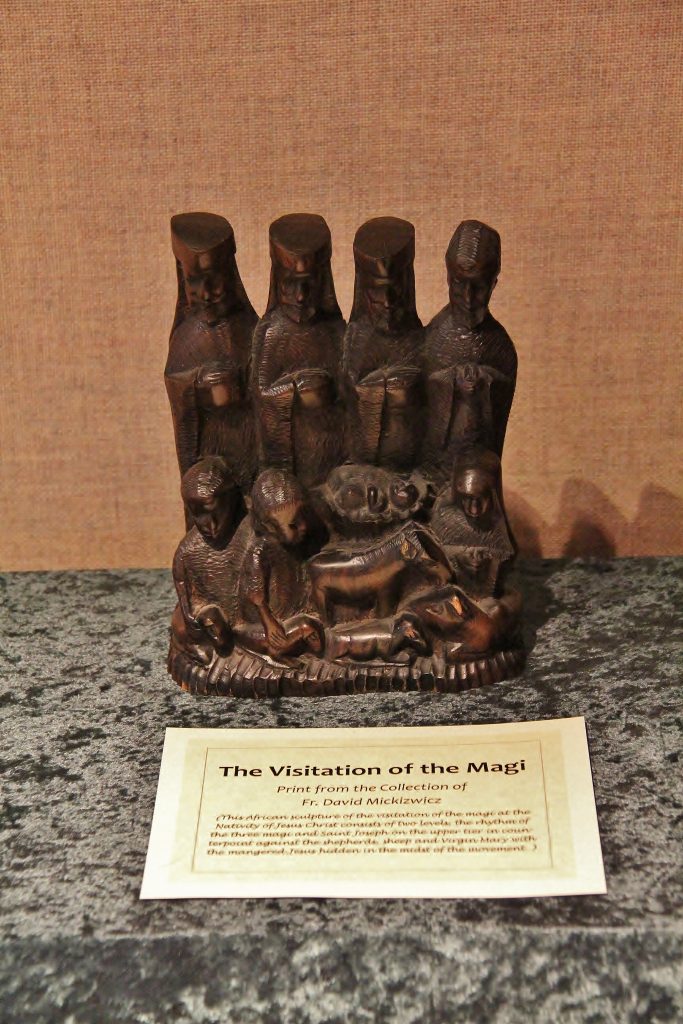 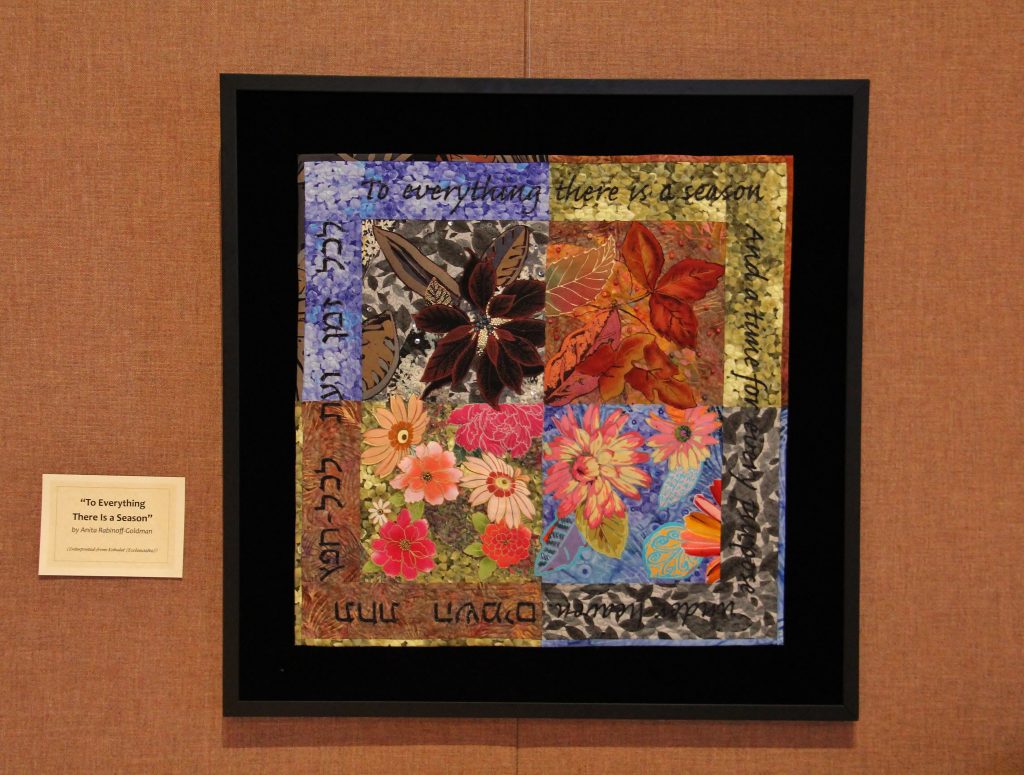 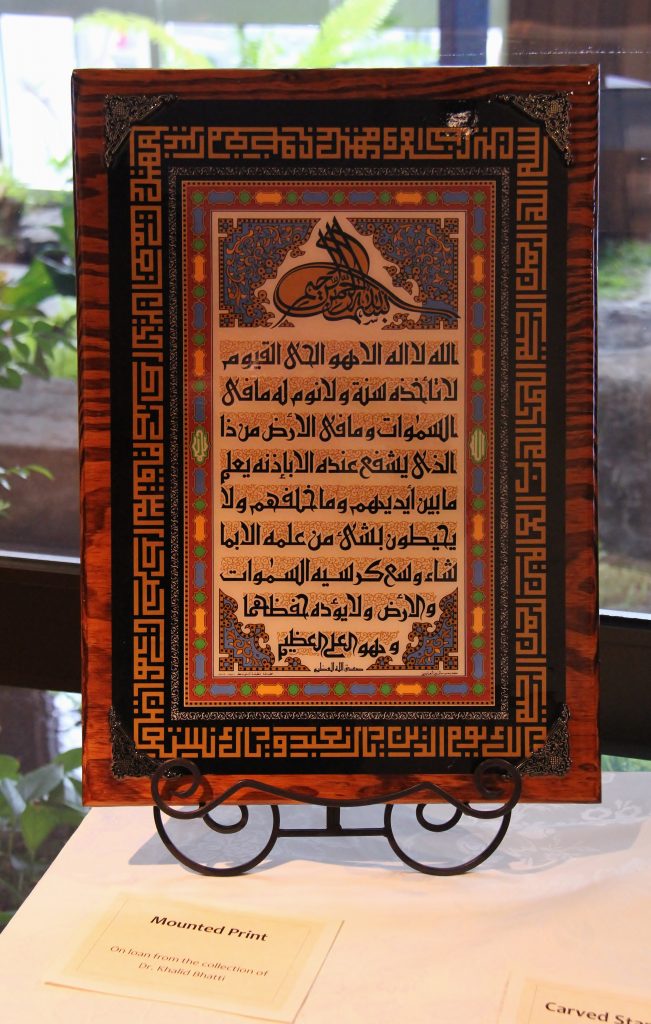 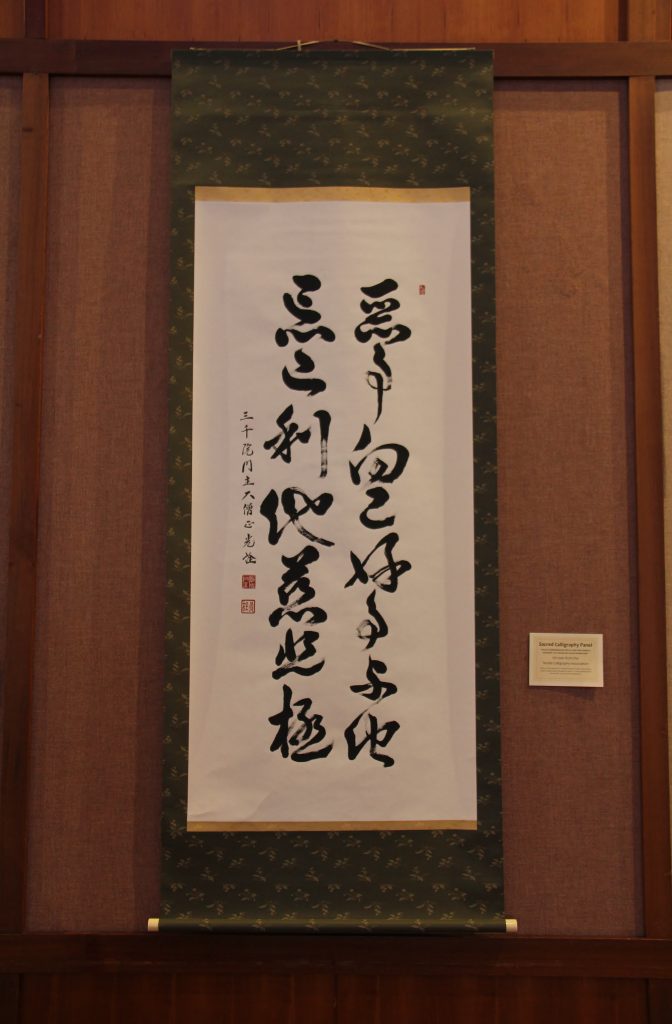 A re-dedication ceremony preceded the Sidney and Beatrice Albert Interfaith Lecture panel on interfaith relations before and after Vatican II. 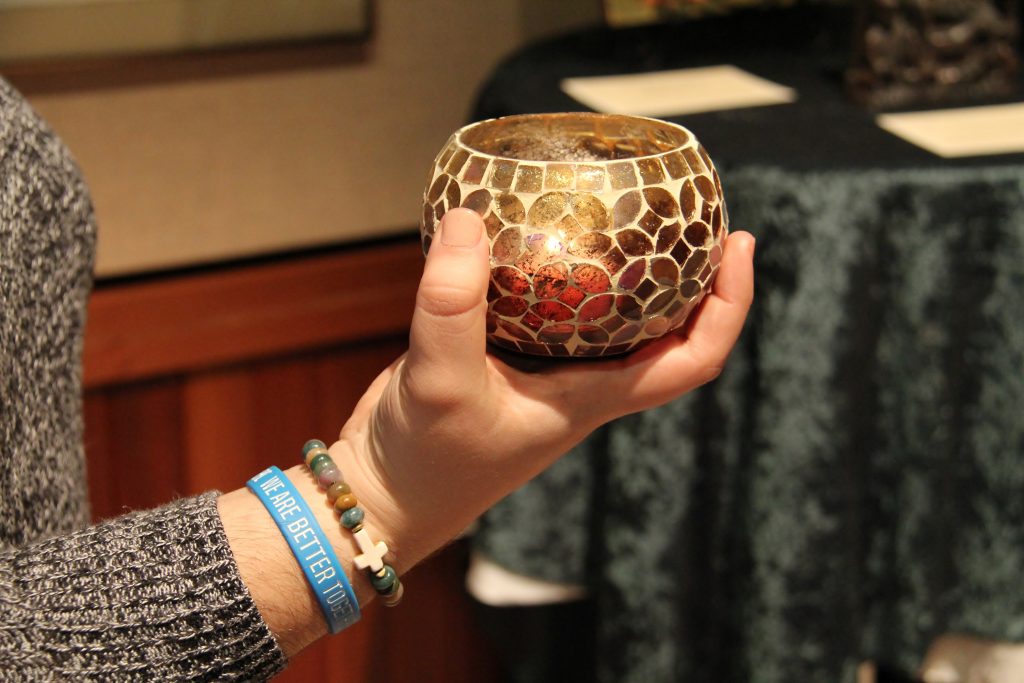 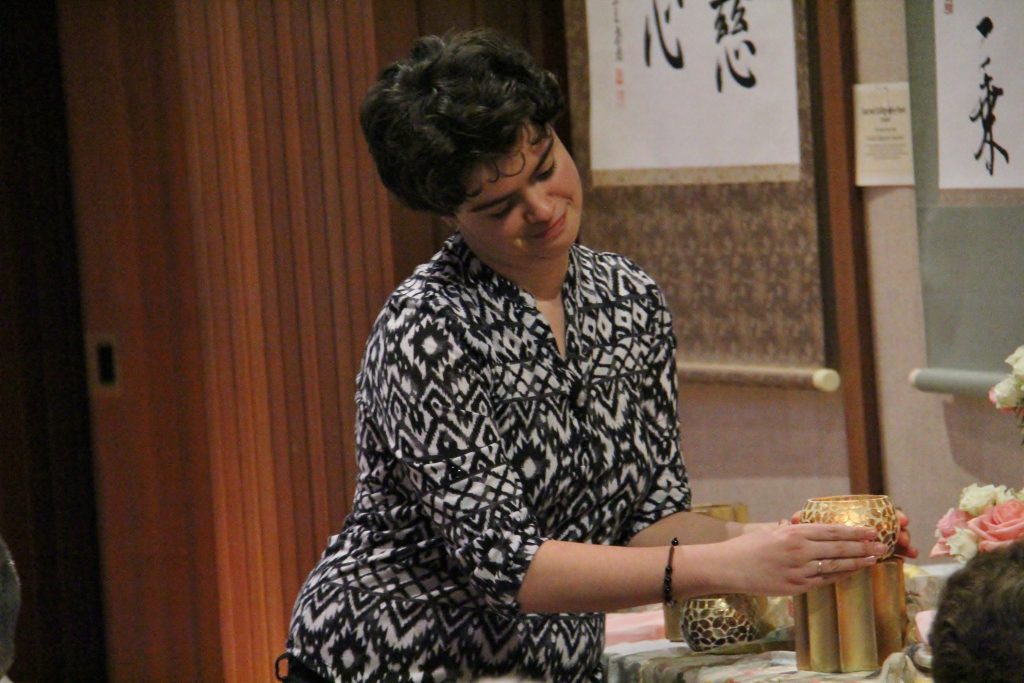 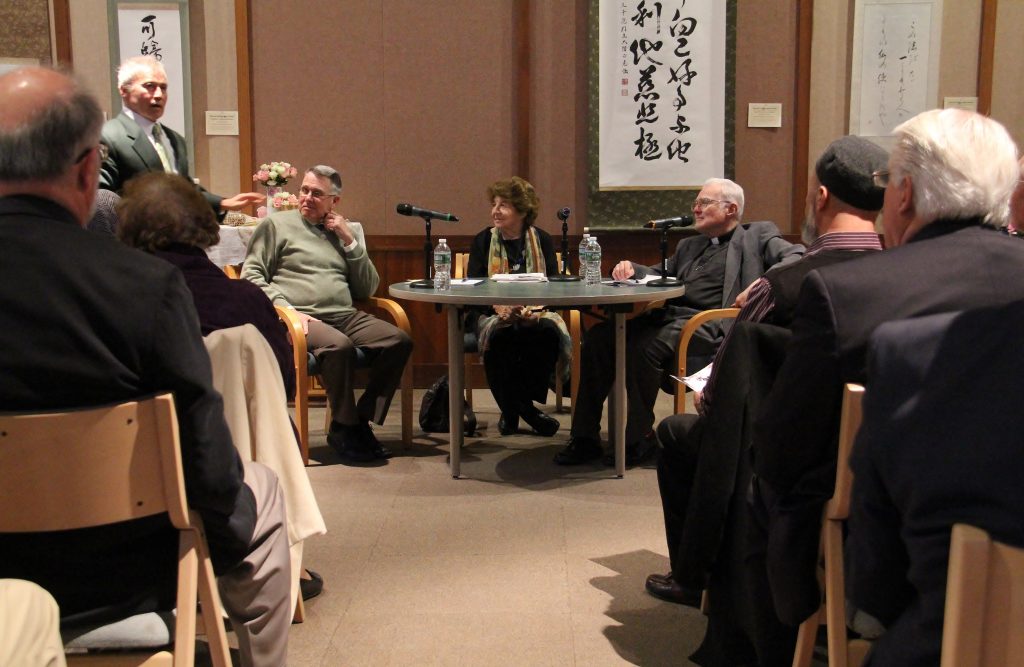