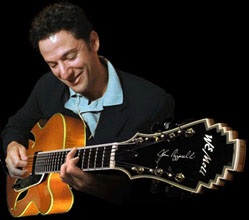 ALBANY (March 22, 2017) — John Pizzarelli has been called “Hip with a wink” by Town & Country, “madly creative” by the Los Angeles Times and “the genial genius of the guitar” by The Toronto Star.  After his smash success with the Boston Pops, he was hailed by The Boston Globe for “reinvigorating the Great American Songbook and re-popularizing jazz.”

In performances with his wife, singer/actress Jessica Molaskey, and his father, guitar legend Bucky Pizzarelli, the three have been labeled “the First Family of Cool” (San Francisco Chronicle) and “the von Trapps on martinis” (The New Yorker).

The College of Saint Rose presents An Evening with The John Pizzarelli Quartet on Friday, April 21, at 7:30 p.m. on the D’Arcy-Brady Stage in the Kathleen McManus Picotte Recital Hall, Massry Center for the Arts, 1002 Madison Ave., Albany, New York.

A limited number of seats are still available.  Tickets are $30 general, $20 for students and are on sale now at www.massrycenter.org.  For concert and ticket information, phone the Massry Center ticket office at 518-337-4871 or e-mail concerts@strose.edu.

Pizzarelli has established himself as one of the prime interpreters of the Great American Songbook and beyond.  Using performers such as Nat “King” Cole, Frank Sinatra and João Gilberto and the songs of composers from Richard Rodgers and George Gershwin to James Taylor, Antonio Carlos Jobim and Lennon and McCartney as touchstones, he brings to their works the cool jazz flavor of his brilliant guitar playing and singing.

Pizzarelli started playing guitar at age 6, following in the tradition of his father, the legendary Bucky Pizzarelli. After playing in pickup groups and garage bands through high school, he began exploring jazz as a teenager with his father and was able to perform with a number of great jazz musicians who would be a major influence on his work, including Benny Goodman, Les Paul, Zoot Sims, Clark Terry and Slam Stewart.  Pizzarelli went out on his own after recording My Blue Heaven (Chesky Records) in 1990, then toured extensively, playing clubs and concert halls, opening for such greats as Dave Brubeck, Ramsey Lewis and Rosemary Clooney.  Since then, Pizzarelli has recorded more than two dozen CDs, including the 2008 GRAMMY®-nominated With a Song In My Heart.

In the 1990s, a widely seen TV commercial for Foxwoods Casino in Connecticut made Pizzarelli recognizable to millions.  In 1993, he was honored to open for Frank Sinatra’s international tour and then joined in the celebration for his 80th birthday at Carnegie Hall, bringing down the house singing “I Don’t Know Why I Love You Like I Do” with his father accompanying him.  Pizzarelli made his Broadway debut in the musical Dream, a revue of Johnny Mercer songs, in 1997.

Pizzarelli’s latest album, Midnight McCartney, has its origins in Sir Paul McCartney’s GRAMMY®-winning 2012 album, Kisses on the Bottom.  Pizzarelli played guitar on 10 of the McCartney album’s 14 tracks and backed Sir Paul at an iTunes concert at Capitol Records Studios, the GRAMMY® Awards and the Recording Academy’s annual MusiCares Person of the Year Gala.

In addition to being a bandleader and solo performer, Pizzarelli has been a special guest on recordings for major pop names, such as James Taylor, Natalie Cole, Kristin Chenoweth, Tom Wopat, Rickie Lee Jones and Dave Von Ronk, as well as leading jazz artists like Rosemary Clooney, Ruby Braff, Johnny Frigo, Buddy DeFranco, Harry Allen and, of course, his father Bucky. He was featured opposite Donna Summer, Jon Secada and Roberta Flack on the GRAMMY®-winning CD Songs from the Neighborhood: The Music of Mr. Rogers in 2005.  In 2009, Pizzarelli received the Ella Fitzgerald Award from the Montreal International Jazz Festival, joining a select group of past winners that includes Aretha Franklin, Tony Bennett and Harry Connick Jr.

Pizzarelli performs annual engagements at New York’s Café Carlyle with his wife, singer/actress Jessica Molaskey, and at Birdland with his jazz combo.  He continues to tour throughout the United States, Europe, South America and Japan, performing classic pop, jazz and swing while setting the standard for stylish modern jazz.