ALBANY (February 2, 2017) — In February 2015, music industry students at The College of Saint Rose launched Rose Record Label Group, with a mission to provide fresh ideas, opportunities and experiences to a diverse group of artists and fans alike.  Rose Records promotes original music by creating and collaborating through the innovations of rising talent.  One year later, Rose Record Label Group marked the official release of its first album, “Rose Roots Vol. I,” which can be found on iTunes, Google Play and Spotify. 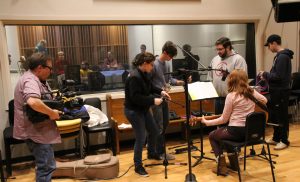 Now this unique student-run program has been profiled on WMHT, the Capital Region’s PBS television station.  The station’s February 1, 2017, “AHA! A House for Arts” included a segment on Rose Record Label Group as an example of how students are learning and changing the music industry “from the ground up.”