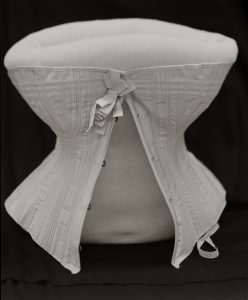 A gallery reception will be held Friday, January 27, from 5 p.m. until 7 p.m.  In addition, the artist will present a talk at 7 p.m. in Saint Joseph Hall Auditorium, 985 Madison Ave., Albany, New York.

Marcuse investigates what remains, what is saved and what is lost, both in nature and culture. Phantom Bodies presents 66 platinum and pigment prints, haunting photographs that bring together two seminal projects: “Undergarments and Armor” (2002–2004) and “Wax Bodies” (2006–2008). Both probe unsettling tensions between absence and presence, body and image, past and present.

“Undergarments and Armor” is a culmination of the artist’s travels to archives and museums across the United States and England with the support of a Guggenheim Fellowship. The suite of prints includes images of breastplates, helmets, corsets, bustles, mannequins and dress forms. “Undergarments and Armor” draws together and questions opposing categories – underwear/armor, male/female, hard/soft, armed/disarmed. In these photographs, garments and suits of armor are portrayed as sculptures of the body, carapaces that have outlasted their wearers. Their original purpose was to adorn, constrict and protect the body. Long removed from practical use, they are archived as artifacts, shells of their inhabitants. 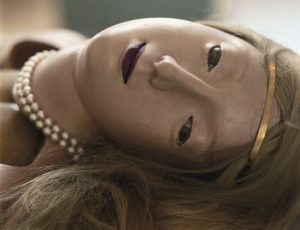 “Wax Bodies” presents haunting images of 18th– century wax anatomical models found in two little-known museum collections. La Specola, The Royal Museum of Physics and Natural History in Florence, Italy, was established at the height of the Enlightenment. The so-called “Phantom Bodies” were created to teach new scientific knowledge of the body, anatomy, childbirth and disease. The artist also photographed the collection of models at the Josephinum in Vienna (once the Military Surgical-Medical Academy in the 1780s). These Viennese models were made in Florence at La Specola. The two collections are, in theory, identical. Yet, the differences between them are intriguing: the Italian women have olive complexions and lush brown hair, while the Viennese are pale, blue-eyed and blond and wear golden circlets. In “Wax Bodies,” Marcuse came to see the medium of photography as an analogue to Enlightenment concepts of seeing and understanding the world. Both have the look of truth, with a stranger fiction not far beneath the surface.

Marcuse (www.tanyamarcuse.com) received a master of fine arts degree from Yale University and was awarded a Guggenheim Fellowship for her project “Undergarments and Armor.” Marcuse’s photographs are held in numerous museum collections including the Corcoran Museum of Art, Library of Congress, San Francisco Museum of Modern Art, George Eastman House, The Metropolitan Museum of Art, Yale University Art Gallery and Beinecke Rare Book and Manuscript Library at Yale. Exhibitions include the International Center for Photography in New York; Deutsches Hygiene-Museum in Dresden, Germany; Thyssen-Bornemisza Museum in Madrid; and the Museum of the Fashion Institute of Technology in New York. Her work has been reviewed in numerous publications including The New Yorker, Cabinet Magazine, New York Magazine, Artforum, Artnews, The Wall Street Journal and The New York Times. The artist has published three books with Nazraeli Press: Undergarments and Armor (2005), Fruitless (2007) and Wax Bodies (2012). The artist is represented by Julie Saul Gallery, New York, and teaches photography at Bard College.

For more information about the exhibition, visit www.strose.edu/gallery or contact Jeanne Flanagan, gallery director and curator, at 518-485-3902 or flanagaj@strose.edu.