November 21, 2016 — Without meaning to, last semester the Saint Rose Wind Ensemble auditioned for one of the most prominent gigs in the state.

“I got the CDs from our recent concerts and listened and chose what I thought were the best of our best and submitted them,” explained Dr. Robert Hansbrough, the professor of music who directs the ensemble. “You weren’t allowed to change a thing.”

The unvarnished performances – Harrison’s Dream by Peter Graham, A La Battaglia by Heinrich Isaac and Selections from Turandot by Giacomo Puccini – wowed the judges who choose the bands, orchestras, ensembles or choral groups that perform during the winter conference of the New York State School Music Association (NYSSMA).

They chose Saint Rose. As a result, the 45-member troupe will be one of just six in the state, and just two student instrumental groups, invited to showcase their talents during the NYSSMA meeting’s designated “Concert Hours.”

“The magnitude of this accomplishment cannot be overstated,” said Dr. Leroy Bynum, dean of the College’s School of Arts & Humanities. “Our Wind Ensemble was chosen by the NYSSMA Selection Committee via a ‘blind’ hearing of dozens of audition recordings from colleges and universities. We are extremely proud.” 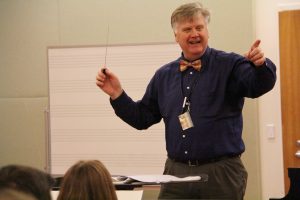 The Saint Rose Wind Ensemble will open the last day of the three-day meeting, December 2, at 9:30 a.m. The meeting, the preeminent gathering of New York student musicians and high school and college music educators, is held at the Rochester Convention Center. Hansbrough expects a knowledgeable audience from among the 14,000 or so students, parents, teachers and professors who will attend.

The performance continues the College’s strong showing at NYSSMA. Three years ago, the Saint Rose Masterworks Chorale, which Professor Michael Lister directs, also was selected for the rare honor. It was the College’s first Concert Hour appearance.

Hansbrough compared the achievement to a sports team making the playoffs – but this team isn’t competing only against others in the same sport. It competes alongside orchestras, jazz ensembles and choirs from colleges of all sizes and classifications.

“Not only that, but we are the only college ensemble selected to perform during the Concert Hour at the entire conference,” Hansbrough said.

He said he does not apply for a NYSSMA spot every year because preparing and performing are so taxing on students, who have a number of commitments.

The group is busy preparing three works: Grand Canyon Fanfare, the rousing piece by James Newton Howard played in the final climatic scene of the movie by that name; Nocturne Number 9 by Alexander Scriabin; and selected movements from Impressionist Prints by Aldo Forte. They also have Henry Filmore’s Rolling Thunder ready should an encore be necessary.

The Wind Ensemble will perform the same pieces the day before at Mendon High School outside of Rochester.

“We also have a chance to show the next generation of prospective Saint Rose students how we do it,” said Hansbrough.