MASSRY CENTER TO SWING WITH THE BUMPER JACKSONS

The College of Saint Rose presents a night of swing and re-imagined American roots music with The Bumper Jacksons in concert.

The Bumper Jacksons with special guests Bryan Brundige and The Piggly Wigglies will perform Friday, September 23, at 7:30 p.m. on the D’Arcy-Brady Stage in the Kathleen McManus Picotte Recital Hall, Massry Center for the Arts, 1002 Madison Ave., Albany, New York.

TICKETS
A presentation of Premiere Performances, tickets are available at $20 general, $10 students and are on sale now at www.massrycenter.org. For concert and ticket information, contact the Massry Center ticket office at 518-337-4871 or e-mail concerts@strose.edu.

ABOUT THE BUMPER JACKSONS
The Bumper Jacksons are hot and sweet, painting America’s story from New Orleans’ brothels to Appalachian hollers. Unafraid to scrape together new sounds from forgotten 78s, The Bumper Jacksons boldly and elegantly balance paying homage to the traditions while fashioning their own unique, do-it-yourself style. Honored at the Washington Area Music Awards as 2015 “Artist of the Year” and “Best Folk Band” from 2013 to 2015, The Bumper Jacksons are playfully creative with their originals and re-imagining roots music with both power and tenderness.
The Bumper Jacksons began in 2012 as a passionately driven project by the band’s two songwriters, Jess Eliot Myhre and Chris Ousley, who shared a common love for the old sounds. Myhre, a New Orleans-inspired clarinetist and vocalist, traded tunes and dance moves with the biblically bearded Ousley, an old-time banjo player and guitarist. The core of The Bumper Jacksons’ sound has matured quickly over these few short years and expanded to include Dave Hadley (pedal steel), Alex Lacquement (upright bass, vocals), Dan Samuels (drum kit, suitcase) and Brian Priebe (trombone). The success of the band’s last two albums, Too Big World (2015) and Sweet Mama, Sweet Daddy Come In (2014) demonstrate the ongoing refinement of their rich and rustic sound that explores a full spectrum of human emotion in its goal for the caramel core of Americana.
Bursting at the seams with some of the richest threads of old America, The Bumper Jacksons brings the audience into the center of a party where everyone’s invited and the dance floor never sleeps.

ABOUT BRYAN BRUNDIGE AND THE PIGGLY WIGGLIES 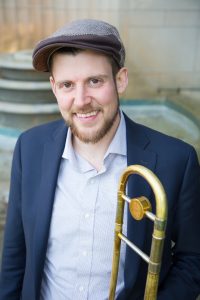 Bryan Brundige and The Piggly Wigglies formed in 2015 with the mission of getting people’s feet movin’ and groovin’. The band touches upon classics and not-so classics from the early 1900s to the 1940s. The Piggly Wigglies focus primarily on the swing dance community and have played dances in Boston, Kingston, Albany, Rochester and Montreal. The group plays vocally driven swing and blues, with a focus on vocal harmonies, that are reminiscent of the Mills Brothers, the Andrews Sisters, Louis Jordan, Cab Calloway, Louis Armstrong and Hoagy Carmichael.