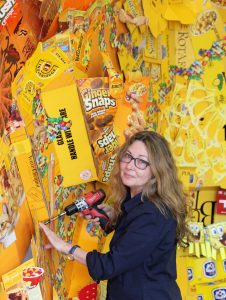 The exhibit opens Friday, October 7, from 5 p.m. to 9 p.m. and continues through Sunday, December 4, at the Esther Massry Gallery, Massry Center for the Arts, 1002 Madison Ave., Albany, New York. Gallery hours are: Monday–Saturday noon–5 p.m., Wednesday–Thursday noon–8 p.m., closed Sunday except December 4. The gallery will be open for 1st Fridays, October 7, November 4 and December 2, from 5 p.m. until 9 p.m. and closed November 23–27 for Thanksgiving.

A gallery reception will be held Friday, October 21, from 5 p.m. until 7 p.m. The artist will present a talk at 7 p.m. in Saint Joseph Hall Auditorium, 985 Madison Ave., Albany, New York.

In addition, a special ARTWAVES program presents a collaborative event with students in the College’s music industry program under the direction of Sister Mary Anne Nelson, CSJ, in response to the exhibition Friday, November 4, at 7 p.m. in the Esther Massry Gallery. A light reception will follow.

All gallery events are free and open to the public.

Quirky, intensely colored sculptures, giant wall murals and small collages are made from cast-off, familiar packaging reclaimed from our mass-produced, consumerist culture. Formerly trash bin detritus, these intricate and labor-intensive creations add gravitas to an ethos of excess and waste. The exhibition features a large-scale, suspended sculpture constructed in the vertical gallery. 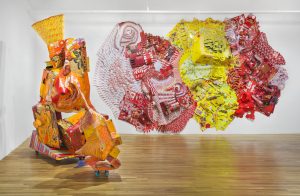 Nancy Princenthal, writer, critic and contributing editor of Art in America, states “The ready-made graphics of her materials are meant by their commercial producers to be seductive, and Hoke only bumps up their appeal, organizing them into tapering cones, telescoping cups, fanned plates and pinwheeling spirals of the most dizzying allure.” (Excerpted from 2015 essay on Lisa Hoke’s exhibition “Attention Shoppers,” published by Pavel Zoubok Gallery, New York.)

Hoke is the recipient of a Joan Mitchell Foundation Grant and the Edwin Austin Abbey Fellowship from the National Academy Museum in New York. Hoke’s work is in the public collections of the Whitney Museum of American Art, Johnson Museum of Art, Cornell University, Oklahoma City Museum of Art, New Orleans Museum, Orlando Museum in Florida and D’Amour Museum of Fine Arts in Springfield, Massachusetts, among others. In spring 2017, Hoke will create a work in the lobby of the Memphis Brooks Museum of Art, Memphis, Tennessee.

Hoke (www.lisahoke.com) lives and works in New York City. She is represented by the Pavel Zoubok Gallery in New York.

For more information about the exhibition, click here or contact Jeanne Flanagan, gallery director and curator, at 518-485-3902 or flanagaj@strose.edu.