Saint Rose Took Priscilla Ly to Romania, a Fulbright Scholarship Is Taking Her Back There 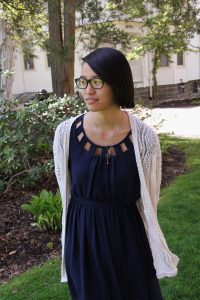 Priscilla Ly is off to Romania as a Fulbright scholar, selected for her academic merit and leadership ability to engage in international dialogue.

September 13, 2016 — As a Saint Rose student, Priscilla Ly helped organize a conference on human rights and a student semi-formal dance. She headed the Student Events Board and the Philosophy Club, co-chaired “Social Justice Week,” moderated the Student Ethics Forum and worked with the Office of Spiritual Life. She shaved her head for a fundraiser benefiting children with cancer and cooked mac-‘n’-cheese for a fundraiser helping the region’s homeless.

Ly says her interest is always the same. She wants to know people, with special sensitivity toward those who are overlooked. “I don’t know how to absent myself from the world,” she notes.

In October, she returns to Romania for the year, this time as a Fulbright scholar, selected for her academic merit and leadership ability to engage in international dialogue. Ly will be an English teaching assistant at Alexander Ioan Cuza University, the country’s oldest higher education institution.

She first visited Romania as a Saint Rose junior on a tour led by Richard Pulice, a professor of social work who studies approaches to mental illness and homelessness. “Seven days wasn’t enough,” she says of the experience.

Here, Ly speaks about the impact of Saint Rose, a man named Reggie and the nagging feeling that she should speak Romanian:

On lending a hand: In high school I did a lot of donation drives. I ended up volunteering with a house (for families in crisis) and learning to be with people who are suffering.

On Saint Rose classes that clicked: I am really grateful for my first class, on a Monday at 10:25 in Albertus 401. It was “Ethics and Values” with Dr. (Michael) Brannigan. I felt very at home having conversations about our place in society.

In creative writing you had to workshop every piece. You had to say to folks right off the bat, “This is what I’m doing, and how do you feel about it?”

On spring break in San Francisco: We worked with GLIDE, an organization in the Tenderloin district, serving meals to folks who come looking for a place to stay. You’d see folks one year and go back and see folks you recognized the next year. It was really sad in a lot of ways.

On Katrina vs. Sandy: In New Orleans I felt slightly bitter because six or seven years went by (after Katrina) and why are they just now putting up a firehouse? It felt crazy that things were moving so slowly. Hurricane Sandy had occurred in a different community, and there, things were rebuilt. 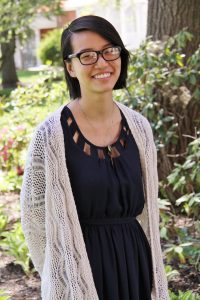 On Reggie: But it’s the year of mercy and I shouldn’t carry this bitter resentment. I should remember people like Reggie.

Reggie had built his house in the Lower Ninth Ward of New Orleans. I remember him staring at a random spot on the ceiling and patting him on the back and saying “What’s up?” and him saying “This is how high the water got,” and thinking “I’m a terrible swimmer and I would never want to be in that situation,” and him talking about Super Bowl parties and family gatherings there, and him looking back at me and saying, “You’re here. You’re helping me bring that back. I’m going to have that again soon.”

On Juneau: It was a Project 70 internship, which comes out of the Alumni Relations office, with the Juneau-Douglas City Museum. I did a lot of archival work and research for visitors. We had great a curator and volunteers in their 70s and 80s who were lifers there.

On Romania: We landed in Bucharest, and after dinner the option was to rest or go out in the van. I had been up 21 hours and thought “Well, I might as well keep going.” We were in and out of the van and didn’t expect someone to say “We’re going underground.” There used to be bathrooms and they were shut down and I’m thinking “Why would you shut down a bathroom?” We came to a dark area where people were sleeping. It felt really surreal. This is the reality they wake up to every day and go to sleep with every night.

On the Netherlands: I’m glad we went there second instead of first. They have systems and organizations. If they talked about prison in Holland it was the “forensic system.” They addressed things very differently and in a lot of ways very well.

On Uganda: Dr. Pulice sent an email after we came back (from Romania and the Netherlands) and said “We’re looking at Africa. How does that feel?” I got my immunizations and hopped on a plane with them. It was 11 days, a lot of traveling on unmarked roads. We focused on looking at mental health organizations.

On Romania, redux: I was naïve to think that I would be fine without learning a few basic phrases in Romanian before going. Since coming back, I have sought to learn Romanian through books and online. A Fulbright experience will allow me to have opportunities to converse with more individuals. Learning the language will allow me to better understand what my English language students are feeling.

A goal of mine is to create an outlet for people to share their stories, in order to promote thought on how one makes meaning when it comes to the written and oral interpretations of language.