“My ultimate goal is to find a job where I can speak up and defend my community and individuals who are often marginalized and disenfranchised.” – Guadalupe Chavez ’16

At Saint Rose, Guadalupe has taken advantage of almost every opportunity before her, on and off campus. She was a member of Phi Alpha Theta (the history national honor society,) Phi Sigma Tau (the international honor society) and Epsilon Delta Iota (the academic honor society). She used a Saint Rose summer research grant to pursue an in-depth study of controversial immigration policies and presented her research at a conference. Guadalupe’s paper on the topic will be published in the College’s highly selective Journal of Undergraduate Research. 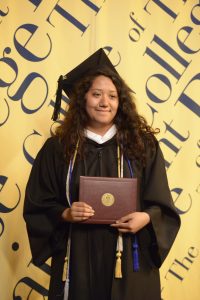 Guadalupe Chavez received her bachelor’s degree at the College’s 93rd Annual Commencement on May 14, 2016.

Guadalupe spent a semester studying in Florence, interned with the Center of Law and Justice in Albany, took part in service trips to homeless shelters in Washington and worked with immigrants near her home in Brooklyn. She won the service award from the history and political science department two years in a row.

And she spent her final semester as an intern with the Congressional Hispanic Caucus Institute in Washington – one of 22 interns selected from among 5,000 applicants.

Here, she reflects on her cultural identity, her inspiring professors and the trouble with asking “papers, please.”

On appreciating where she came from …
As a first-generation college student, going away from home to a completely different atmosphere with different people, especially as a Latina, made me embrace who I am. I wanted to really represent my culture and look at the struggles and issues of the Hispanic population. My professors helped. I don’t think they had a lot of students in the past who brought this perspective to their academics.

On her academic interests…
My culture, experiences and my history/political science professors have influenced my academic interests. I am very interested in public policy, particularly immigration, housing and criminal justice. I am also interested in political theory and critical racial theory. I have incorporated these broad topics into my projects and research papers.

Last summer I had the opportunity of taking part in a summer research project with Dr. (Ryane) Straus from the political science department. I did my research on anti-immigration bills known as “Show Me Your Papers.” Such laws discriminate against undocumented immigrants. They racially profile any individual who looks “foreign” (actual language from the laws). Laws in Arizona let police ask immigrants for their papers when they stop them in their cars.

I went to the Northeastern Political Science Association with Dr. Straus. She presented her research and then I got to present mine. I got a lot out of hearing other people’s academic work at an actual conference. 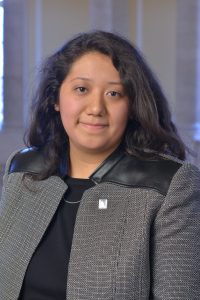 On reaching beyond books and class discussions …
Saint Rose has taught me that we as students have the responsibility to serve communities and individuals that do not have a voice. Saint Rose’s commitment to community service has made me aware of the lack of justice and the lack of equality that continues to exist in the U.S.

On her first taste of public service …
The purpose of the Congressional Hispanic Caucus Institute is to empower and educate the next generation of Latino leaders. I interned for Congresswoman Nydia Velazquez, who represents the 7th District, including Brooklyn, Queens and lower Manhattan. Congresswoman Velazquez is the Democratic ranking member of the Small Business Committee.

My favorite part was preparing for committee hearings. I had the opportunity to write questions. If they liked my question they asked it during hearings.

Women like Congresswoman Velazquez continue to inspire me to become a leader and represent my Latino community.

On prospects for change …
I do not feel less hopeful about getting things done. However, I do believe that there are some serious issues, including the lack of diversity within Congress. There simply are not enough women, Latinos, African Americans or Asian Americans. It’s really difficult to become an active citizen when your representatives do not look like you or cannot relate to your cultural or social experiences.

This experience has motivated me to consider running for political office in the future. I want my bills, laws and policies to incorporate and represent my community rather than marginalizing them.

On what’s next …
I was accepted to The New School. I felt that the qualities of the school, looking at democracy and social justice, are similar to the academics at Saint Rose. That’s one of the reasons I picked that school.

I’m extremely grateful for having amazing, passionate and dedicated professors. I want to especially thank Dr. Straus, Dr. Ledford, Dr. Williams-Searle and Dr. Kannenberg for making me a better critical thinker, a better student and a better person.