April 26, 2016 — Soon after enrolling in an introduction to programming class, then-sophomore Emily Armstrong began to picture herself working in computer science. She also noticed this:

“Some of the people in the class were really confident. They had been programming since middle school and were so far ahead. And the people in that category all happened to be boys,” recalls Armstrong, now a senior who will graduate in May with her bachelor’s degree in computer science and master’s degree in computer information systems. “I could see how the intimidation factor could have scared some people away.” 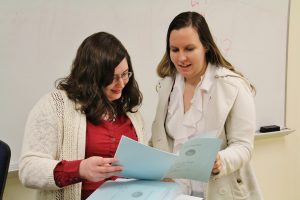 But Armstrong, a straight-A student with a knack for logic problems, was not scared. After graduating with the dual degree, and a minor in music, she will work as a software engineer for Hartford Insurance Group near her family’s home in Connecticut. Hartford Insurance hired Armstrong last summer after she completed a paid internship there, one of three in which she has taken part as a Saint Rose computer science student.

And as Armstrong gains experience, she notices how few women advance to the higher echelons of computing, one of the fastest-growing, best-paying industries and one facing a substantial shortage of qualified workers.

Armstrong’s early observations, in fact, reflect a national reality: women are severely underrepresented in all areas of computer science. That means they are underrepresented in software engineering, information technology, programming, database administration and quality assurance. Just 18 percent of undergraduate computer science degrees nationally were awarded to women in 2013, according to the National Center for Women and Information Technology, a number that has actually dropped in recent decades. In addition, the organization says that just 26 percent of the computer science workforce was female and that, not surprisingly, less than a quarter of chief digital information officers at Fortune 100 companies are women.

The lopsided equation means a woman is less likely to develop the next Facebook or Twitter, less likely to become CIO at a Google or Apple and less likely to earn the salaries these executives and entrepreneurs command.

Not only that, the world loses the influence that millions of women might exert. 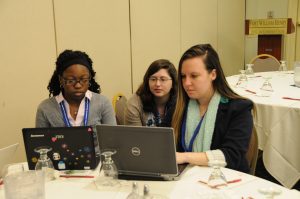 “The big thing is, and there are studies to back this up, female computer scientists often think differently in the way we try to solve problems,” said Dr. Kim Gero, who is completing her first year as a Saint Rose assistant professor of computer science. “When women are missing out, the world is actually missing out in innovation. Many things are probably not being developed.”

A specialist in cybersecurity, Gero has been working to raise the profile of women in her field since her own college days. As both an undergraduate and a graduate student, she presented her research at several conferences for women in computing. While studying for her doctorate at the University at Albany, she started a women-in-computing club and several other initiatives. 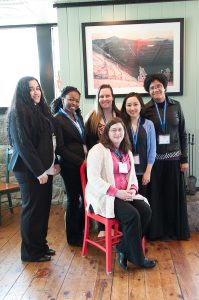 Today, Gero is active in the annual New York Celebration of Women in Computing conference, where she has presented, served on panels and administered the website. And earlier this month, she brought five female Saint Rose computer science students, including Armstrong, to the two-day conference in Lake George. There, they heard addresses by female industry leaders and attended sessions on interviewing, including how much technical information it is prudent to provide. Women, including Gero, led workshops on hot new topics like cybersecurity and Git. There also was discussion of “imposter syndrome,” the feeling too many women have that they don’t really belong.

“And women are less likely to apply for jobs because they don’t have some of the qualifications that are listed,” noted Gero. “But men largely feel free to apply and take their chances.”

Like Armstrong, Gero got her first taste of her industry’s gender imbalance during college. And like Armstrong, she did not blink.

After college, she earned her master’s and doctoral degrees in computer science from UAlbany. Then, as a research intern at the Naval Research Lab in Washington, Gero worked on cryptographic protocol analysis. She continues to work in this area and on computational logic.

Armstrong concurs. She said she was encouraged to take part in sports, art and music as the boys in her classes joined the robotics team and rushed home to log in to their video games.

“Then too, all the advertising of technology has been marketed at men. Look at video games,” noted Armstrong, who loves building web applications and learning about constantly evolving technologies. “It would have been great if someone had encouraged more people like me to become interested sooner.”