Gabriel Pellino, a Saint Rose music student who has played the cello since age 9, spent a year practicing the first movement of Schumann’s Cello Concerto in A Minor to prepare for the College’s annual concerto competition. To do well, Pellino needed, of course, to master the notes and he needed to capture the brooding quality of the 12-minute movement.

But the student felt he also needed to study the composer. He wondered about the sad feeling of the piece and looked for clues into why Schumann introduced themes he never returned to.

“Any piece a composer writes, it’s their legacy, and part of your responsibility when you play it is to try to see what they intended,” noted Pellino, a senior majoring in music education. “Schumann was known to be mentally ill. You have to wonder about his state of mind.”

After competing in November 2015, Pellino won the Patricia Brady-Danzig Concerto Competition in the strings category. Amarie King, a flute player, won in the woodwinds category and James Alexander won for voice. 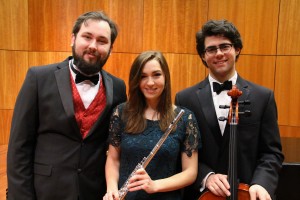 The three students impressed a panel of respected musicians who are not affiliated with the College. The prize: the unusual opportunity to perform as soloists with the Saint Rose Orchestra at its February 20 concert. And as part of that prize, the competitors also get to steer the program.

The orchestra will perform, and Pellino will play the solo from, the somber Schumann movement. James Alexander, a baritone, will sing the solo he prepared, “The Count’s Aria” The Marriage of Figaro, as the orchestra performs.

King, a junior majoring in music, will perform her solo from the challenging Hungarian Pastoral Fantasy for Flute by Franz Doppler.

“I was really nervous going into the competition and I had been preparing since the the spring,” said King, who competed with a particularly complex work by Danish composer Carl Nielsen. “It was a long process and I am so proud I’ll get to play with an orchestra.”

Doing so is something many musicians with many more years of experience never achieve, noted Assistant Professor David Bebe, the orchestra director, who established the competition in 2010. Making a piece of music competition-ready, he explained, requires skills that raise students’ musicianship.

“It’s a challenge like no other performance,” said Bebe, a cellist who has, himself, made it to the finals of several music competitions.  “It’s like running a marathon,” he said. “You don’t necessarily expect to win the marathon, but training prepares you to be a much bigger runner, an elite runner.” 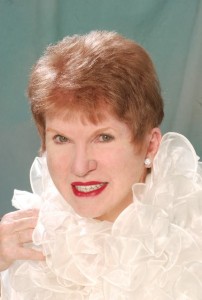 The orchestra director cited another challenge inherent in the competition: paying to rent the music. And this would not have been possible if Patricia Brady-Danzig ’53, G ‘56 a classical soprano and avid supporter of the College’s music program, had not sponsored the competition for the past two years. She, like Bebe, said that most people are not aware of the expense of holding a concerto competition.

A celebrated singer who performs worldwide and has appeared frequently at Saint Rose, Brady-Danzig is eager to see the College music program maintain its high standards. She received an honorary degree from her alma mater in 2001 reflecting her devotion to Saint Rose, the first music major so honored.

“I have collaborated with Dr. Bebe on musical events in the past and have been very impressed by high ideals for the orchestra,” she explained. “Dr. Bebe’s work with the students is outstanding and he has definitely raised the musical level of the college orchestra.”

Bebe explained that Brady-Danzig’s generosity ensures that strong musicianship continues by allowing students to select and perfect work that best showcases their talents and proficiency. Without her assistance they might instead have been limited to work that was affordable to rent for the orchestra.

“A Mozart piece would be in the public domain and not cost anything,” Bebe explained. “But a contemporary, five-minute piece of music might cost up to $600 and you might only be able to get it from a certain publisher, maybe in another country and there might only be 10 copies – and they might only rent it to you for a month.”

Instead, the performers went for the best pieces they could, even if they were really difficult or obscure.

For King, studying the Nielsen composition was so valuable precisely because it is not widely known.

“A classical Mozart piece, everyone knows what that sounds like,” she said. “But what I practiced, it was up to me to figure out how to make it sound.”

James Alexander, a baritone, said that The Marriage of Figaro had called on him to sing an F at the top of the register. 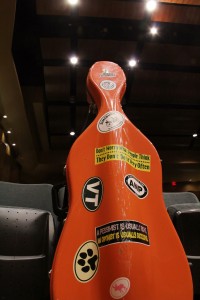 “’The Count’s Aria’ was over seven or eight minutes,” he said. “That is a very long time to sing.”

A junior who transferred to Saint Rose last fall, Alexander has actually performed solos for opera companies in Pittsburgh, Washington and New York City. Nonetheless, appearing before the judges at the Saint Rose competition had been nerve-wracking. To him, that was the point.

“There’s always a nervousness that comes with any performance,” said Alexander, who is majoring in music. “You have to use that energy to push you forward and this was no exception.”