Memoir Touches on How Where We Grow Up Informs Understanding of Class, Gender and Religion

ALBANY (December 16, 2015) — The College of Saint Rose congratulates English Professor Daniel Nester on the release of Shader: 99 Notes on Car Washes, Making Out in Church, Grief, and Other Unlearnable Subjects (99: The Press, 2015), his new memoir that touches on the many ways in which growing up in a particular place informs our understanding of class, gender and religion.

In 2013, Nester’s estranged father died penniless and alone in a small apartment in Tucson. The news brought back a flood of memories about Mike Nester, an enigmatic truck driver with a genius IQ, who influenced Daniel’s worldview with conspiracy theories, philosophy books and something called “The Nester Curse.”

Told in short chapters, Shader is a semi-comic coming-of-age story of a music-obsessed Catholic boy who searches for a new identity outside of Maple Shade, New Jersey, a blue-collar town straight out of a Bruce Springsteen song and where Dr. Martin Luther King Jr. was once thrown out of a bar at gunpoint. The town’s rough-and-tumble inhabitants, called Shaders, don’t suffer record nerds like Nester gladly, and eventually punk rock and poetry save his life.

The book already has garnered positive reviews. The Philadelphia Inquirer writes that Shader “affectingly explores youthful pain without retroactive adult resentments of the sort that can curdle into self-pity.” According to the website Philebrity, Shader’s biggest impact is “how utterly relatable it is.” “Not since Bruce Springsteen has a man so eloquently immortalized and rendered fascinating a subsection of New Jersey while also excavating his own soul,” writes Chronogram.

Daniel Nester is an associate professor of English and creative writing at Saint Rose. Previous books include How to Be Inappropriate (Soft Skull, 2010), God Save My Queen I and II (Soft Skull, 2003 and 2004) and The Incredible Sestina Anthology (Write Bloody, 2014), which he edited. His writing has appeared in The New York Times, The Morning News, The Rumpus, Best American Poetry, Third Rail: The Poetry of Rock and Roll and Now Write! Nonfiction. Nester serves as curator of the Frequency North reading series, which is on hiatus this year. 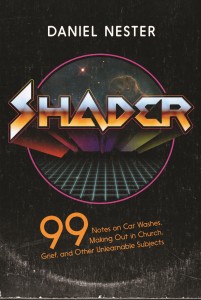 Shader is available for purchase at independent local bookstores and online through Small Press Distribution (www.spdbooks.org), Powell’s Books (www.powells.com) and Amazon. Readings are planned around the Capital Region.

For more information, visit www.shaderbook.com or contact Daniel Nester at 518-454-2812 or nesterd@strose.edu.