ALBANY (November 5, 2015) — Last spring, when music faculty from the University of Szeged in the southern part of Hungary, performed at The College of Saint Rose, faculty and administrators from both schools discussed how the institutions might continue to collaborate.

That effort takes a big step forward this week when Professor Robert Hansbrough visits Szeged, third largest city in Hungary, to teach a master class based on a book he wrote, judge a conducting contest, lead rehearsals and, on Sunday, conduct a concert with the university wind band.

A 17-year member of the Saint Rose faculty, Hansbrough directs the College wind ensemble, the chamber wind group and the faculty Camerata Orchestra.  He recently co-authored a book, Music for Concert Band, published by Meredith Music Publications, devoted to wind band literature. In Budapest he has decided to conduct “Circus Overture” by William Schuman, a work that the Saint Rose Wind Ensemble has performed, and “Concerto for Violin and Winds,” a modern and somewhat flashy violin work by Hungarian composer Hidas Frigyes.

Hansbrough said the University of Szeged awarded him a grant to serve as guest conductor. And he noted that members of the Saint Rose music faculty are frequently invited to contribute their talents as guest artists.

“Any time you’re invited to conduct someone else’s ensemble, it’s quite an honor.  It means there’s a huge amount of respect they perceive toward you and your institution,” said Hansbrough, a conductor and percussionist. “Our faculty have guest posts all the time. They conduct and perform all over the country. This one happens to be out of the country.”

Dr. Leroy Bynum, dean of the College’s School of Arts and Humanities, noted that the University of Szeged is a preeminent music institution in eastern Europe. 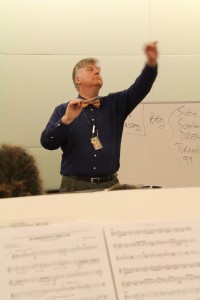 “In Hungary it is the signature institution of music. The best and the brightest attend there,” said the dean, an opera singer who has performed around the world. “This honor speaks volumes about their respect for Professor Hansbrough and his abilities.”

An obvious challenge will be language.  Hansbrough concedes that he cannot read the poster with his name and photo on it, advertising the concert he will conduct.  With help from a translator, hand gestures and a belief in the universal nature of music, he is confident he will have positive experience with the university students.

The role of the conductor, he explained, is to interpret a musical story and communicate it to the musicians and audiences.