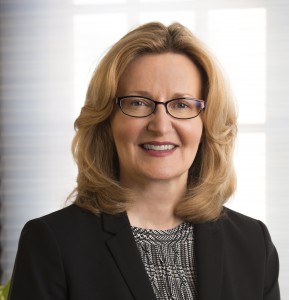 Dr. Carolyn J. Stefanco was formally invested in the Office of the President today in a ceremony on the Saint Rose campus. The inauguration was witnessed by hundreds of Saint Rose faculty, staff, students, alumni, dignitaries and Stefanco’s family and longtime friends.

Stefanco has served as president of the College since July 1, 2014, succeeding Interim President Dr. Margaret Kirwin.

In her inaugural address, Stefanco centered on “courage” rather than “vision,” asserting that vision does not amount to much without courage. Courage, according to Stefanco, is “marshaling our will and sustaining our vision in the face of what frightens us.”

“It takes courage to have new ideas, to embrace change, to re-imagine, to re-invent and to re-found. A vision is just a dream unless we find the courage to implement it,” Stefanco said.

In thanking the Standishes, Stefanco noted, “This is one of the top moments in Saint Rose history, and you are making it possible for Saint Rose to say to the world that reading and analyzing poems, books, plays and essays is critical to living a rich and fulfilling life. By your generosity, you are enabling the College to move forward with incredible momentum and to assume a place on the national stage.”

Stefanco laid out four “pillars” that will serve as the foundation for the College’s future:

• developing Saint Rose into a center for global connection;
• expanding the College’s reputation in fields beyond education and becoming known as a comprehensive university;
• boosting support for first-generation college students to ensure their success;
• creating a culture of innovation in teaching and learning for a 21st century education.

In discussing the needs of first-generation college students, Stefanco reached into her own family history. Neither of her parents, she noted, had attended college when she began her undergraduate career, nor had anyone in her extended family. Stefanco attributed her success to the “many guides and mentors who helped me along my path.”

“Let me assure you, when I first started at a community college, I could not imagine that I would be a college president,” Stefanco said. “We need to be much more intentional about the ways we support the success of all students, and especially our first-generation students. We are a great country because of the democratization of higher education, and we need to embrace the diversity of all students and their families and to provide them with the support required for success.”

Stefanco also took time out to pay tribute to her family, especially her husband, Mac, and daughter, Alexandra, both of whom spoke at the ceremony. She stands as a college president today, she said, because they are her “biggest supporters.”

Stefanco came to Saint Rose from Agnes Scott College in Decatur, Georgia, where she served as chief academic officer and the first of the college’s five vice presidents from 2010 to 2014. During her four-year tenure, she led initiatives that achieved master planning goals, won institutional reaccreditation, increased academic quality and student retention, raised funds from foundations and individuals and fostered the college’s global efforts.

Prior to her service at Agnes Scott, Stefanco held leadership and teaching positions at California State University, Stanislaus, California Polytechnic State University (Cal Poly) and Wheaton College in Massachusetts. At CSU Stanislaus, Stefanco was the founding dean of the new College of Humanities and Social Sciences, overseeing 77 undergraduate and graduate programs. Her tenure at Cal Poly included special assistant to the dean for faculty development, chair of the Department of History and director of the Women’s Studies Program. Stefanco joined the Wheaton faculty in 1986 as an assistant professor of history and served as co-coordinator of the Women’s Studies Program.

Stefanco was a Fulbright Scholar to the University of Zagreb in Croatia and has created programs for student exchange and faculty research in Honduras, Brazil, Portugal and Croatia. She received the 1989 Faculty Appreciation Award for Teaching at Wheaton College, the Richard K. Simon Outstanding Service Award from the College of Liberal Arts at Cal Poly in 2007 and, just last week, the Administrator of the Year award for 2014-2015 from the Student Association of The College of Saint Rose.

**********
The College of Saint Rose (www.strose.edu) is a dynamic, progressive college in the heart of New York’s capital city where teaching is the first priority. With 55 undergraduate programs, nine undergraduate certificates, 37 master’s degrees and 26 graduate certificates, and a mission of service to the urban community, the Saint Rose experience empowers students to improve themselves and the world around them.